That Only A Mother, by Judith Merrill, may have been the first SF Romance story about mothers. Here are some other, more contemporary takes. 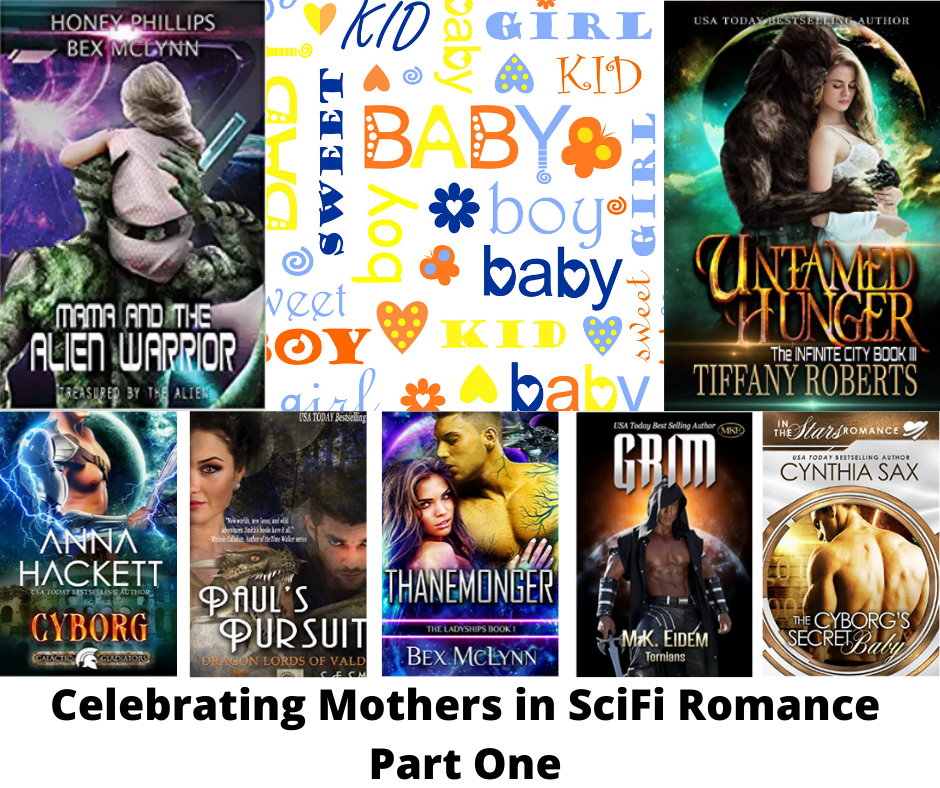 This post first appeared in the Roswell Daily Record…

When I think of the month of May, I invariably think of mothers and flowers. Not necessarily linked, although as a mother myself, I never say no to some pretty blooms. Science-fiction romance has a plethora of heroines who are also mothers and I thought this was the perfect topic for my May column. I went to the trusty Science Fiction Romance Brigade (SFRB) group on Facebook and asked the 1,400 or so members to recommend books with mother figures, including their own if applicable. 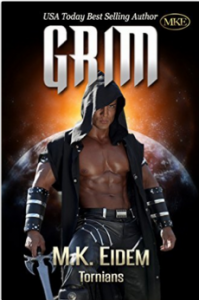 One of the first names that comes to my mind and indeed to many of the SFRB members is USA Today bestselling author M. K. Eidem and “Grim” (Tornians Book 1), which is a classic in the genre. If you’ve never read “Grim,” by all means, I urge you to go forth and try it. Lisa Miller is a widowed mother of two little girls and she was the first SFR heroine I believe I’d ever read who was a mother — being a widowed mother of two girls myself, I really resonated with her. Here’s just a portion of the blurb: “…When Lisa is discovered ‘unprotected’ at her husband’s grave, she wakes on an alien ship heading for an alien world. Refusing to accept this, she confronts the large males, demanding she be returned to her children. Seeing his chance to have a female, Grim agrees to accept and protect her offspring, if she agrees to join with him and only him. Realizing this is the only way she can retrieve her children, Lisa agrees and the Tornian Empire changes forever. …”

Lisa is a fierce mother and a strong woman who takes no guff, but neither does she back away from the bargain she’s made with Grim. The subject of her tragic loss and now being ready for romance again is well handled, I thought. I would have loved it if she’d been an actual person because I wanted her as a new best friend. She turns the alien civilization upside down, one way and another. 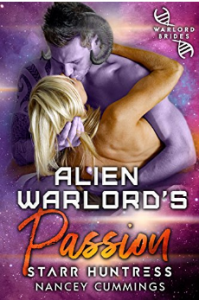 Of all the authors who responded to my question, I thought Nancey Cummings’ explanation for why she wrote her book “Alien Warlord’s Passion” (Warlord’s Bride Index Book 2) was the most “awww” moment. Nancey shared: “I wrote this one specifically because my mom — who is awesome and was a single mom raising three kids — requested a book with a single mom. I can’t tell Mom no.” A brief snippet from the book’s blurb: “…She’ll do anything for her son. Even marry an alien. Rosemary left Earth to make a better life for her 7-year-old son. She’s got a good job, a nice house, and one minor problem: She needs to marry a Mahdfel warrior if she wants to stay.”

USA Today bestselling author Cynthia Sax had a similar motivation for her novel, “The Cyborg’s Secret Baby: A SciFi Cyborg Romance In the Stars Romance.” She explained: “My awesome mom was a single mom to myself and my five siblings. I have a healthy appreciation for single moms.” Cynthia also wrote a free short story entitled “Passion Surge” (Cyborg Exploration Book 4) and here’s a snippet of the blurb: “…Nu is an extremely exhausted single mom with a fussy newborn daughter. She has no time or energy for anyone or anything else. That includes a cyborg medic with gentle hands, brilliant blue eyes, and a voice deeper than space. …”

Miz Mattie is the “outspoken, deceased” mother of the grown-up heroine in “The Felig Chronicles” by PJ Dean and I enjoy her so much I might have once asked PJ if Miz Mattie would like to adopt another daughter. As the description for the first book says, in part: “Time: post-apocalyptic America in the near future. Faustina Cain (Tina) and Nate Lowe each have their own reasons for fighting against a group of aliens, the life-force draining Felig, who have invaded Earth. For Tina, it’s personal — they took her mom. …” Don’t be too downcast, however, because the mom in question may be gone physically but she’s very present as a supporting character. 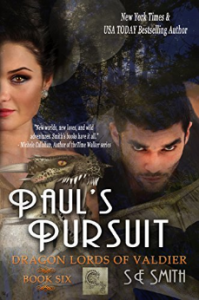 New York Times and USA Today bestselling Author S.E. Smith writes SFR novels featuring women of all ages, including grandmothers — see “Pearl’s Dragon.” S.E. had this to say about “Paul’s Pursuit” (Dragon Lords of Valdier Book 6): “Morian is willing to sacrifice anything, including her life, to protect her sons. What she does not know is that Paul, a man from another world, is the ultimate predator when his family is in danger. For when he is in pursuit of an enemy, his prey never gets away.”

Another twist here is that Paul is from Earth, Morian is the alien in this romance and his daughter’s disappearance kicks off the plot.

USA Today bestselling author Cailin Briste shares that her Sons of Tallev series is chockfull of mothers. Here’s a bit of her explanation: “… centered on a matriarchal planet run by the first families to settle the planet. It’s a wealthy bedroom planet that was divvied up by the women who bought the settlement rights. Men are denied many rights. Aristocratic men are expected to marry and take care of their children while the wife pursues a career or the family business.” The first book in the series is “Shane: Marshal of Tallev” and here’s the beginning of the book’s blurb: “Can’t a guy get a break? Shane Tiernan, the Beast of Tallavan aristocratic society, needs relief from the matriarchal rules that are destroying his life. …”

Maybe a little too much mothering in that world! Cailin goes on in her note for this article to add that “…Each of the men in the Sons of Tallav books comes to an accommodation with the matriarchal rules of Tallav with their mother’s help. But by the end of book No. 4, they realize that despite the satisfaction they find in their own lives, they must do more for all the sons of Tallav.” 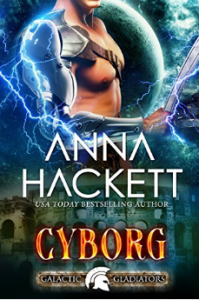 Another personal favorite of mine is USA Today bestselling author Anna Hackett’s “Cyborg” (Galactic Gladiators Book 10) in which, to quote the book’s logline: “Scientist Ever Haynes was shocked when she was abducted by alien slavers, but the last thing she expected was to find herself pregnant with a cyborg’s baby.”

Add to this the fact the cyborg in question — who I think is one of my favorite heroes in this series — has no memory of their night together while both were being held as prisoners.

USA Today bestselling author Tiffany Roberts says of her novel “Untamed Hunger” (The Infinite City Book 3) “Our heroine is working to make a better life for her and her baby, and finds love, protection and security in the arms of a gruff, insanely attractive Azhera, who’ll tear the world apart to keep his mate and ‘cub’ safe.”

Several people recommended Bex McLynn and Honey Phillips co-written book “Mama and the Alien Warrior” (Treasured by the Alien Book 1. The blurb sets forth the beginning of the story as follows: “…Abby Wentworth never regretted abandoning her corporate career to adopt her orphaned niece and run a maternity home. But she certainly never expected to find herself and her girls abducted by aliens.” 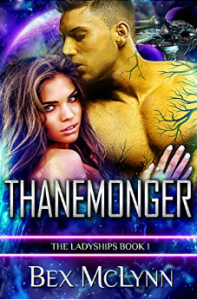 Bex McLynn penned another of the highly recommended novels with a mother, “Thanemomger” (The Lady Ships Book 1) and sums up her unusual plot: “My single-mom heroine was abducted by aliens and is determined to return home to her son. Along the way, she becomes a mother figure to the alien commander’s teenager and a new infant/toddler sentient warship.” Sounds like a lot of motherly multitasking. And of course, there’s romance.

USA Today bestselling author Regine Abel was mentioned both for specific titles in her Veredian Chronicles series and also for “Krygor’s Hope” (Braxians Book 3), which Regine says features a mother doing everything to protect her teenage daughter.

A “Dense Bullet of Something” Blasted Holes in the Milky Way