Space opera, futuristic dating apps, redemption for villains and more are sure to heat up an already steamy August

We’re still in the official 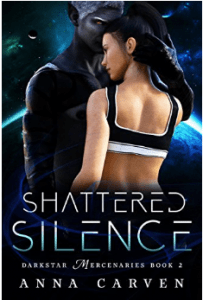 ‘dog days’ of summer but there’s no slowdown in the release of hot new science fiction romance titles to distract you from the weather!

One of my autobuy authors is Anna Carven – her Kordolian soldiers are truly big and bad and I never get enough of stories about them. She’s just released Shattered Silence (Darkstar Mercenaries Book 2) and of course I one-clicked. Here’s the plot: Enki Zakanin just wants peace and quiet. He’s completed his mission, and on the journey back to the Kordolian Fleet Station, he’d prefer to be left alone so he can manage the literal demon inside his head.

So when a strange distress call breaks the silence, his first instinct is to ignore the signal. Why would anyone be foolish enough to broadcast an open signal in the Ninth?

My name is Layla dela Cruz. I need your help.

A human? What in Kaiin’s Hells is she doing this far into Sector Nine?

Now, somehow, he has to go and get her.

After all, he’s given her his word. 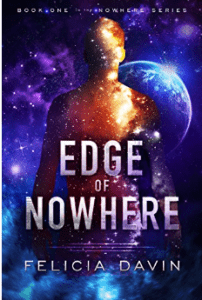 For something different, try Edge of Nowhere by Felicia Davin. When I first read the plot synopsis for this book, I thought it was going to be along the lines of the movie “Transporter” but with a M/M romance. As it turned out, the fact that the hero Kit, can transport people and objects and the other hero Emil is to be transported sort of against his will, is where any similarity of story stops and the unique science fiction adventure begins. I thoroughly enjoyed this book, want to have dinner at the restaurant that serves as Kit’s home base and generally socialize with all the characters. I can’t wait for the sequel, although there’s a Happy for Now ending and no cliffhanger. The story: Kit Jackson has two talents in life. He can navigate the void known as the Nowhere to teleport himself across long distances and he can keep his mouth shut. These talents have earned him a reputation as a discreet, reliable Nowhere runner—he’ll smuggle anything for the right price—and that’s how Kit likes it. Morals don’t earn money, and neither do friends. When the private research firm Quint Services makes Kit an astounding offer for a mystery delivery, he says yes.

The parcel turns out to be an unconscious man, and even for Kit, that raises questions. When something monstrous attacks them in the Nowhere and throws them into an unknown wilderness, Kit and this stranger, a man named Emil, have to rely on each other. Kit just wants to make his delivery and get paid, but he finds himself increasingly entangled in Quint Services’ dangerous research—and his own attraction to Emil.

Emil Singh left his career in the Orbit Guard to work at Quint Services Facility 17, a base hidden in an asteroid, to prepare a team to cross the Nowhere into other worlds. It’s the chance of a lifetime and he can’t wait to explore the universe. But then Emil witnesses a terrible accident in a Facility 17 lab and gets sent to Earth for questioning. Something isn’t right, but before Emil can investigate, he and the Nowhere runner hired to transport him are knocked off course. Is the monster that attacks them a creation of Quint Services? What else is the corporation hiding? He has to get back to Facility 17 to protect his team and he needs Kit’s help. Can he trust the cynical young smuggler? 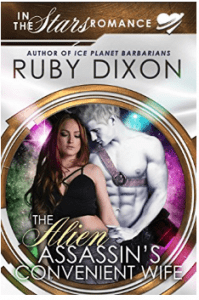 Two science fiction romance powerhouses, Ruby Dixon and Michelle Mills, have combined to create a team of alien assassins and write two novellas set in the shared world. To start with author Dixon, here’s the blurb for her Alien Assassin’s Inconvenient Wife (An ‘In the Stars’ Romance Novella): One half of an intergalactic assassin team, Jadzion heads to New Mexico for his target while his brother Heriot heads to California. They’ve traveled millions of miles and through star systems to find their targets, who are gun-runners on a galactic scale. Now, though, Jadzion has a problem. He’s waited until the last minute to go planetside, and his target’s at a couples retreat.

The solution is obvious – Jadzion needs a wife. Just for the weekend, of course.

Using a thing called a ‘dating app’ he finds a woman named Jenna. He tells her he needs to marry her, right away. Jenna, naturally, is confused. But the longer she’s around Jadzion, the more she thinks he’s not from around here…and that he just might be the one for her. 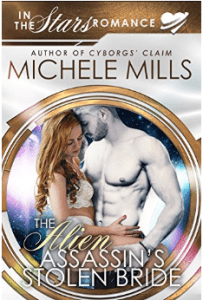 And Author Mills’s Alien Assassin’s Stolen Bride: In the Stars Romance unfolds thusly: Hannah’s having a bad day. Her friends have ditched her, and she’s stuck going on a tour of Hearst Castle. And she ends up seated next to a muscle-bound, dangerous-looking man dressed all in black, with pearly-white skin and silver eyes.

Heriot is an assassin known for his one hundred percent kill rate…and his grim disposition. He’s all work and no fun, according to his brother and partner, Jadzion. And he’s all business as he tracks down his latest target on some filthy backwater planet called Earth. He’s got two diurnal cycles to take out his target, so there’s not a lot of time for shenanigans.

He didn’t expect to find his true mate during the middle of this hit. He didn’t expect her to be a stunning human female who could gentle his stern demands. And he didn’t expect to be reduced to a raging, rutting beast on this mission. Can he convince his innocent mate to return with him to his home planet before his time is up, or will he be forced to steal her? 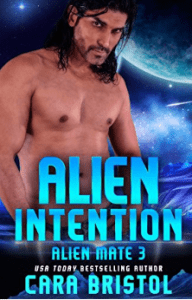 Cara Bristol continues her Alien Mate series, with Alien Intention, the third novel.  She’s taken on the challenge of redeeming the ‘bad boy’ villain from the previous book, Romando, and making him the hero this time. (The books are standalone but it does help to have read the previous stories.) Here’s the plot: Our attraction unleashes a perfect storm…

I’m Stormy Weathers. My love life on Earth is one natural disaster after the other. I’m attracted to bad boys, rebels, commitment-phobes. In a crowd of choirboys, I’ll manage to find the jerk. All I want is a man who’ll love me and my young son, so I’m going to an icy planet to become an alien’s mail-order bride. This time will be different! The chemistry I feel with Romando is electric. It doesn’t matter what my sister or her mate or their tribe says, mutual attraction this strong can’t be wrong, so I’ll do anything to get him…

I’m Romando, an outcast in my own tribe. One rash, angry act turned me into a pariah and almost got me banished. But what everyone resents the most is that I’m one of the lucky few who’ll be getting a mate. The instant Stormy Weathers blows into Dakon with the other Earth females, my horns tingle. She is meant for me, but I resist the instinct to claim her. You see, she’s related to my nemesis responsible for my outcast state. Honor and pride dictate that I reject her as a suitable mate before she undermines my good intentions. If only I could get her out of my mind… 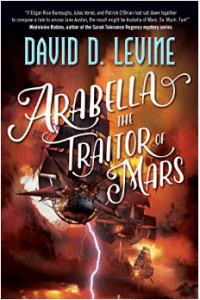 I always like to include some steampunk in this column and this month brings us Arabella The Traitor of Mars (The Adventures of Arabella Ashby) by David D. Levine, which strictly speaking isn’t a romance but does have a romantic couple at the heart of the story. Here’s the blurb: The tyrant, Napoleon, has been defeated with Arabella and the crew of the Diana leading the final charge. But, victory has come at a tremendous cost. Britain’s savior, Lord Nelson, has not survived the final battle and the good people of the Diana must now return to London as both heroes and pallbearers.

At last husband and wife, Arabella and Captain Singh seem to have earned the attention of great men, ones who have new uses in mind for the Mars Company captain and his young wife. Both Company and Crown have decided that it is time to bring Mars into the folds of Empire, and they think Singh is the perfect man to do it.

Now, Arabella must decide between staying loyal to the man she loves and the country of her father or betraying all that she has known to fight alongside the Martians in a hopeless resistance against the Galaxy’s last remaining superpower. 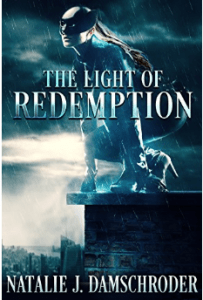 A quick mention of The Light of Redemption, a superhero/superheroine fantasy by Natalie Damschroder. The story: Harmony Wilde is a unique kind of superhero. She operates as Eclipse in a small town in Ohio instead of the big city, on her own instead of on a team, and in near-complete anonymity. For the most part, she’s satisfied with using her ability, manipulating light, to bust drug dealers, and prevent drunk drivers—until Conn Parsons comes to town.

Conn has been a superhero all over the world. Dissatisfied with the little bit of good she can do in comparison, Harmony asks Conn to train her. He refuses, feeling responsible for superhero and civilian deaths in big-city incidents. He doesn’t want to risk the same thing happening here. But the attraction between them is hard to fight, and so is her determination.

Then small-town problems get bigger, and it looks like both Eclipse and Conn are being targeted by CASE, the Citizens Against Superhero Existence, who are responsible for those city disasters. When her town seems destined to become collateral damage and the stakes get personal, Harmony must tap undeveloped powers and convince Conn to work with her to stop their mutual enemy. The only problem is that when they succeed, it may give Conn the redemption he needs to move on, away from Pilton . . . and away from Harmony.

Stay cool with the iced beverage of your choice and happy reading!

Review: Jani and the Greater Game by Eric Brown