In this week’s viewing: Steins;Gate and Attack on Titan leave their protagonists behind, one show has mysteriously disappeared, and more! 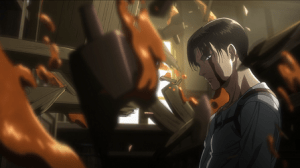 Attack on Titan #39 – One of the things that set Attack on Titan apart from a zillion other fighting shows when it first appeared was the action-scene potential of the scouts’ maneuvering gear. So just because they’re going up against non-Titans this season doesn’t mean the 3-D fight sequences are going away. Instead, they’re getting even wilder and more amazing. The only question left at the halfway point of the episode is, how is it ever going to top that?

While the director ponders that question, things settle down a bit and take on the familiar shape of a conspiracy thriller. Torture is bad and useless beyond a certain point when the bad guys do it, but once the good guys pick it up it’s necessary and always works eventually. Yeah, Armin seems to be suffering some psychological damage right now, but I expect him to be completely fine with it in another episode or two.

Vague hints have already been dropped about Historia knowing too much, but we finally have the whole reason why: She’s the real heir to the kingdom. Not clear yet is how that plus a conversation between two people from outside the walls equals Eren getting eaten.

More tantalizing clues to what’s coming are in Sannes’s seemingly random selection of victims to mention. By the next-episode preview, it appears the teacher was Erwin’s once upon a time. The one woman appears to be Historia’s mother in the closing-credits sequence. I don’t think we’ve heard about the couple who tried to fly before, but it certainly makes sense that the security forces have been suppressing some kinds of technology. I wonder, with the focus on everyone’s backgrounds all of a sudden, if that couple might have been Armin’s parents. 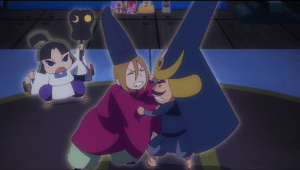 We Rent Tsukumogami #2 – Another mysterious phenomenon crops up and, just like an Edo-era X-Files, of course the answer is that it’s caused by tsukumogami. This time, they’ve been taking on the personalities of the legendary figures they depict and doing crossovers at night. Unfortunately, the antiques world of the time does not appreciate mashups, and it’s all solved by getting Princess Kaguya to get over herself and impose some order. (For viewers unfamiliar with The Tale of the Bamboo Cutter, Kaguya was obsessed with the moon; eventually it was revealed that it was her true home.)

It’s nice to see that we’re not done with Katsusaburō and Sanae. In fact, from the preview, it looks like they’ll be a part of the story for some time. I take back what I said about their plotline being rushed. I hope that we get to know Sanae better, and she isn’t just a difficulty cropping up in a tale that’s centered on Katsusaburō.

Another thread is the mysterious Suō, which turns out to be an incense burner tsukumogami. Clearly O-Kō and Seiji have some unresolved history with him. Did he leave them? Was he taken from them? 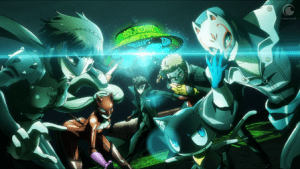 Persona5 the Animation #17 – X-Day is rather anticlimactic since it turns out the Phantoms haven’t just gained an elite hacker, they’ve got someone who knows Medjed inside out, literally. But the conclusion to Futaba’s arc is pretty epic as she goes all Ancient Aliens, manifests a Persona as a UFO, and starts subverting her own psychic construct.

The realization about Wakaba’s suicide note being faked neatly brings Persona5 back to its theme of punishing horrible adults who take advantage of kids. It’s also one of several hints being dropped that she’s connected to whatever it is that allows the Phantoms to operate in the psychic world. Wakaba died around the same time that the “mysterious incidents” the Phantoms are characterized as part of began. Futaba has to have gotten or constructed the Navi app from the research her mother left behind.

The mysterious person in the black mask, then, is connected to whoever Wakaba was working with. I’m still leaning toward it being Akechi, but it’s also possible Akechi was hired by the people who arranged Wakaba’s death. 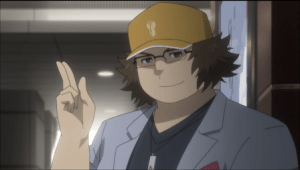 Steins;Gate 0 #15 – Desperate to see her parents get together before she has to move on, Suzuha calls in all the resources she can get. Feyris contributes the idea of playing to Daru’s movie-savviness by stealing a development from Back to the Future. Though you’d think, if this crew knows that much about movies, that they’d be familiar with the trope of what happens when the uncool guy tries to impress the girl by getting a total makeover.

What makes it all worthwhile is the moment when Daru is about to implode into a black hole of self-loathing and transform into a bitter incel, and then suddenly shows more depth and maturity than he’s displayed in the previous 38 episodes of Steins;Gate and Steins;Gate 0 combined. It’s like the tension on a catapult has been ratcheting up all this time, and suddenly the rope’s been cut and he’s been flung into adulthood.

And where is Okabe during all of this? Being flattered and cajoled by Leskinen, trying to be a good student and earn a highly prestigious overseas study opportunity. And not asking urgent questions like, say, what exactly is going on at the hospital that requires a bunch of difficult people to all be in separate rooms?

I think We Rent Tsukumogami is going to be a perfectly fine addition to the lineup, so we’re set!

Or we should be, except for the mysterious disappearance of The Journey Home. Crunchyroll hasn’t provided an explanation of why there’s nothing new this week, so hopefully it’s just technical difficulties or a planned break…

Washington gets attacked tonight by flying saucers with death rays!