Brad Lansky and the Rogue Era by J.D. Venne is not just a story to be read or heard, but a work of fiction that is meant to be experienced. 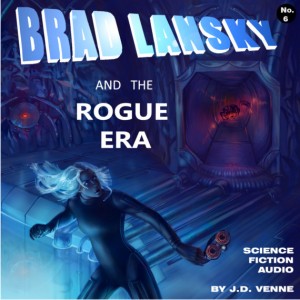 Brad Lansky and the Rogue Era by J.D. Venne gives fandom a unique outlet for getting their Science Fiction fix. Published under the Protophonic banner, this is more of a theatrical production than a work of literary fiction.

Presented in an audio format that runs for about an hour and forty-five minutes, listeners will be treated with stage acting reminiscent of the old radio broadcasts of the mid 1950’s. Whether you actually lived in the era of the early radio dramas or simply tasted the medium through historic recordings, you probably know that there is nothing quite like it.

The mind’s eye has an uncanny knack for visualizing the unseen through the ear just as well as the written word. Face it, even hearing recordings of the crackling performances coming out of the old monophonic radios can influence today’s listeners to envision a black and white image. And the actors relying on “over-acting” to enrich the story sometimes made the experience believable in a strange kind of way.

But where this Protophonic version differs from the typical classics from the past is the current technological advances in audio presentation. Brad Lansky and the Rogue Era is not one of those audio books you can listen to in the car on your way to work. It is clearly presented in a format best suited for the listeners who dons earphones, closes their eyes and lets the work develop in their mind.

At first, listeners are provided with an electronic musical score reminiscent of the pioneering sounds Louis and Bebe Barron once brought to us back in 1956 with the popular film Forbidden Planet. This transcending sound also provides a special effect to the story, allowing the listener to be absorbed under an aural blanket. This method will turn listeners into passengers of the journey rather than just being witnesses.

The story is a well-blended mixture of science fiction, mystery, and the social significance of artificial intelligence. A rogue planet is on a collision course with Earth. Not a ground breaking plot, but it fits well with the other elements. The mystery stems from the origin of this cryptic planet and why it went unnoticed for so long. And the social aspect of the story evolves within the conflicting power between human decision making and that of artificial bio-human life. The story is not so complex that it takes away from the overall theme, but together, these elements include some interesting ideas that will give listeners reason to pause and think.

It should also be pointed out that the story is presented in fifteen tracks resembling chapters. Each short installment plays like an individual cliffhanger with some shorter than others, increasing the tension as the pace quickens.

Production credits for Brad Lansky and the Rogue Era are listed as:

Brad Lansky and the Rogue Era is not just a story to be read or heard, but a work of fiction that is meant to be experienced. For fans of the unique and unexpected, this production will be a new experience that many will want to explore more.

SF Signal is a phenomenon.  This past year at the Chicon 7 Worldcon, the website was nominated in two categories – Best Fanzine and Best Fancast – and walked home with the honors in the Fanzine category, the first website to do so, and in its very first year of eligibility.  1,922 Hugo ballots were […]