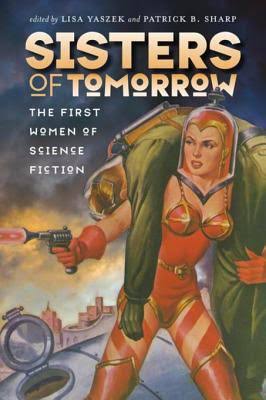 That review copy was forthcoming and I have now had the pleasure of reading through it. It’s a hybrid anthology, presenting an academic look at the “first women of science fiction” along with a collection of representative stories, poetry and art(!). I’ll not review the tales as many are of academic interest only (except of course for pulp fans), but I will address the historical analysis portions of the book.

Of late (referencing perhaps as much as the past decade), the science fiction community – fans and pros alike – have been engaged in various attempts to open the genre up to more representation among minorities. We’ve learned (if we weren’t aware already) of unconscious bias, of institutional bias, of the fact that when men assess the parity of a gathering they more often than not see such parity among the sexes when none exists (frequently stating the mix was even when in fact it was 2/3rds male); we’ve demanded that our convention panels work hard to represent at least both sexes (if not races and genders) and we have learned, whether we admit it or not, that women in the field simply do not receive an equal share of attention, notoriety, opportunity or even mere acknowledgement.

Critics of this complaint have often responded by “blaming the victim:.”  They (women) should use a pen name to avoid unconscious bias. They should have more confidence in themselves and submit more frequently. Women need to try harder….

Sisters of Tomorrow makes it clear that not only have women been trying harder for at least forever, and particularly for the past century, they’ve actually accomplished quite a bit that we are not at all properly familiar with.

To put a fine point on it: reading this book will force you to confront your unconscious biases head on. The first several pages of the introduction might be more appropriately titled You Had No Idea as it relentlessly catalogs the enormous accomplishments of what it describes as at least a “16th of the sf community”:

Publishing successfully in a male dominated field (that itself resides in a male-dominated society) was not enough for them. Many of these women went on to acquire degrees in traditionally male fields (at a time when the franchise for women was a new thing!), broke convention, won awards, pioneered fields of inquiry and accomplished more than most men whom we laud as leaders in the genre.

You will ask yourself “why haven’t these authors been regularly held out as giants of the field like Asimov, Clarke, Bradbury….”.  The answer will unfortunately be “because they are women”.

And that’s a horrible tragedy when one thinks about how much more they might have been able to accomplish if they’d had full equality of opportunity.

We’re supposed to learn from the past. Sisters of Tomorrow teaches this lesson: women have shaped our genre just as much (and perhaps more so in many ways) than men. We’ve taken their gifts and short-shafted them.  If we stop doing that, we’re likely to receive even more benefit from them.

Now for the fun part: I was absolutely tickled when I read the following:

…while women published in almost every one of these magazines [turn-of-the-century pulps], their work appeared most prominently in three key venues. Authors who specialized in scientific extrapolation gravitated towards magazines founded by Hugo Gernsback, including Amazing Stories, Amazing Stories Quarterly and Wonder Stories.

Gernsback is lauded for his inclusion of female authors in his science magazines and his regret that women’s science education was so limited is noted. Nice to hear that the magazine has always been an open and encouraging venue!

The comprehensiveness that went into the research for this volume is revealed shortly after Gernsback gets his kudos: Did you know that Lilith Lorraine wrote for the debut issue of The Comet, the very first fanzine? No?  Join the crowd.  I’m glad to have been informed of this nugget.

And guess what? Many female writers were attracted to science fiction in exactly the same way Asimov, Bradbury and Clarke were. They saw a copy of Amazing Stories on the newsstand! C.L. Moore spied a copy of Amazing. Virginia Kidd a copy of Wonder Stories. (And if you aren’t aware of the influence of those two women on the field, you absolutely are living in a bubble, probably blown from pure testosterone.)

Yaszek and Sharp use this volume to weave together the influences of society, economics, first gen women’s lib and a host of other factors at play to illustrate that the advent of science fiction – portender of the future – was uniquely positioned to provide unprecedented opportunity and to illustrate, quite clearly, that these pioneering women took full advantage of those opportunities, while enriching the genre at the same time.  Unlike their male counterparts though, they have not received the attention, nor the admiration, they deserve.  This volume goes a long way towards redressing those faults, but will only have its full impact of the community reads it and acknowledges it.

The remainder of the book looks at groups of these pioneers, focusing on their primary activities in the field – author, artist, editor, agent, poets, etc.

Sisters of Tomorrow is an excellent “field guide to the history of women in SF”, complete with color plates of some of Margaret Brundage’s work (oh yes, that’s a name that ought to ring a bell!). Some of the stories may seem a bit dated, but then they are being used as exemplars rather than entertainment in this context. It’s going to be a long time before a more comprehensive volume becomes available.

I’ve always said that I believe history serves as guidepost to the future. It’s a very poor guide that only shows you half of what you need to know, which has been our state of affairs until Sisters of Tomorrow came along.  Fill in your map and you won’t get lost so much.

For anyone interested in the true history of our science fiction genre, Sisters of Tomorrow is INDISPENSABLE!

Sisters of Tomorrow us exactly the kind of work that ought to be nominated for a Best Related Hugo award.  If you are nominating this year, give it some attention!