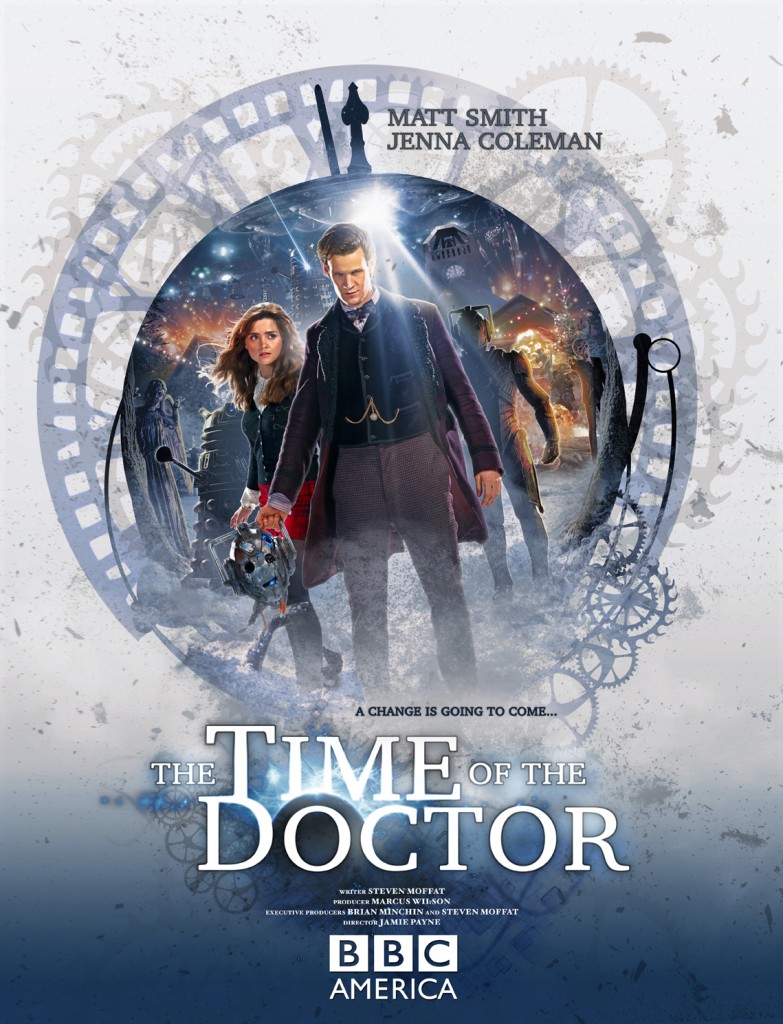 Christmas Day at the BBC wasn’t so much ‘The Time of the Doctor’ as the Day of Jenna Louise Coleman. For Jenna Louise Coleman co-starred as usual in Doctor Who, then reappeared later in the first episode of a three part, three hour adaptation of PD James’ Death Comes to Pemberley.

Doctor Who was a special Christmas Special, burdened not only with delivering the usual festive froth Christmas Day episodes of the programme are obliged to provide, but also serving as a farewell to Matt Smith’s Doctor and a welcome to Peter Capaldi. The plot was barking, but as ever had some clever touches.

On a planet of some significance there appears to be just one small town. An old fashioned alpine settlement called Christmas, where it seems to be Christmas all the time and the people seem to do nothing but wander about aimlessly. Meanwhile on Earth Clara is having a bad Christmas Day. She has told her family she has a boyfriend, who they are expecting to meet. Problem one is that she made the boyfriend up. Problem two is that the turkey isn’t going to be cooked in time for Christmas dinner. Perhaps the Doctor can help with both difficulties. Cue comedy hijinks involving holographic clothes.

‘Meanwhile’ the Doctor ends up stuck in the town of Christmas for centuries, while Clara pops over every so often on what is for her the same Christmas Day, to witness the Doctor getting ever older. It’s one of Steven Moffat’s very best episodes, ‘The Girl in the Fireplace’, reworked as a Christmas turkey with the Doctor as the Girl.

While it doesn’t make a lot of sense it manages to all be quite moving. And along with the kitchen sink Moffat throws the greatest villains in again, wasting the Weeping Angels, Daleks and Cyberman in another easily resolved monster mash. There is an attempt to tie up lots of semi-forgotten unfinished business, though the explanations for the ‘Crack in the Wall’ and the role of The Silence in the events of a couple of series back feel like afterthoughts, rather than something planned from the start. That said, perhaps a close rewatching of ‘A Good Man Goes to War’ will make sense of everything, and reviewing the early Smith episodes may reveal foreshadowing of a grander design.

As for the actual centuries long siege of Christmas (the town), I was left wondering how the townsfolk held some of the most dangerous menaces in the universe off for so long with… well? What? The mechanics of the conflict are glossed over, and the episode dramatically implausible as anything other than a touching fable regarding the Doctor growing old, being reborn, saving the world. You know, on Christmas Day.

Matt Smith bowed out magnificently. Coleman was very good as usual, and the few seconds we saw of Capaldi’s Doctor gave hope that he will bring something of the years of wisdom and experience of Smith’s eventually many centuries older Doctor to the programme.

Then it was over and Coleman was back in a sequel to Pride and Prejudice. I wouldn’t normally mention it on Amazing Stories, but it had the Doctor’s companion, or at least the actress who plays her, talk of a ghost, a relationship with fan fiction and was based on a novel by the author of SF novel The Children of Men. I thought that was a ludicrous book, a half-baked rehash of Brian Aldiss’ Greybeard saddled with so ridiculous a central idea that nothing could salvage it. PD James is a gifted writer of conservative crime fiction. She hasn’t a clue about SF. All acclaim to the contrary I thought the film of The Children of Men a mess, unable to survive the preposterousness of its premise.

When you or I write a story based on a pre-existing novel it is fan fiction. When a ‘name writer’ does the same then the result is a sequel by another hand, and can be an ‘acclaimed publishing event’. Death Comes to Pemberley is PD James’ sequel, set six years after the end of Pride and Prejudice. The BBC decided to lavish money on an adaptation shown on three consecutive evenings at peak time over the Christmas holiday. This was event television, designed to capture the huge audience for all things Jane Austen and circumvent the problem that Austen wrote only six novels. All of which have been adapted at least once, most several times, over the last two decades. That Death Comes to Pemberley wasn’t worth filming is besides the point. The BBC needed some costume drama for Christmas.

It was all started by the 1995 BBC adaptation of Pride and Prejudice. Before that Jane Austen was not such a big deal. People tend to forget. Prior to 1995 she was just another popular classic writer. Not the ‘Greatest Female Novelist in History’ (Trademark). Given all that the BBC decided to saddle their new production as a homage to the 1995 Pride and Prejudice. But without the same cast, nor with actors of the charisma of Colin Firth and Jennifer Ehle as Darcy and Elizabeth. And to shoot digitally, rather than on film. With fashionably colour processed flashbacks. And a misjudged ‘modern’ musical score by The Insects which ranged from action movie generic thuds to inappropriately overwrought vocal selections. But style and a shocking lack of subtlety aside, the whole was wrecked by the story, a plodding crime procedural littered with anachronistic dialogue which felt nothing like Austen. Coleman gave the thing some spark as Elizabeth’s sister, Lydia (which is why it is worth a mention here at all), but why the BBC wasted three hours on this nonsense then a couple of days later crammed an adaptation of Diane Setterfield’s superbly strange and decidedly lengthy Gothic debut novel The Thirteenth Tale into 90 inadequate minutes remains a mystery in itself.

I wrote about the BBC celebration of the 50th anniversary of Doctor Who here. Come back next week when I’ll be reviewing the BBC’s TVM of The Thirteenth Tale.