Home Review ‘From the Adventures of Luke Skywalker’: the Star Wars novelization 40 years... 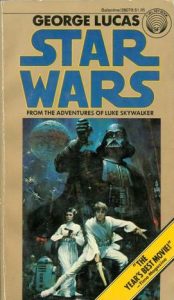 What if I suggested that one of the most influential of all genre novels was not an original SF book at all, but an example of that most derided of literary forms, the film novelization?

I may be exaggerating just a tad, but surely the novel of Star Wars – the 40th anniversary of whose publication passed with little comment recently – must have been one of the best-read and most re-read SF books ever. And it is surely partly responsible for the fact that the Star Wars phenomenon took off the way it did.

Star Wars: From the Adventures of Luke Skywalker bore the name of George Lucas on the cover, but it was not his book. It had been ghost-written by Alan Dean Foster, who was prepared to accept an offer of $5,000, no royalties and no credit.  Others had turned it down, including Lucas’s University of Southern California pal Don Glut, who said later that “for the next few years, I kept kicking myself, like Lugosi after he turned down Frankenstein”.

The Star Wars novel was really part of a successful marketing campaign, conceived by George Lucas’s merchandising and publicity supremo Charles Lippincott and by Lucas himself. Del Ray had been prepared to publish it and Lucas hoped a novel might help attract genre fans to the film.

Lucas has said he believed there were enough SF fans in America to recoup $8 million of the film’s $10.5 million budget. These were people who would go to see anything with a title like Star Wars. Lippincott had taken artwork and stills to conventions, hoping to engage the enthusiasm of the fan scene that was well on the way to getting Star Trek revived.

From the beginning, the reader gets the impression Foster was trying hard to appeal to fans of literary SF, with a prologue recounting the history of the Empire and said to be an extract ‘from the First Saga, Journal of the Whills’ . The opening sentence of chapter one –  “It was a vast, shining globe and it cast a light of lambent topaz into space – but it was not a sun” – tells us this is a book that won’t make too many concessions to young readers. Loquacity, actinic, mahouts and sussuration are just some of the words that would have sent a young fan like me scurrying for a dictionary.

George Lucas had read a great deal of SF during the lengthy process of writing Star Wars, but he wasn’t a fan of it all. He had happily scavenged literary SF for ideas but he believed the genre was often not enough fun. He was bolting the imagery and setpieces from these works onto an idea that he had conceived after being frustrated in his ambition to remake Flash Gordon, so it’s odd to see how the novel practically begs fans to take it seriously. 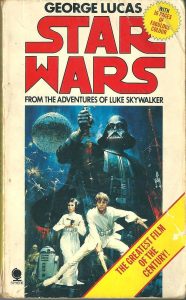 The film was originally due for release in December 1976, but that date was pushed back to May 1977 – with the result that the book came out a full six months before the movie. Industrial Light and Magic was still very much in the thick of creating the visual effects at the end of 1976, so the effects crew would have been reading about scenes they had yet to create. That opening paragraph, in which the Rebel ship is pursued by an Imperial star destroyer, was describing something that wouldn’t be shot until the book had been out for four months.

These days, people tend to be most interested in the novel for the various points of departure from the official Star Wars back story as we now know it. The prologue to the novel was the first place we encountered the name Emperor Palpatine, though it described him as the latest in a  succession of weak-willed leaders being controlled by sinister forces. The book includes all the scenes discarded late in the making of the film, including the sub-plot about Luke Skywalker’s childhood friend Biggs and the meeting with Jabba the Hut (as it is spelled in the text).

Does it work as a novel? Despite a sometimes uneven tone, I think it does, because Foster is so keen to narrate it as a literary work rather than just transcribe the film. Of course, if you were a child in 1977, a transcription of the film is exactly what you wanted, and when I read and re-read the novel, I was merging Foster’s prose with the Marvel Comics adaptation and my own memories of the film to create the best mental approximation of the movie I could muster. Millions of other young readers did the same, whether or not they ever got around to reading the literature which George Lucas drew on when writing Star Wars. For that reason, the first instalment of The Adventures of Luke Skywalker is central to an awful lot of people’s SF experience.