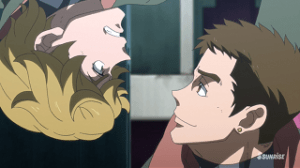 Mobile Suit Gundam: Iron-Blooded Orphans #19 – With one last barrier between Tekkadan and Earth, Eugene is right, it’s time to be awesome! (Though that brain hemmorhage says it’s possible to be a little too awesome.) Everyone and everything is needed to batter their way past the home guard and finally get Kudelia within a few miles of Earth’s surface.

It helps that Carta’s fleet has been organized for everything but combat effectiveness. Not only is the commander fond of meaningless ritual, the suspiciously high number of blond guys on display, right after a flashback showing that she thought Fareed was kind of cute, suggests that her choice in personnel has very little to do with their usefulness on a battlefield.

Speaking of that flashback, it seems that Fareed is yet another person who was orphaned and adopted into a new family. Although high society is comfortable with him these days, his insistence that Montag is his “real name” says that he sees himself as just as much an outsider as any of the protagonists.

If the name Montag sounds vaguely familiar, it’s probably because that’s the name of the main character in Farenheit 451. If that’s a clue to what Fareed is really up to, I haven’t figured it what it means yet. 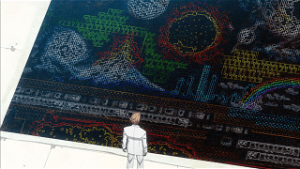 BBK/BRNK #6 – The consistent message in this series from the start has been that one does best working with others. Reoko and Migiwa have both paid a steep physical price for operating buranki alone, and the new crew of Ōbu couldn’t begin to stand up to Reoko until they were all working with a common purpose in mind. Moreover, Migiwa’s choice to take Ōbu to the promised land all on her own had terrible repercussions. It broke Hīragi’s father; it may have done the same, a little more subtly, to Kogane’s (he sure didn’t put up much of a fight when Matobai found him).

But, says this episode, it’s okay to keep being your own weird self while being part of the group. Shizuru may not be so great at communicating with other humans, but she’s a fearsomely talented artist and fighter.

And it turns out her counterpart from Entei is her uncle. If, as the show seems to be suggesting, Azuma and Kaoruko’s father came from the family line tied to Entei’s heart, that makes two out of five components where the families have married. Maybe all five pairs are related in some way and this is just one great big screwed-up family reunion.

Meanwhile, Reoko wakes up but is not herself at first. Literally, maybe. I think that was Kaoruko for a moment. How much do Reoko’s lieutenants know? Matobai previously reflected that Reoko is the same physical age that she was 24 years ago when she fought Migiwa. I’m really curious whether she verifiably looked that way the whole time, or if her minions dispersed for a while and came back to find that she still looks the same now. If she took over the body of a relative who is now actually 16, but they weren’t around to know, it would explain why Matobai is so puzzled by Reoko suddenly speaking like a little kid for a minute. 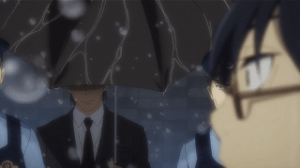 ERASED #6 – Satoru finds another friendly ear with Sawada, Sachiko’s old colleague from the TV station. If the Red Eyes of Evil were not a clue that maybe Satoru should think twice about trusting him, there’s also his suspiciously detailed knowledge of the disappearances. How was he able to find out what really (allegedly) happened to Kayo?

He’s definitely not the same person as Nishizono, at least; he’s none the wiser about Airi’s escape when he enters the hospital, after the person in the mysterious black car (who I’m presuming is Nishizono) has already seen her leaving.

At least this gives Satoru a chance to learn a little more about the murderer and the evidence that convicted Yūki. Apparently there were photos taken of the dead body and planted in his room. By the way, you noticed that Sawada has a whole bunch of photography paraphernalia lying around his office? Can’t think why the director would want to make a big deal about that…

After a very meta discussion about the manga Satoru wants to right, he’s cornered again and about to make another time jump. Does he get another chance to save Kayo, or can he only go back once, and now has to jsut try to save his other friend? Given the meta discussion, I think he gets another chance with Kayo. 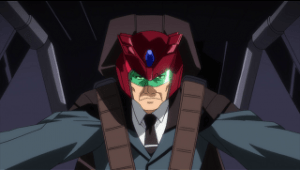 Active Raid #6 – All right, so Funasaka was terrible at being James Bond last week. But that’s because what he really wanted to be was a giant robot pilot. When Logos arranges for one of a pair of ’80s-style mecha to be stolen, and Funasaka’s childhood dream has already been revealed, it is inevitable that the second one will be hastily put back into service with him at the helm.

It is also completely necessary for the stolen mecha to be cornered in Akihabara, the geek district of Tokyo, and for the confrontation to play out in a whirl of ’80s-style direction and music. That was a thing of beauty.

And while fans of a certain age were being distracted by the nostalgia, Active Raid may have snuck an important clue or two in there. In the first episode, it was mentioned in passing that chunks of Tokyo had been rendered uninhabitable by quicksand. Now it’s mentioned again, with a vague reference to it being related to the abandonment of giant robot development. And Logos had directed the pilot of the stolen robot to head to one of the quicksand areas.

It sure would be great if one of the team could sit down with the head researcher and ask him some probing questions about his work. Oops… 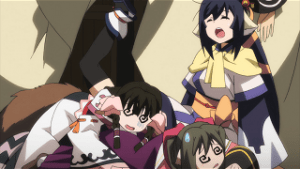 Utawarerumono: The False Faces #19 – Even war isn’t enough to make this show put on a straight face for long anymore. The only truly serious moment is Haku checking with Kuon that she’s still okay with the whole complicated situation, and Kuon being absolutely certain that she knows the key to stopping the war.

Once ashore and free of Atui’s overly enthusiastic father, the supply convoy forms up and nervously marches into enemy territory. Which lasts until Kokopo spots her old friend the tiger and our heroes are all conveniently whisked away to the safety of Munechika’s fort. I guess the rest of the convoy can now be safely massacred to make some kind of point while not putting any named characters in danger. Screw you, redshirts!

Now we’re getting down to it: don’t think Bob Heinlein had this in mind when he said that author’s competed for “beer money”…