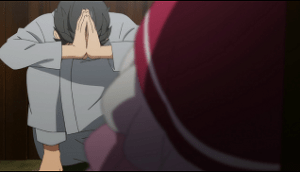 Re: ZERO -Starting Life In Another World- #5 – So the cycle begins anew. Reliving the last five days, Subaru hits most of his previous high points, starts learning to read in addition, gets full of himself, and thus is set up for yet another agonizing death. From the amount of blood involved, I’d say Elsa has struck again. In addition to all the amputation and disembowelment, either someone poisoned dinner or that puppy bite was infected.

So, why? If Emilia is the real target this time, someone’s trying to get her out of the running for the kingship. When they couldn’t just knock her out of the race by taking her token, they chose to simply have her killed instead. But we don’t really know who the assassin is after, just that Subaru keeps getting killed in the process.

Some great directorial bits along the way this week, particularly the scene of Subaru trying to study with Emilia in the room. He’s not the most sympathetic main character, but the show is doing a terrific job of making the viewer understand what’s going on in his head. 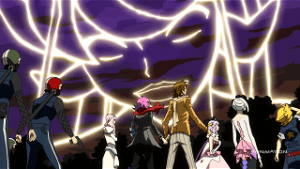 Concrete Revolutio #17 – Concrete Revolutio turns its sights on the depths of the earth this week. Devilo and Devila are sorta kinda Western-style demons, and Devilo’s chaperone is a giant catfish of the sort said in Japanese legend to cause earthquakes. (Zumanan’s name is even reminiscent of the Japanese word for catfish, namazu.)

Just as Master Ultima and other superhumans have made it to other planets before ordinary humans could even reach the moon, the spirit world turns out to have its own mohole complete with convenient elevator. While one of the big themes in this second half has been that humans and superhumans are really all the same, superhumanity is constantly presented as being part of realms that non-superhumans can’t reach.

Speaking of space, this is the second episode in three weeks to make a point of talking about it. First Aki and now the devils think of it as a refuge from persecution, which it might well be after the last flight to the moon. Perhaps the attack on Apollo 17 will be the reason for halting trips outside Earth orbit in this timeline. 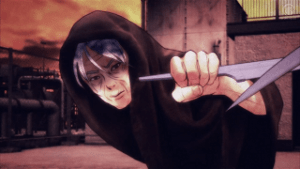 Kagewani -II- #5 – You would think that if there was one place left in this hectic modern world where a gal could stab someone to death without being rudely interrupted, it would be the roof of an abandoned pharmaceutical factory. But no. Everyone and everything has to jump in and give their opinions on the topic.

Meanwhile, Kimura learns that while he was off getting nailed back together, Sarugaku found a replacement who makes him look sane and sensible in comparison. I’m wondering how Dr. Homma’s name is spelled in kanji. We’ll find out eventually when he shows up and has to be mentioned in the credits, but for now I’m going to imagine that it’s 本魔, which would make him Dr. The Actual Villain.

The old woman is a familiar face from season 1, when she was last seen telling Bamba that she would hunt him down and kill him if the kagewani completely took him over. But there are apparently entire different groups of people trying to keep the kagewani and their associated monsters in check, with differing opinions about being lenient in this situation, and she loses the argument rather forcefully.

Well, damn. That’s an unhappy ending for one of the better people in this story. But it’s a reminder that this is a horror show, after all. 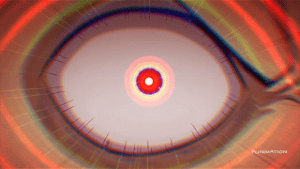 My Hero Academia #5 – U. A. Academy likes to give its teachers the freedom to teach in whatever style they feel is appropriate, which is a bit of a problem for Izuku when he’s assigned to the class taught by the Severus Snape of Japanese superheroes. I wonder what that makes All Might? Hagrid, maybe?

The basic shōnen plot is on display here: hero is confronted with seemingly unbeatable challenge, hero overcomes it through a combination of strength and ingenuity and levels up in the process, new seemingly unbeatable challenge appears. Thus, after just barely making it through the entrance exam, Izuku has to figure out fast how to use his new power without completely incapacitating himself.

In addition to throwing another obstacle in Izuku’s path, Aizawa’s pop quiz provides a handy opportunity to run through the roster of major secondary characters and their powers. Most are very limited, but their users are, as the test was designed to show, creative about their use. That should keep things interesting. 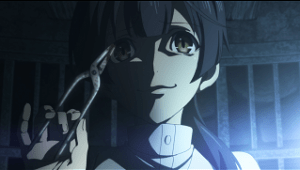 The Lost Village #5 – The monster in the forest is finally revealed, and it’s… well, no one can agree, can they? Everyone hears something different when it’s menacing them. Maimai saw it as Mitsumune, but Mitsumune thinks he sees someone else he knows. It’s like it’s just a big wad of supernaturally-charged anxiety that takes on whatever shape the person perceives it fears.

There is certainly a lot of fear going around. As everyone realizes they’re trapped, Paranoid Guy Whose Name I Forget gives the survivalists and Lovepon the Death Penalty Advocate the excuse they need to grab a victim to apply their skills to. He picks Mitsumune because Mitsumune just seems to be a little more interesting than anyone else at that moment, but it really doesn’t seem to matter to everyone who gets picked as long as someone does.

As an aside, we get even more of the bus driver’s unhappy history. He’s got plenty of reasons to resent people of an age that he probably looks back on as the happiest time of his life. The show is still trying to de-emphasize him, but now we know more about him than anyone else in it. I’m convinced at this point that this is all really about him.