A week and a half ago, I had the pleasure of hearing Connie Willis read from her forthcoming novel, a romantic comedy titled Crosstalk (due out in October), and it got me thinking about Uncharted Territory, another romantic comedy she wrote over twenty years ago. It also reminded me that Valentine’s Day is just around the corner and that I had better start thinking about what to get my wife.

Uncharted Territory is by no means Connie’s only romantic comedy, but I chose it because it blindsided me back in 1994. The sort of “You got romance in my comedy” thing where the guy with the chocolate didn’t want any peanut butter, but is forced to admit that he enjoyed the combination. At the time, it started me thinking about how comedy interacts with romance.

In addition to being a romantic comedy, Uncharted Territory is also a SF/Western that explores gender roles (it made the Tiptree long list), while also being an effective satire of political correctness.

Doctors Findriddy and Carson are government funded explorers on the planet Boohte. They have been on the planet for years, slowly chipping away at mapping the uncharted territory of the planet. Led by a native scout named Bult, their progress is painfully slow due to government regulations that prohibit the use of advanced technology, including vehicles. They get around on “ponies” which are actually native fauna that seem more like donkeys in their stubborn refusal to move when you want them to.

The story starts with the two explorers heading back to base and bickering over who lost the binoculars. Every step of the way, Bult levies fines against them for seemingly everything they do, “disturbance of land surface,” “inappropriate tone and manner in speaking to an indigenous person,” etc… It seems the government doesn’t want anybody accusing them of ruthless imperialist expansion, so they created a system of fines to protect the indigenes and the eco-system. The trouble is, the fines are paid to the indigenes and they know a good thing when they see it, so Bult fines Findriddy and Carson at every possible chance and then uses the money to buy technology that the explorers are forbidden to introduce into the native culture.

Carson is in a rush to get to the base in order to meet Evelyn, a socioexozoologist specializing in sex who is joining them for the next expedition. But he is disappointed when Ev turns out to be a man. Ev, however, is very excited to see Findriddy and Carson, the explorers made famous in the “pop-ups” (holographic TV shows) back on earth.

Together, the four (don’t forget Bult) set out to explore uncharted territory, face down renegade prospectors illegally on the planet, survive encounters with dangerous animals, and learn a thing or two about the mating habits of various creatures. 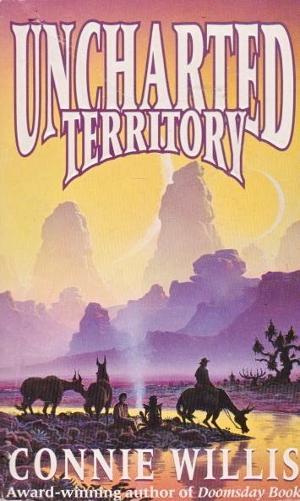 The entire story is told from Findriddy’s point of view, and that significantly limits what the reader knows, particularly in the first half of the book. This dearth of information is, to be honest, a bit frustrating during the early going as the reader wishes Findriddy would explain a few things. But these blind spots are not poor writing on Connie Willis’ part, they are intentionally ambiguous. The title of the book, Uncharted Territory, has multiple meanings. Not only are the secrets of the planet being slowly revealed to the explorers, but so are a variety of details that sometimes highlight our assumptions as readers.

One thing that is not intentionally hidden, is that this short novel is a romantic comedy. The only reason I didn’t know it the first time I read it, was because I was reading an advanced reader’s copy that did not come with the information normally found on a book cover. So I was reading along, enjoying the satire and the unfolding plot, when it occurred to me that the story had stopped being as funny. I started to care more about the characters on an emotional level. I wanted them to have a happy ending.

I have, in previous Scide Splitters, mentioned that sentiment is the enemy of comedy. The more sentimental a story gets, the more limited the range of comedy that can be employed. If sentiment is kept to a minimum, main characters can even be killed for a laugh without a feeling of emotional loss. Yes, I know, some of you are thinking that violates a golden rule of storytelling in that you must make your audience care about the characters. But comedy doesn’t always play by the rules. Don’t believe me? How many people shed a tear at the end of Life of Brian or Dark Star? If you did, it was because you were laughing so hard that you cried, not because you were upset that the central characters die.

Romance, on the other hand, requires sentimentality. If the romantic bond between a couple is to be convincing, then the reader must sense their compatibility at a deeply emotional level. Too much humor at the end of the story results in a blunting of the romantic effect and the story becomes a comedy with romance elements. So it is no coincidence that the comedy in romantic comedies is primarily concentrated at the front of the story, before the reader becomes heavily invested in the fate of the relationship between the characters.

The hard part in creating such a story is that the writer must possess both storytelling skill sets and know how to blend them. Connie Willis, as her Grand Master status implies, is a tremendously skilled storyteller. In Uncharted Territory, she effectively manipulates the reader, taking them from laughing at the start to having the warm fuzzies, and perhaps even tearing up, at the end. That is what romantic comedy is supposed to do.

40 years on, did Star Wars change SF for the better or worse?

Amazingly Enough: Lost And Found – The Town That Doesn’t Exist