The comic book series Astronauts in Trouble by Larry Young (writer), Charlie Adlard (art), and Comicraft is just what it sounds like and a whole lot more. Fresh from Image Comics, this new/old story gives readers an insightful glimpse into the world of space exploration and the dirty little secrets behind the people who made it happen. Though a work of fiction, the sardonic events do follow an arc that many members of fandom would prefer to have been true. 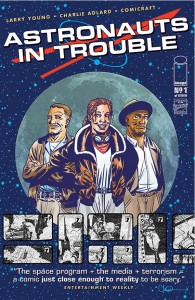 Not having had the pleasure of originally experiencing this series, it is exciting to have a second chance thanks to Image Comics.

Released June 17, 2015, this first installment begins with issue one titled Flight Plan where an unlikely news team brought together to help boost revenues for the fledgling channel 7. Their first case turns out being a crime scene where police officer mistakenly shoots a janitor. But the story quickly jumps from the US to Peru 10 days later where the news team is scheduled to cover a missile test launch. With the cold war tension mounting, paranoia and fear soon turns to dangerous reality as the space race begins. 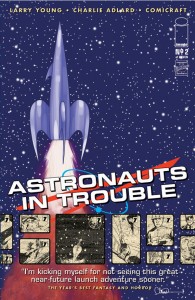 The second issue aptly titled U.S. and Them was just released on July 15, 2015 and follows the panic and confusion following a disastrous first launch attempt. As the news team from channel seven and the military try to piece together clues, the action is suddenly launched into space – to the Moon.

The next (third) issue is scheduled to be released by Image Comics on August 5, 2015.

The storyline of Astronauts in Trouble has the speed and feel of classic science fiction movies of the 50’s with a twist of a Mickey Spillane mystery. Larry Young has provided us with so much secrecy and hidden intentions, we know who the good guys and bad guys are supposed to be, but we’re not always sure which characters fill those positions. And that is how we like our action. Never knowing what is just around the corner (or high up in the void of space) will drive fans crazy with anticipation for the issues that follow.

As for the artwork, anyone who picks up an occasional comic will surely recognize the crisp detailed images that bring the characters to life. Charlie Adlard of The Walking Dead fame brings the same passion to this story as he has with the popular zombie works.

As a side note, seeing a bad guy pull out a bad-ass looking retro style blaster as he fled away did give this reviewer an unexpected gift of satisfaction. Sure we have the typical rockets and spies and political mayhem, but THIS is what many in fandom like in their “historical” science fiction. It is the image of the unthinkable “what-if” nestled in the middle of what we’ve already come to expect that makes the entire series worth the investment. Rockets and ray-guns, it just doesn’t get any better than that.

The journey of Astronauts in Trouble by Larry Young and Charlie Adlard is just beginning (again), but for those who have craved the excitement of space travel with a little bit of espionage mixed in, this is a wonderful place to start. For those looking for a glimpse into the past and the passion that was once the space race, this isn’t so bad either. Give it a look.