Andri Magnason spins a dark, humorous satire of a wildly absurd, near future that is not that far off from our current trajectory.

Whenever I read a book that’s been translated into English, I can’t help wondering what I am missing. This is especially true with humor because a significant portion of what makes a story funny comes from subtle word choices and timing that don’t necessarily survive the process. Case in point, Connie Willis told me earlier this year that the German release of The Best of Connie Willis: Award-Winning Stories will have one omission – her hilarious Hugo winning “The Soul Selects Her Own Society: Invasion and Repulsion…” The publisher felt that the humor didn’t translated well.

Originally published in Icelandic in 2002, LoveStar by Andri Snaer Magnason was translated into English in 2012 and subsequently received a 2013 Philip K. Dick Award special citation. And although the story is obviously humorous and I do think it is well worth reading, I can’t help but feel that some of the humor was lost. The satire comes through clear enough and the absurd elements are bizarre enough to remain so in any language, but there is a shortage of the subtle humor that usually marks such a novel. Maybe it was never there, or maybe it was lost in translation. Short of discussing this with someone who’s read it in its original Icelandic, I have no way of knowing.

The narrative takes a dual track, one follows the titular character, LoveStar, co-founder of LoveStar the corporation and the most influential man in history. The other revolves around a pair of star-crossed lovers, Indridi and Sigrid, whose unscientific love cause them to be “among the last victims of freedom.”

The passages about LoveStar all take place on an airplane where he nervously protects a seed that we are informed is of such importance, that if the seed were to be lost, all hope would be lost. We are also told right from the start that hope is lost anyway because LoveStar is doomed to die in less than four hours. Through LoveStar we get a series of flashbacks that provide the backstory that explains just how we arrived at this moment in this dystopian world for which he is largely responsible.

Indridi, we are told, was a hellion of a child, such that at five years old, the insurance company informs his parents that the cost of his continued coverage will be astronomical. They advise that the boy be “rewound,” which is a euphemistic way of suggesting that the parents start over by having an identical frozen embryo taken out of storage (with all that this implies for the five year old failed version).

Always concerned about the possibility of being rewound again, the second Indridi grows up well-mannered and is generally liked by everyone. As an adult, he meets Sigrid and they fall in love, and despite the warnings of nearly everyone, they foolishly think that they will be together forever.

Through Indridi, the reader becomes familiar with the horror that is his world, a world that he and his fellow inhabitants seem to consider a great improvement over the past. Everyone is constantly connected to the rest of the world through birdwaves. Privacy is a thing of the past with nearly everything about a person collected in the great central databanks of LoveStar. This information is exploited for targeted advertising, often delivered through “Howlers,” people who have leased out their speech centers to shout advertisements at strangers who happen to be in the right target group. Public opinion is deftly manipulated by moodmen using perfected marketing and media techniques. The dead and the elderly are launched into orbit in order to burn up on return as shooting stars, a process billed as environmentally friendly and promoted with its own theme park. And another department of the company called inLove calculates your perfect soul mate. 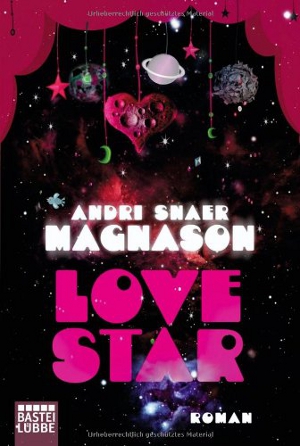 It is inLove that brings trouble to the young lovers when Sigrid is calculated as being the perfect match for a stranger she has never met from Denmark. Heartbroken that they were not calculated together, Indridi and Sigrid are determined to resist. But, “LoveStar and his experts were on a mission to free people from the oppression of freedom. If Indridi and Sigrid had been patient and waited for a scientific result … they would never have had to pay this emotional price.”

At times the mood of the novel almost seems bipolar. Passages featuring LoveStar and his backstory tend to be sad and heavily laden with biblical and Icelandic allegory. The Indridi and Sigird portions tend to be more patently absurd and elicit a fair number of laughs, except when occasionally their story borders on tragic. I realize there is a fine line between comedy and tragedy, and that is one area where the translation may falter.

Another aspect that confused me was the author’s inclusion of several historical references that imply that the entire novel takes place on a near future earth with a slightly altered history. But, other than the moon landing, most of these will go unnoticed and these doesn’t seem to be in any way vital to the story or the world building.

Regardless of my quibbles about translation, the story works very well as satire, even if it is not as consistently funny as I would have liked. Magnason deftly highlights aspects of human nature that, if left unchecked, could easily lead us to a horrific future made possible by our rapidly advancing technologies. I think that it is important to note that this novel was originally published over a dozen years ago, and rather than become dated, the book seems to have been somewhat prophetic (and therefor more horrific). Consider that it was written before Facebook existed and before Google started extending its tentacles into seemingly every aspect of society.

In the final analysis, I must admit that I very much enjoyed reading LoveStar and do not hesitate to recommend it to those readers who enjoy dark comedy. If, however, your tastes run to the more light-hearted side of humor, this is probably not a good fit. It also contains adult themes that may not be appropriate for the kiddies. The English translation of LoveStar is available in trade paperback from Seven Stories Press.

Affordable Flying Cars May Be a Reality in a Decade