It doesn’t always come easy for fans of multiple interests to combine those concentrations. As a sports fan, finding that competitive element, one that is a primary focus of the plot, within works of science fiction is a rarity. Sure, there are things like quidditch matches and pod races that show gamesmanship, but these are merely stage segments within a grander plot. But having sports as the theme of a story is less common. 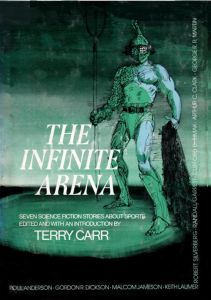 The Infinite Arena is an anthology edited by Terry Carr and published in 1977 by Thomas Nelson Publishing. Specifically marketed as a collection of sports stories, the list of contributing writers is almost as impressive as the stories themselves. Names like Poul Anderson, Robert Silverberg and George R.R. Martin to name a few. But on a recent weekend vacation at a motorsports event, I thought it would be appropriate to focus on the short story Sunjammer by Arthur C. Clarke, which follows a race consisting of space vehicles powered by the Sun.

John Merton is an aged veteran in the design industry and considers the latest race between the Earth and the Moon as his last chance to prove his design talents. And as one competitor after another bows out of the race, either by design flaw or poor navigational judgement, John sees his chances of success improving over the younger and more daring competition. But the Sun is an unpredictable beast who doesn’t care about winning or losing. So, when an unexpected solar flare erupts and puts the competitors in peril, those hopes of John finally being crowned number one come to a disastrous end. He does assure that his vehicle will continue on its course as he escapes in his space suit with hopes of still gaining some sort of recognition, but the victory is bittersweet knowing he will be too old to compete again.

The science of Sunjammer is sound for the time period it was written. This story was first published in the March 1964 Vol 54, No 3 issue of Boy’s Life, but it should also be pointed out that a publication known as Amazing Stories also ran the tale in the February 1966 Vol 40, No 4 issue. The fresh idea of powering a spaceship on solar winds was probably considered heavy fantasy for the time. But by explaining the various techniques that top scientists had imagined and displaying them in a competitive setting, readers were allowed to witness a future we still dream of today.

Written in Clarke’s vivid, almost poetic color, it was easy to forget this was not real. “The play of sunlight on the great flexible mirror was beautiful to watch. It was undulating in slow, stately oscillations, sending multiple images of the Sun marching across the heavens, until they faded away at the edges of the sail.”

Sunjammer by Arthur C. Clarke is just one of seven stories editor Terry Carr selected for The Infinite Arena anthology, a cohesive mixture of sports and classic science fiction many fans will enjoy. Perhaps we’ll check out the others in future posts.