In my next poetry review I bring you the new collection of Poetry Grandmaster Bruce Boston – Resonance Dark and Light, chock full of genre poetry goodness! 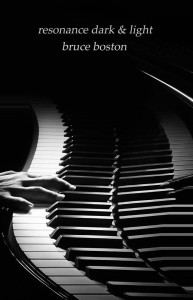 Bruce Boston is a Grandmaster of SF poetry as awarded by the SFPA. He has about 50 collections and chapbooks to his name, hundreds (if not thousands) of poem published in print and online. He also writes fiction. His work ranges from pure Science Fiction and dark poetry to surrealism and horror. I conducted an interview (in two parts) with him in 2013 here on Amazing Stories Mag, which includes more poetry to listen to and a look at 3 of the collections preceding the one in review here. Boston does surely give us the opportunity for poetry reviews galore!

Resonance Dark & Light came out just a short time ago from Eldritch Press. Boston is an incredibly prolific and successful poet and of the 52 poems collected here only 4 are appearing for the first time. 2 are award winners. Also, many of the magazines and journals where these have appeared are only available in print, so unless you can afford to subscribe to the 8 or 10 magazines you won’t have read most of these already.

As usual, we can expect entertaining poetry with plenty to keep our intellect at work and we are not disappointed! For several years, Boston has been working on a series of poems titled “The Music of …” (you can fill in the blank). There are no fewer than 12 of these poems, which as a musician, I especially appreciate. The poet ruminates on what the music of Werewolves, the Devil, Vampires, the Reaper, a dead world, skeletons, robots, particle physics, cold fusion, shapeshifters, the Mutant Rain Forest, deep spacers and of the stars would sound and be like. These poems are extremely evocative and in the cases of trope-heavy subjects (like werewolves) are successful in avoiding triteness. He does this by calling to mind everything we know, and some things we don’t, about that particular subject and giving the images sounds to hear in our mind’s ear. A delight for any SFF fan worth their salt. Listen to “The Music of the Stars,” which won the 2013 Balticon Poetry Award:

Other themes include Time (another favorite subject), various horror themes, several “Curse of…” poems, surreal poems and even a couple of Mutant Rain Forest poems, which are part of an ongoing series of linked poems and stories by Boston and some by Robert Frazier, which I highly recommend for their entertainment value. There are also a couple of ekphrastic poems, which take inspiration from paintings.

“Fate of the Time Meddlers”

The poems in this collection are a great representation of Boston’s consistent excellence. There is familiarity in the repeated variations and yet there’s enough variety to keep your interest level high. The arrangement of poems is also masterful, giving the reader the feeling of riding the waves of Boston’s imagination. The cover and several full page illustrations were done by Boston himself, which bring a lot to the poems they illuminate. In fact, I just love this cover. It’s so understated, but it evokes the contents so perfectly and is beautiful to boot. This collection comes highly recommended.

If you want to take a serious look at writing, James starts from the beginning….

For all its faults, IT is horror’s Moby Dick – a gargantuan tale so full of powerfully rendered characters, ideas and episodes that it bears returning to and analysing, one memorable passage at a time.