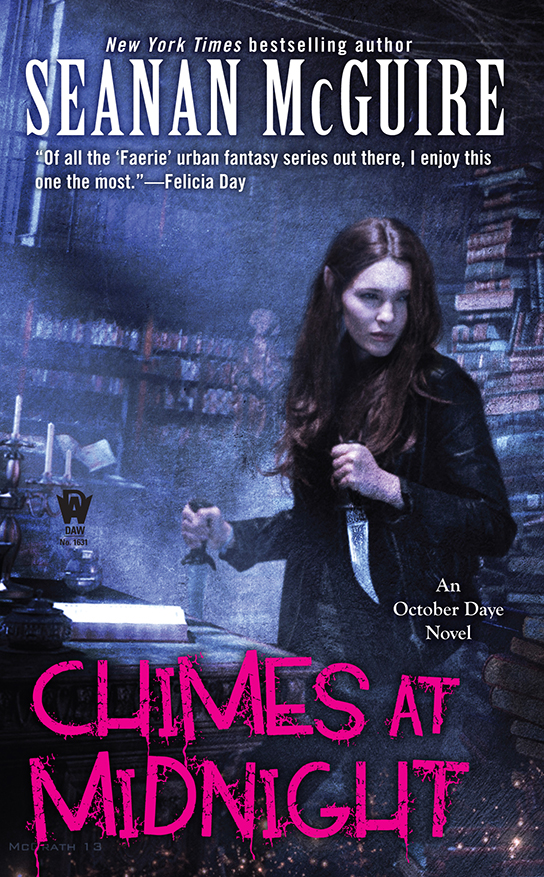 Urban fantasy novels are big right now and it’s hard not to love Toby Daye, the unlikely knight and changeling protagonist of Seanan McGuire’s popular series set in magic-rich San Francisco. Chimes at Midnight is book seven in the on-going series and, now we’ve met the characters and had hints dropped about the history of the Kingdom in the Mists, the story is getting fascinating.

In the most recent books, Toby has found things and people who had been lost, she has been elevated to Countess and chose to return to being plain old Toby Daye, Knight of Lost Words. She has lost her true loves, reconnected with a world that she didn’t know cared about her and is now tackling the rising problem of goblin fruit.

Easily an allegory for the mortal drug trade, goblin fruit is much more nasty than anything humans could come up with. The fruit, made into jam and pies, is the fae equivalent of chocolate, consumed to give them good dreams and dull the boredom of immortality, but when changelings get their hands on it, it has much more deadly consequences. Toby discovers bodies and summons the mysterious night haunts, only to realise the Kingdom of the Mists has a serious problem. Taking the issue to the Queen only exacerbates the problem and Toby finds herself with three days to set her affairs in order and leave the kingdom, or at least be confined to the duchy of Shadowed Hills.

Instead, our favourite changeling finds herself trying to unseat the Queen of the Mists by discovering who killed her ‘father,’ Gilead, and locating the true heir to the throne. What should be a relatively easy task is complicated by an incident with a pie which sounds hilarious and could only happen in such a beautifully poetic world.

As is my preference, I went for the audiobook version of the book narrated by Mary Robinette Kowal who has been voicing Toby since the first book, Rosemary and Rue. There are no downsides to this, she’s an amazing narrator who gives unique voices to everyone from Toby to the terrifying but loveable Luidaeg and this particular volume does much to explain events touched upon in earlier volumes. We also get to see more of San Francisco, with the Borderlands bookshop also taking a starring role.

The ending, though satisfying, leaves you with an irritating sense of ‘come on, really?’ even as you start counting down the days to the next volume. The best part about the Toby Daye books is that while altercations sometimes take a while, they’re well worth it. The paperback volume of the book, as an additional bonus, also includes an exclusive short story which stars the Luidaeg. I wish it had made it into the audio version but the story alone is well worth picking up the paperback, if audio isn’t you thing.

Was Same Sex Behavior Hardwired Into Animals Since the Beginning?