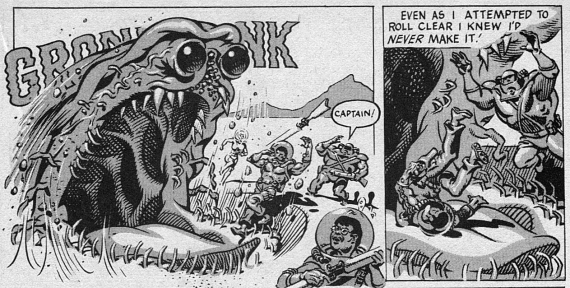 Is the above art by Wally Wood? Looks to be his style. I love his style. That’s why last week’s column was devoted to Wally Wood, the ultimate SF illustrator of all time (at least in MY universe).

But no, the above art is by Rand Holmes, the Penultimate SF illustrator of all time, second only to the great one himself in my humble opinion.

Any yet… and yet… that’s not what Holmes was known for. In his day he was considered one of the great underground comic artists, not quite in the same league as Crumb mind you, but well thought of. He was certainly one of the most sexually explicit underground artists at times, leaving nothing to the imagination, but this was but one aspect of a wide-ranging talent. For a different aspect, consider the two panels below.

These are two of Holme’s most popular characters, Harold Hedd and his “Cuzzin” Elmo. They were Canada’s answer to the “Fabulous Furry Freak Brothers.” But I’m getting ahead of events here. To start with my initial introduction to his art, let me go back in time…

Randolph Holton Holmes was born in 1942. Oops! Too far back…

Vancouver 1968. Hippie era still in full swing. Underground comics surging strong. An unemployed sign painter (spent ten years at it – “That’s how I learned brushwork and lettering”) shows up in town. Holmes had already tried the standard life style, steady job, been married three times, but he hadn’t been happy. Two things convinced him to move from Edmonton to Vancouver. He came across Zap Comics #2 and was blown away by the blatant pornographic imagery of S. Clay The Checkered Demon Wilson’s art. Refreshingly different from the “Klondike Days” ads he’d been doing. And he kept coming across issues of The Georgia Straight, Vancouver’s freewheeling (and free) underground weekly newspaper. Obviously Vancouver was the “happening” place to be. And so he bolted from Edmonton.

One day in 1969 he walked into the office of the Georgia Straight and handed in a panel lampooning Mayor “Tom Terrific”. The paper printed it. Holmes went back and asked for some sort of payment. A guy dug into his pocket, fished out a ten dollar bill, and gave it to him. And that was the beginning of his career with the Georgia Straight.

I Remember Mayor “Tom Terrific.” He hated hippies. They hated him. It was a solid relationship. The Mayor also hated the Georgia Straight. So people like me loved the Georgia Straight, just to spite the Mayor. But also everybody (or everybody I knew, weekend hippies all) loved the Straight for the art Holmes contributed. Sometimes covers, sometimes illustrations for ads, and frequently panels for his Harold Hedd comic strip.

According to Ken Lester, a Straight staffer at the time: “Without a doubt Rand’s contribution was the first thing readers would turn to each week when the Straight hit the stands… We just left a hole in the paper each issue and prayed his artwork, whatever it might be, would show up before the issue got to the printers. We were always nervous but never disappointed.”

Eventually Holmes tired of Harold, saying “An era had come to an end. Harold Hedd was part of that era and I had nothing left to say about it.”

Fortunately Holmes had already begun to branch off into other markets before he finished with Hedd. I have no idea what he put into Gay Comix, Dope Comix, or All Canadian Beaver Comix, never having seen them. Probably not much science fiction.

The cover of Slow Death however, depicted Wally Wood style aliens in the cockpit of a spaceship being torn to pieces by bullets from American jet fighter planes. However I never saw it till recently. 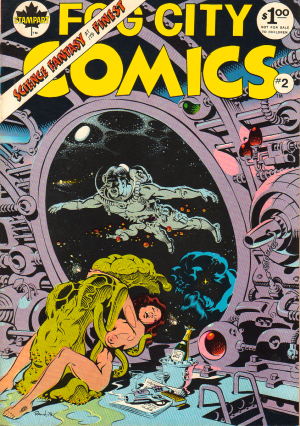 In fact where I first came across Holmes’ “science fiction” art was when I saw the cover art for Fog City Comics #2 (which should be on the left side of this paragraph unless editor Steve Davidson decides the cover is too risqué for Amazing) when it was published in 1978. Apart from the alien making love to a woman, the cover is classic Wally Wood. The Alien is a Wally Wood Alien. The spacecraft machinery is done in Wood’s style. Even the attention to detail, with the smoking raygun on the deck which the alien had used to finish off the spaceman now floating dead outside the ship, and the opened bottle of champagne, are typical Wally Wood touches. Soon as I saw it, knew I had to have it.

The “Gronk” monster clam panel at the top of this article comes from the “Killer Planet” story written and drawn by Holmes for the same issue. It is full of subtle homages to Wood’s style. The back cover, in full colour, depicts two Woodish aliens landing a spacecraft on Earth. The Line “Kid,,, when ya got SPA-FON ya got SPA-FON!” is a dead giveaway Holmes had read the old EC Weird Science and Weird Fantasy comics in which Wood’s art appeared, the line being a mystifying but common catchphrase employed by aliens in those old comics.

Fog City Comics #3 had another great cover by Holmes depicting flying ships reminiscent of Verne’s Robur The Conqueror machine having at each other with 19th century cannon. Details include a quite jolly Victorian era piston engine and a female ships officer wearing a classic 1930s brass bra. All done very much in the style of Wally Wood. Again, had to have it the moment I set eyes on it. 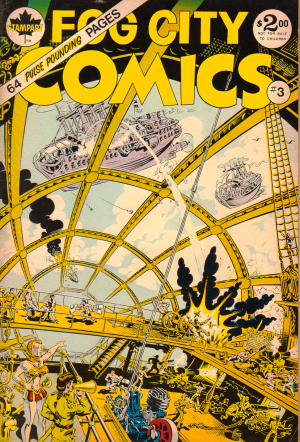 Holmes story inside, titled “And Here He Is, The Artist Himself” (the first panel of which is reproduced at the bottom of this article) is again both written and drawn by him. In fact, I suspect he may have written and drawn almost everything he published. As an artist he was very much a one man team and didn’t even like, as his Georgia Straight experience indicates, being told what to create. He fled to Vancouver to find total and complete freedom, and I think he rarely settled for anything less for the remainder of his life.

Anyway, the story in question is a kind of nightmare within a nightmare wherein Holmes is being harassed by Canadian secret police for publishing obscene materials, and various unlikely and improbable acts of violence come to his rescue. Done, not in the style of Wood, but very much in the style of one of the artists who drew for the EC Horror line of comics. Which artist I’m not sure, but probably Jack Davis.

I do know that in an interview Holmes credited seeing Mad comics when he was fifteen as what inspired his desire to have a career as a cartoonist. And as I pointed out in my last column, some of Wally Wood’s best work ( Superduperman, Flesh Garden ) appeared in those comics, which evidently fired Holmes enthusiasm.

As evidence I offer the fact that in the same interview he stated: “There was no formal education for artists in Alberta where I was at the time. What there was were some copies of The Haunt of Fear and Tales From The Crypt, EC comics. What I did was painstakingly copy the work of Wally Wood and Jack Davis and try to find out what they were doing.”

I also note that in a brief bio blurb in Fog City Comics #2 Holmes said that his major influences were Wood, and Eisner. I think I’ve hammered the point home. Here is a splendid example of Holmes offering homage to Wood. 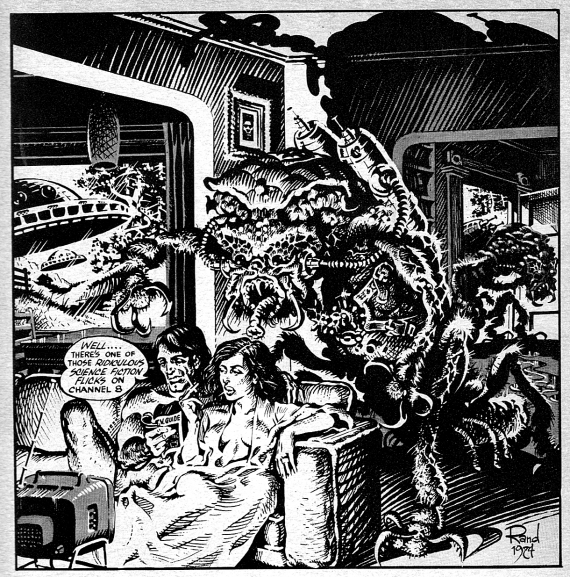 It is interesting to note Holmes graphic art became quite popular in Germany in the early 80 when Volksverlag Publishing put out a run of five comics reprinting in translation virtually all of his work to date, including “Rand Holmes gesammelte Werke HITLERS KOKAIN.” Another of the comics was titled, in English, Star Whores, an obvious reference etc. 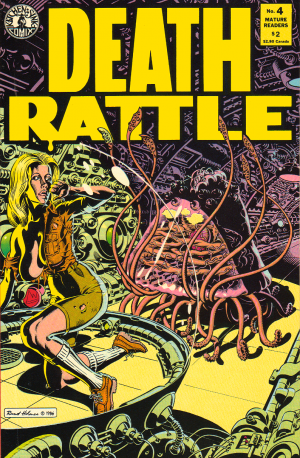 I next came across Holmes’ work in a comic series titled Death Rattle, 18 issues of which came out between 1985 and 1988. Issue #4 (reproduced left) was first to catch my eye, heck, tear both eyes right out of my sockets and mash them against the cover art. Again, classic Wally Wood, the machinery alone establishing that with absolute certainty. I have a feeling Holmes took particular pride and satisfaction from rendering spaceship interiors in the manner of Wood. A point of honour with him to capture it just right I suspect.

Now I find, in reviewing my copy of Death Rattle #4 that the story illustrated by Holmes was written by someone else, namely Mike Baron, as were several others later in the series. I assume Holmes was comfortable with this. Overall though, he was very much the type of man who shared life with loved ones and friends, but preferred to avoid the company of strangers if at all possible.

To illustrate this, back in the day when phones were permanently connected to the wall with wires you couldn’t disconnect, he kept his phone in the fridge. That way he never heard it ring, never had to answer it. He only used it to call out. Didn’t want anyone calling in. That’s how private he was.

The above panel is from the Holmes illustrated story in Death Rattle #4, titled “The Power of Prayer.” Two backpackers come across an alien spacecraft in the woods, and its pious occupant. Note the man is in the clutches of the creature. Note the woman is fully clothed, yet seems somehow naked. This is one of Wally Wood’s trademark techniques, designed to accent sexuality yet avoid censure. Not that that mattered for this underground comic of course, but it is part of the Wood tradition. (Although I have to admit that in his “underground” comics Wood often depicted nude women, but in a graceful and not-at-all explicit manner. Total opposite to S. Clay Wilson.)

The panel below is from Junkyard Dog in Death Rattle #5. To me it exhibits traces of Wood and EC Horror comics. Certainly a very nasty situation.

And going way back to his 1974 story Raw Meat in Slow Death Funnies #5, an especially nasty, not to say nightmarish, incident which is also very much inspired by Wally Wood to my mind. 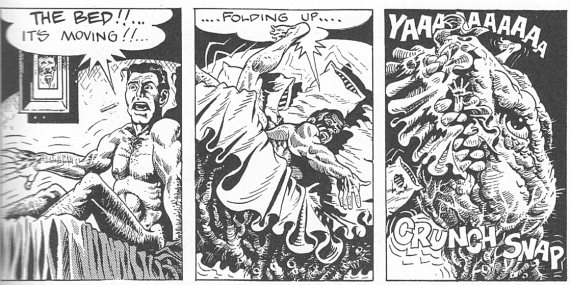 In his later years Holmes occasionally contributed to other comics and assorted one-off projects, but tended to spend most of his studio time working on watercolours and paintings which sometimes approached the surreal and were of a very high quality indeed. He was more than a cartoonist, more than an illustrator, he was an artist in every sense of the word. I know this because I saw some of his work on display at a Vancouver showing a couple of years ago.

Alas, Rand Holmes passed away in 2002. At the retrospective showing I was able to converse with his widow Martha. When I inquired, she confirmed that Wally Wood was THE major influence on her husband, and that he had always delighted in drawing in the style, thus confirming what I had suspected all along.

At the showing I also picked up RAND HOLMES, THE ARTIST HIMSELF, A RETROSPECTIVE by Patrick Rosenkranz, published by Fantagraphics. I highly recommend this book. It reproduces much of his most famous work, plus representative samples of all the different styles and mediums he worked in, and tells the story of his life in great detail. One of the finest single-artist studies I have ever read.

I conclude with a Holmes self-portrait: 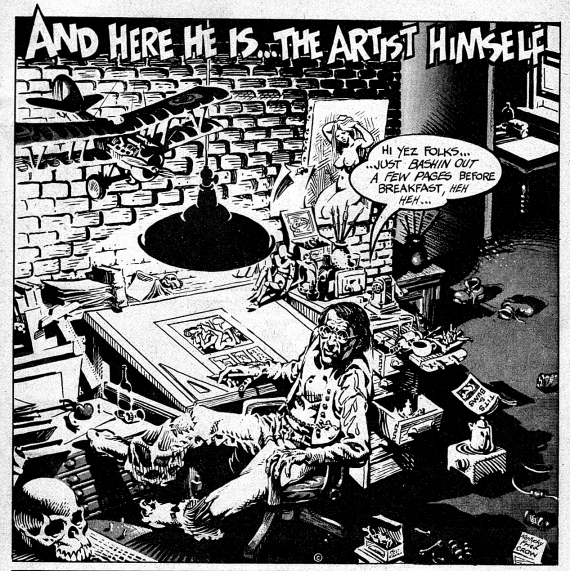