Home News For the Love of Reading…

Most people here at Amazing Stories have an insatiable love for reading. For many of us, this starts in childhood. For myself, it was my brother that introduced me to The Lord of the Rings by waking me in the middle of the night because he was so enthusiastic about what he had just read. For those much younger than I, they were first introduced to reading through television…specifically Levar Burton and Reading Rainbow.  When the show left the air in 2006 I mourned its loss. Anything that can inspire the love of reading in children is a worthy endeavor and I was sorry that PBS didn’t see the value in continuing it.

Well now Reading Rainbow is back, in a very big way.  It started with a tablet app that was released in June 2012.  A very good thing, but as most children don’t have access to ipads, it was limiting.  Even so, it became the #1 most-downloaded educational app in the iTunes App Store within 36 hours of release. Levar, and the people behind Reading Rainbow wanted to make it available to children everywhere…enter Kickstarter.

If you read my prior post on Hybrid Authorship you’ll know I’m a big supporter of this platform and have used it with great success myself for Hollow World.  I think the combination of Reading Rainbow and Kickstarter was a fabulous idea. Apparently some others did as well, since it reached its goal of raising $1,000,000 in the first eleven hours!  They now have set a new goal, $5,000,000 and if they reach it then they can increase the number of schools who will have access for free by 500%. 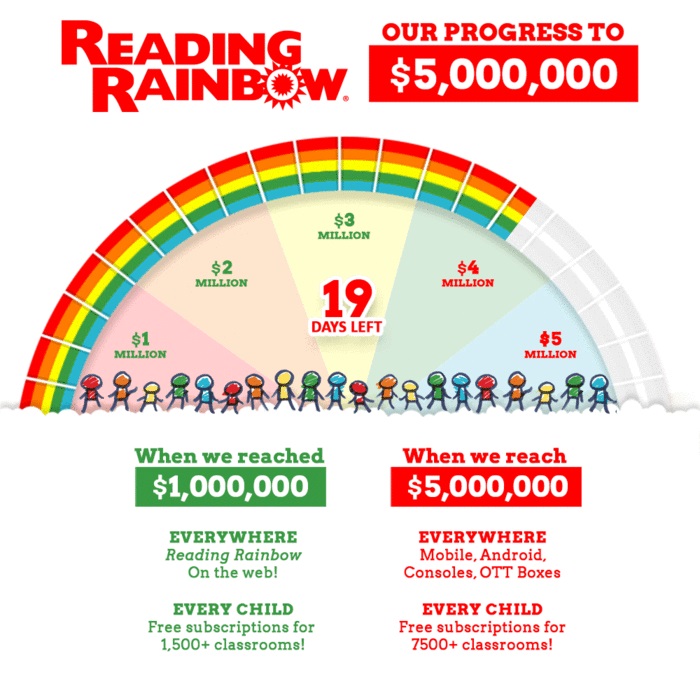 At the time of writing this post, they are well on their way (over $3.7 million raised). I was one of the contributors that got in on day one, but there is still time for those that are just discovering this now.  They are offering a lot of cool exclusive swag such as T-shirts, coffee mugs, and in the tradition of PBS, tote bags. Not to mention a chance to spend some time with some of Levar’s friends…in other words Stars from Star Trek and The Next Generation.

If all that wasn’t enough to motivate you to join in the Kickstarter. Here are some sobering facts:

So if you have a love for reading, and want to inspire the same in children everywhere, please consider becoming a backer. Reward levels start at just $5 and there are a wide range of levels to fit virtually any budget. Full details about the Kickstarter can be found here.