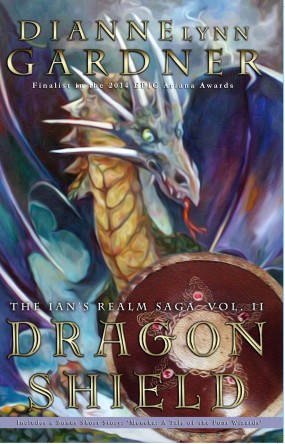 PDMI Publishing, LLC is pleased to announce the release of Dragon Shield, the second book in the Ian’s Realm Saga written and illustrated by Dianne Lynn Gardner. The Saga is gaining international recognition with fans in Europe, Australia and North America. The Dragon Shield trailer was a semi-finalist in the Moon Dance Film Festival and the cover of a previous release of Dragon Shield was a finalist for the Epic Ariana Award.

PDMI has committed itself to bringing the entire series to life. Each book has been re-edited and the artwork re-mastered to bring out Dianne’s talent and really let it shine. Rubies and Robbers and Diary of a Conjurer are scheduled to be released before fall and Cassandra’s Castle is being planned for Christmas. An audible version of Deception Peak, the first in the series, was released earlier this year. There is also a companion CD with the Songs of the North Wind written by Gardner and set to music by Lexa Rose. Last but certainly not least, PDMI will be releasing a teacher’s guide for the first three books of the Saga this summer. The guide was developed with educational standards in mind and will be formatted for efficient classroom usage.

Ian’s Realm is a story that deserves this attention. It is a well written and thoughtful coming-of-age story that involves choices, consequences, love and loyalty. Each story in the Realm deals with life’s lessons and the things we must learn to reach adulthood with a sense of what is important and what we are willing to stand for; whatever the cost. From Dragon Shield: “Integrity isn’t something you do, it’s who you are.”

Come join us on a journey to the Realm where Dragons reign…at least until we learn how to conquer them.

The books of Ian’s Realm are published by Rara Avis, an imprint of PDMI Publishing, LLC.

Lexa has composed and performed songs whose lyrics come from the poems in Dianne Lynn Gardner’s trilogy the Ian’s Realm Saga. In the story the songs are sung by the Northwind and are both prophetic melodies and laments. Lexa lends her beautiful voice in a Celtic sound and can be found in Deception Peak’s audio book narrated by Matt Josdal, and on an album soon to be released by PDMI Publishing, LLC. Her song is also featured in The Dragon Shield book trailer which came in as a semi Finalist at the Moondance Film festival.

Please enjoy the music and check out the books.