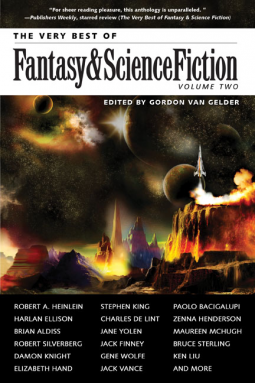 UPDATE: 5:00 pm est.  We are informed that there has been a change to the final contents of this anthology and include the full table of contents below.  Additionally, the change has affected the promotional copy and we therefore substitute more accurate promotional copy in the interest of accuracy.)

THE VERY BEST OF FANTASY AND SCIENCE FICTION, Volume 2.

…continues to showcase some of the most famous authors writing in any genre. Now drawing upon F&SF’s impressive history of classic and contemporary tales, this extraordinary companion anthology revisits and expands upon sixty-five years’ worth of top-notch fiction. These broad-ranging, award-winning tales appeal to readers of genre fiction and beyond, exploring alternate history, time travel, urban fantasy, cyberpunk, modern myth, horror, interstellar travel, epic fantasy, mystery, space opera, and much more.

Content teasers include:-Extreme fishermen pursue monsters of the deep in the oceans of Venus.-Lucky Cats propagate an economic revolution initiated by artificial intelligences.-The Internet invades a third world village.Additional information on this July release is available at Tachyon Publications.

Judging by the names on the cover and the teasers included, it is obvious that this volume traces the history of the genre through the stories that have appeared in F&SF since 1950. From its very first issue in 1949 (as The Magazine Of Fantasy – the name would change with the very next issue) F&SF demonstrated mastery of the art of straddling the divide between fantasy and science fiction and of establishing high marks for excellence and experimentation. The Harlan Ellison® Hugo Award Winning Jefty Is Five is worth the price of admission alone. And I ought to know, I voted for it to win that Hugo!