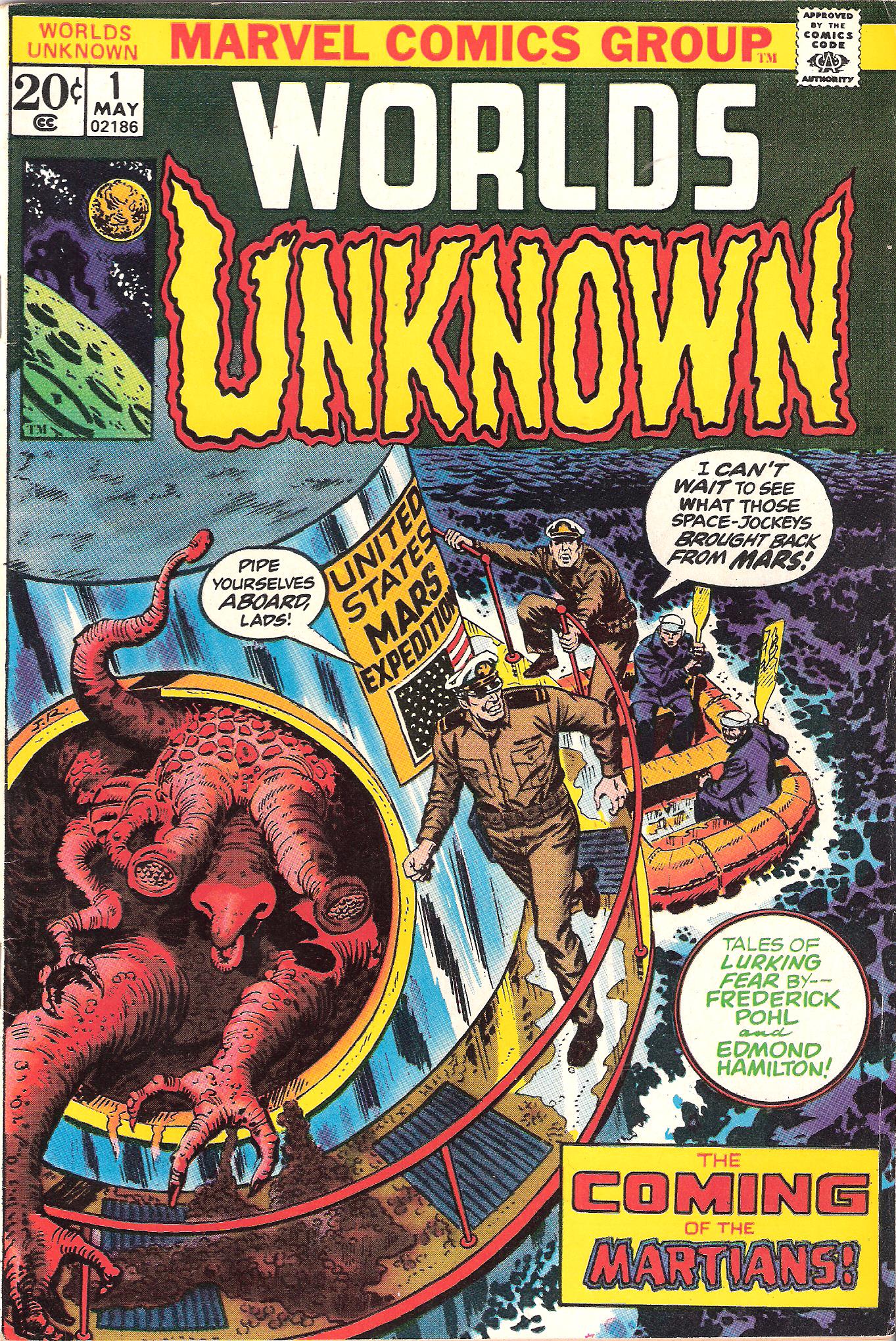 About a month ago, when we were talking about comic book stories based on Michael Moorcock’s works, I mentioned Unknown Worlds of Science Fiction, a short-lived black-and-white magazine from Marvel Comics. That was actually Marvel’s second attempt to publish a comic featuring adaptations of prose SF. The first was called Worlds Unknown.

Worlds Unknown was a color comic that ran for eight issues in 1973 and 1974. It was a good comic, produced by first-rate talent like Gerry Conway, Roy Thomas, Gil Kane and John Buscema. However, Marvel seemed to have problems marketing it.

The first issue featured an adaptation of “The Day After the Day the Martians Came” by Frederik Pohl. Without giving away too much of the story, the original was a cerebral, low-key mediation about the nature of racial prejudice. The actual adaptation—with a script by Conway and art by Ralph Reese—does a nice job at capturing that mood. The cover?  Well, not so much.

A space capsule labeled UNITED STATES MARS EXPEDITION is floating in the ocean. A small group of human sailors is climbing onto the walkway surrounding the base of the ship. The leader of the group is saying, “Pipe yourself aboard, lads! I can’t wait to see what those space-jockeys brought back from Mars!” Naturally, none of them can see the monster that’s crawling out of the hatch just ahead of them.

(I don’t know the complete publication history of “The Day After the Day the Martians Came,” but it first appeared in the classic anthology Dangerous Visions, which was recently reprinted and is now available in some stores.)

An equally bizarre scene graced the cover of Worlds Unknown #6. This issue featured an adaptation of a Theodore Sturgeon story called “Killdozer.” In this story, a bulldozer is possessed—and brought to life—by something that bears a strong resemblance to  the modern concept of nanomachines. The bulldozer in the story retained its original shape, but the one on the cover wasn’t that lucky. That one now has eyes, teeth (cut into the bottom of its plow) and enough of a voice to threaten, “You dared defy me—and so you must die!” 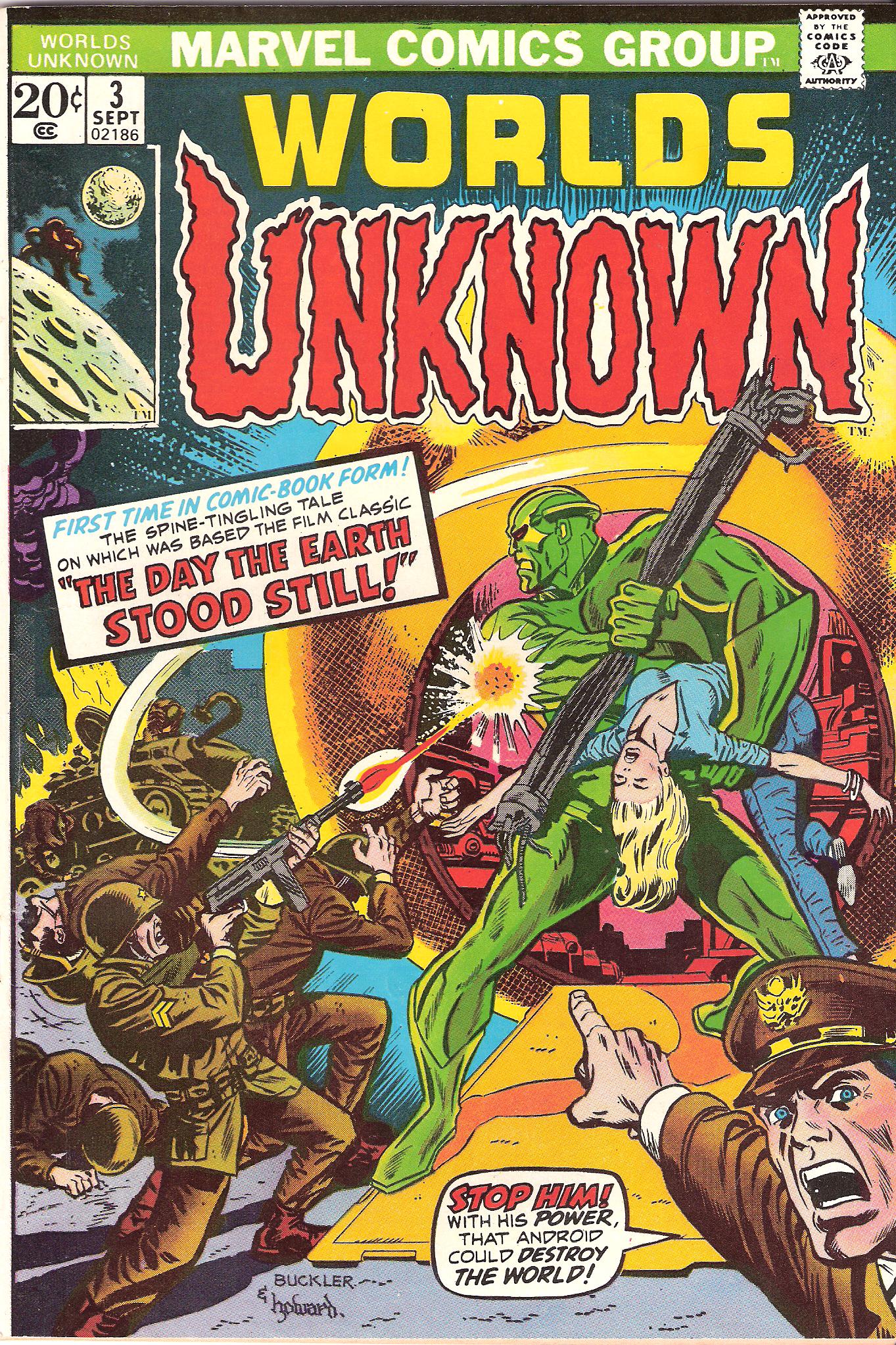 Other covers tried to promote stories by making connections with other, more famous stories. Sometimes these connections were legitimate—or at least arguable—but this approach still produced some oddities. Worlds Unknown #3 featured an adaption of “Farewell To the Master” by Harry Bates, a story that formed the basis of the original movie version of The Day the Earth Stood Still. The cover copy for that issue read “First time in comic-book form! The spine-tingling tale on which was based the film classic The Day the Earth Stood Still!.” Neither the title nor the author of the original are mentioned. And since this not really an adaptation of DESS, Gnut, the android on the cover, only bears a faint resemblance to his more famous cousin, Gort. But the reader is definitely being asked to make the connection.

At the other end of the spectrum, Worlds Unknown #4 offered an adaptation of “Arena” by Fredric Brown. “Arena” was also adapted into an episode of the original Star Trek TV  show, but that was never metioned in the comic. However, the adaptation of “Black Destroyer” by A.E. Van Vogt in issue #5 was promoted as being “in the tradition of TV’s Star Trek!”

Let me make one thing as clear as I can: it’s easy to make fun of the covers of Worlds Unknown now, but I do think that the folks at Marvel were doing their best to sell a difficult to market book. Given the time when it was published, before the comic shop system had really blossomed, it might not have even been possible to find the audience for this book. Looking at the stories now, though, I wonder if Marvel has the right to reprint them. It would make a great paperback for the book stores.