Why has this man been labelled “a poo-flinging chimp,” among other, less printable things? I have an idea or two (a rare occurrence, I know, I know).

Another day, another micro-controversy in the sff blogosphere! This time, SFWA has expelled a character known as Vox Day, also known as Theodore Beale, from its ranks, allegedly because he used an SFWA Twitter feed to link to a blog post of his own which violated SFWA’s content guidelines.

Where’s the controversy? you might ask, and so did I. Digging down a bit further, it quickly became clear that a lot of people had been pushing for Beale’s expulsion for ages on account of his views, which are so right-wing he makes Zero Hedge look like The Atlantic. So it seems as if SFWA simply caved in to the pressure, in its creaky old way, and found a convenient excuse to tell him to get on his bike.

Few tears shed on either side, I should think. This is an organization and an individual who were not made for one another. The “controversy” mostly consists in right-thinking people vehemently agreeing with one another that Beale is vile.

But their language is a lot more colorful than that. Below are links to examples plucked off the top of a Google search. Note that the bloggers named below are not necessarily the people indulging in, errr, colorful language. You have to scroll down to the comments in some cases. (I’m not reproducing them here because this blog is supposed to be family-friendly.) 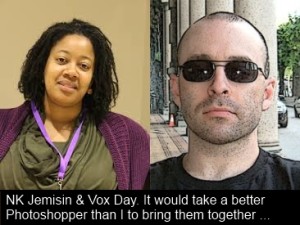 If you didn’t click on any of those links, let me sum it up: the anti-Beale crowd’s invective is broadly scatological, studded with obscenities and variants of “f**k.” More specifically, there’s a coprophilic theme running through this whole mass of commentary. Beale is characterised as a simian playing with his own excrement / hurling it at others. Not just once, not just twice, but over and over. What on earth is going on here?

To be honest, this isn’t the first time I’ve been struck by the right-thinking crowd’s proclivity for metaphors involving posteriors. (Cripes … I feel a bit silly reaching for these euphemisms, but how else do you write about this stuff without committing it yourself?)  I remember that I first noticed metaphors of this type being used apropos of some previous racism / misogyny-related controversy a couple of years ago, when I was still in permanent lurk-mode on the internet. Here’s an example that’s just about safe to reproduce:

“You are showing your ass in public. I cannot overstate the aptness of this metaphor. This kind of behavior is exactly the same thing as running out in the town square, dropping your pants, and slapping your pustule-laden ass while babbling about the end times.”

It was those pustules that stayed with me, so to speak. Catherynne Valente really does have a way with words. I don’t know whether she originated this metaphor, or whether she picked it up from somewhere else, but it has been widely reused since. And as best we can tell, the “ass” references logically begat fecal references, and at this point repetition has drained the trope of its expressive power

Well, ain’t that cool! But I am a writer not a linguist, and it isn’t the etymology of internet catchphrases that interests me. It’s who uses what language in which circumstances. And it is fascinating to note, in the context of the current kerfluffle, that it’s the anti-Beale crowd slinging obscenities and fecal metaphors, while Beale and his defenders are keeping it civilized. Beale doesn’t have many defenders. I could only find about three blog posts supporting him. But there’s nary a “f**k” (or conjugations thereof) in the comments to those posts, or on his own blog. The worst insults the pro-Beale bloggers use appear to be “rabbit” and “critter.” Oh, and they’ve come up with assorted semi-funny alternative meanings for SFWA, such as “Socialist Fat Women’s Association.”

What gives? The anti-Beale crowd is comprised mostly of professional fiction writers and their fans. I assume they are capable of civilized invective. But they choose instead to rely on endless metaphors involving shit and conjugations of the f-word. I find this incredibly weird.

So I clicked on this link. It’s fantasy author N.K. Jemisin’s reaction to Beale’s expulsion from SFWA. Jemisin seems to have inadvertently started the whole thing by calling Beale “a self-described misogynist, racist, anti-Semite, and a few other flavors of asshole.” (This was prefaced with a warning about profanity. Point to Jemisin!) Here’s the interesting bit: She declares that “You don’t negotiate with a certain kind of terrorist unless you want to encourage more of the same, and you don’t pay the compliment of reasoned, adult discourse to a certain kind of bigot for the same reason.”

So maybe this is why the anti-Bealeites use such foul language! It’s part of a deliberate strategy of refusing to engage in reasoned, adult discourse.

On the one hand, this is diabolically brilliant. By strewing the field of debate, as it were, with excrement, you can pretty effectively chase off anyone who wants to keep it civilized. I admire this tactic from a (metaphorical!) total-warfare perspective. But on the other hand … I didn’t think that reasoned, adult discourse was a “compliment” one pays to someone else. I thought it was a standard one set for oneself, and strove, for one’s own sake, to aspire to.

I don’t hold a brief for either side in this regrettable business. A plague of smeerps on both their houses! But the divergence of their lexicons is fascinating, and quite revealing. Of what, I’d rather not venture to speculate. Because I might end up resorting to four-letter words.

If you’re interested in the actual content of the controversy, the best commentary on the subject has come from Will Shetterly in this historically literate and non-profane essay. Do give it a read. It’s interesting even if you’ve never heard of N.K. Jemisin or Theodore Beale before!

I was recently pointed to a new show on Geek & Sundry – but I ended up checking out the first episode of Space Janitors.  Very clever, very funny. David Brin mentioned this site – Creative Barcodes. It looks very interesting if you are a creative type.

NASA 60th: How It All Began