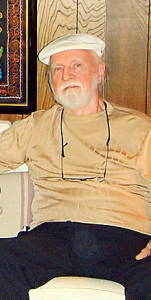 There are some writers whose work is known and enjoyed by millions of people who have never heard their name.  Or even if they have heard their name, haven’t read their work, or associate their name with the work they’ve done.  Richard Matheson (b.1926), who died on June 23, is one of those authors, who also received the acclaim of his peers and his fans.

While in many cases, it is easy to say that an author was best known for a particular work, the same can’t be said for Matheson, whose works included the World Fantasy Award winning Bid Time Return, which is probably better known to most people for its adaptation into the film Somewhere in Time, starring Jane Seymour and Christopher Reeve. Surely, that work is what he is best known for.  Except for his novel I Am Legend, which was adapted into films on at least three occasions, as The Last Man on Earth, The Omega Man, and I Am Legend, starring Vincent Price, Charlton Heston, and Will Smith, respectively.  And yet, he also wrote What Dream May Come, turned into a beautiful film of the same title starring Robin Williams, and The Shrinking Man, turned into a film of nearly the same title, which won a Hugo Award.

A listing of Matheson’s well-known works goes on and on, including several episodes of The Twilight Zone, including the classic “Nightmare at 20,000 Feet.”  His work on Star Trek included the episode “The Enemy Within.” Other television work included Night Gallery, Amazing Stories, and episodes of the mini-series based on Ray Bradbury’s The Martian Chronicles.

While to many of the people who enjoyed those novels, stories, television shows, and films may have been ignorant of the name Richard Matheson, he was highly regarded by his peers and within the genre.  In 1958, he was selected as the Guest of Honor for Solacon, that year’s Worldcon.  He has received Lifetime Achievement Awards from the World Fantasy Con, World Horro Con, International Horror Guide, and the Horror Writers of America.  In 2010, he was inducted into the Science Fiction Hall of Fame, and he was set to attend the 2013 World Fantasy Con as a Guest of Honor until ill health forced him to announce his inability to attend at the beginning of the month.

Matheson’s first published story, “Born of Man and Woman,” appeared in the Summer 1950 issue of Fantasy and Science Fiction and became an instant classic and was nominated for a retro-Hugo. His collection Richard Matheson: Collected Stories won the World Fantasy Award and the Bram Stoker Award.

If You’re Fond of Sea Fights and Demon Lairs: A Review of Waters of Darkness by David C. Smith and Joe Bonadonna

Apes in space…after that, what else do you need?

Three is a Magic Number