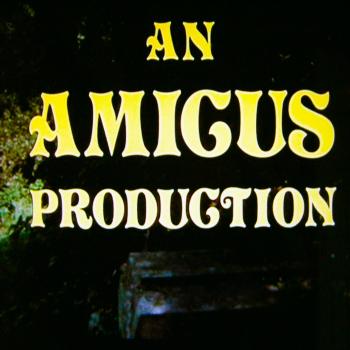 For the past few weeks, we’ve been looking at the current state of the horror industry. Let’s now turn back the clock, to find some classic screams:

Amicus Productions was a small-budget film production company, based out of Shepperton Studios in England. It was founded by American screenwriters Milton Subotsky and Max Rosenberg, who moved production across the pond to save on costs. They started off making a couple of rock ‘n roll musicals, before finding some success with their first Horror anthology film (also known as a portmanteau film), Dr. Terror’s House Of Horrors, starring Peter Cushing and Christopher Lee. It proved to be a successful formula that they would return to, again and again, whenever in need of a success.

Amicus’ gained further notoriety making the first film adaptation of a new SF program called Dr. Who. Dr. Who And The Daleks starred Christopher Lee as the good Doctor, and was not intended as a continuation of the TV serial, having him as a human scientist with the surname Who, rather than a wormhole hopping time lord. The gross negligence of the ongoing storyline would most likely leave modern viewers aghast, but it was the first time the Time Lord was seen in Technicolor and on the big screen. It was a success at the time, and gave them the clout to continue.

The savvy producers figured out that horror and SF were their meal ticket, and got busy cranking a series of Gothic psychodramas, spy films, and hard-boiled SF, including another Dr. Who film.  They became known as a poor man’s Hammer Horror, but where Hammer were creating blood-soaked period pieces, Amicus’ films were updated to modern times, creating something altogether weirder and more terrifying.

The production and special FX are frequently god-awful, yet these pictures are saved by top-notch acting (by film legends like Christopher Lee and Peter Cushing, as well as frequent appearances by Donald Pleasance, who would go on to play Inspector Loomis in John Carpenter’s Halloween), and great writing. Robert Bloch, author of Psycho, wrote three films for them based on his own stories.

It might seem like Amicus were cheap Hammer knock-offs, churning off expendable horror fare to quickly cash in on a fad, working on the cheap. The discerning horror viewer would be remiss in casting off these sooty reels – as with most things, the angels are in the details, and there are ghastly amounts of psychotropic fun to be had.

Amicus’ anthology films are obscure classics that yield fresh rewards upon each viewing, compelling you to watch again and again. In the process, you are sucked further and deeper into the gothic world of British horror; visiting antiquated estates, dealing with voodoo and or gypsy curses, werewolves on the moor, waxworks, jack the ripper, etc. et al. There’s an Elizabethan eloquence, a sense of thespianism, that seeps in, upon losing one’s self in gaslight nasties.

Portmanteau films are perfect for the horror lover on the go: you can watch one or two segments between classes, or waiting for the bus. It models and mirrors ’50s-style horror, EC and Creepy Comics, as well as the modernist dystopian fables of The Twilight Zone. It’s a way to discover a different form, to get away from the manic jump-cuts of today’s music video horror films.