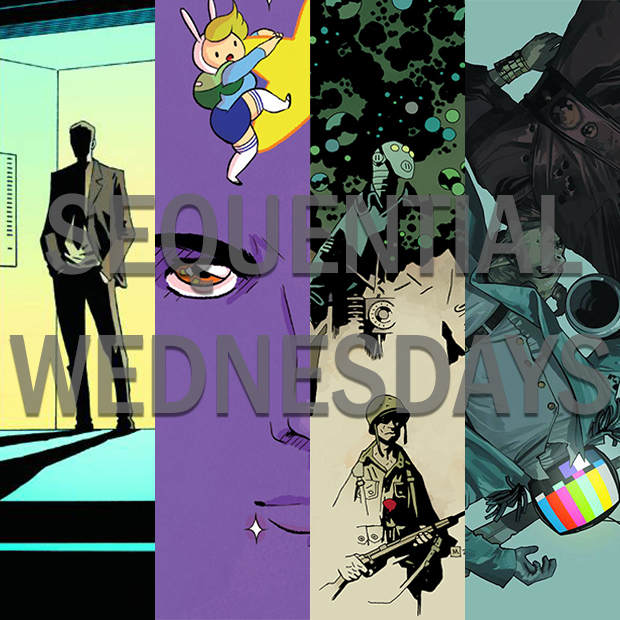 UPDATE: ComiXology’s David Steinberger has announced that it was *NOT* Apple’s decision to not release Saga #12.  Please see my comment below.

It’s genuinely shocking that I haven’t written a full post about my absolute favorite currently-running comic yet.  I’ve blathered on and on to rooms of deaf (or soon deafened) ears about the magnificent work of Saga, created by writer Brian K. Vaughan (Runaways, Y: The Last Man) and artist Fiona Staples (North 40, Mystery Society), and I’m not sure I’ve even approached the iceberg that is my full opinion of it.  It’s been heralded as being a well-timed boon to the comics industry, and for me, Saga goes on to prove the medium as something truly unique.  So far, all 11 issues have been praised for a gripping drama that viciously slices through genre conventions, taking a story the size of a galaxy and condensing it to focus on one newborn and her unprepared parents.  It’s a dream come true for many lovers of comics, many of whom utilize mobile apps (such as ComiXology) to keep up with the latest and greatest in the panels in lieu of venturing to a physical shop.  So why, I ask you, does Apple think it’s okay to ban issue #12 of Saga, releasing April, 10 (the same day this article goes live) from any of the apps in its store?  Because of “two postage stamp-sized images of gay sex” according to an announcement from Vaughan.  Yeah, I’m baffled too.

Saga is an apologetically “for mature audiences only” comic.  While the concept should not be considered offensive by any means, the cover art for issue #1 depicts a young couple, with a swaddled child (protagonists Alana, Marko, and Hazel) at the mother’s bare breast.  Though the necessaries are blocked by the child’s head, it gives you an idea of the candor Saga takes with the subjects of violence, nudity, physical sincerity, and candid use of gruesome images usually relegated to the haunting pages of medical journals.  Hint: it’s chock full of it, though not just for sake of being vapid, sensationalist nonsense as one would assume..  All the scenes have an important role to play in showing how dangerous and wild the world of Saga is for the underdog family.

For the sake of adhering to ASM’s policy, I will hyperlink the NSFW images instead of embedding them.

Just to give an idea of why Apple’s anti-gay with Saga stance is so bizarre, here’s a panel from the first issue of Saga, which released in March of 2012, freely available for purchase through mobile apps on iPhone and iPad.  Yeah. Can’t see why this okay if two fellas wanting to do similar acts of carnality isn’t

The second and third panels are from issue 4, both involving the truly fascinating bounty hunter, The Will. The first really raises the question of what Apple considers “acceptable” gay sex.  The third shows just how bloody the story can get and, as the infractions of sex and violence are often placed together, makes me wonder if Apple is copacetic with such acts of aggression, so long as images of males touching other males’ genetalia aren’t involved.

The fourth panel is from issue 7 and shows that the previous description of “medical journal only” content was absolutely not hyperbole and that this image is seared into my retinas from now until forever.  I have no idea what Apple was thinking when they let that one slide.

Lastly, the consenting lovers consummating their love.  Sure, it’s a more graphic version of the concept that most, but hey, it’s all good.  Definitely right in Apple’s ballpark.  Guess they didn’t notice Alana’s wings and Marko’s multipurpose horns, the inclusion of which solidly place them as alien species to each other.  Whoopsies!  If we can’t have two dudes, why in the world do we have two biologically different people getting it on?  You got me.

The funny thing is, most of these examples shouldn’t have been allowed at all, according to Apple’s App Store submission guidelines:

We view apps different than books or songs, which we do not curate. If you want to criticize a religion, write a book. If you want to describe sex, write a book or a song, or create a medical app. It can get complicated, but we have decided to not allow certain kinds of content in the App Store.

Here’s the kicker to all of this to me: the really huge hypocrisy of this decision.  Take a gander at what the iTunes storefront has available in it’s movies, TV shows, and soundtracks.  You’ll easily find content with insinuations to all the way through actual depictions of guy-on-guy sex.  Game of Thrones season 2 episodes are on there with some sweet Renly on Loras action in episode 3 and Brokeback Mountain with its polarizing plot based entirely around homosexual cowboys and their struggles is procurable for rent or purchase in either Standard and High Definitions.  Hell, both the film adaptation and broadway recording of the definitively all-over-the-sexual-spectrum Rent, along with innumerable variations of the soundtrack, are easily found in Apple’s flagship media purchasing portal.

So, what are our options?  As Vaughan stated in his announcement: fans can seek out a brick and mortar comic shop to purchase a physical copy of the issue, support the Comic Book Legal Defense Fund (CBLDF) by buying signed copies of Saga from them, download the issue directly from the publisher’s website or your non-Apple device, or buy through the ComiXology website and sync your purchases onto your Apple device.

Is there any good news in all of this?  Definitely.  I don’t doubt that this issue will sell better than the past couple of releases due to the popularized hype.  Additionally, Vaughan was keen on thanking Eric Stephenson, the Executive Director of Saga publisher Image Comics, and the organization as a whole for standing behind the creators 100%, fully intent on not letting their iron-clad relationships with their writers and artists rust and decay under the pressure of a corporate bully.