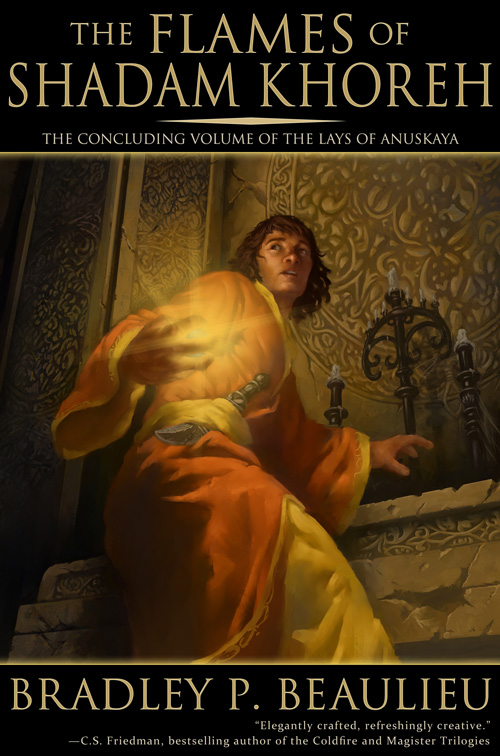 In last week’s post, I discussed crowdfunding as a publishing strategy, ending with a list of crowdfunded books I intended to review. The first of those is The Flames of Shaddam Khoreh. This is the conclusion to Bradley Beaulieu’s The Lays of Anuskaya trilogy. I’d like to thank Mr. Beaulieu for generously providing me with an advanced review copy.

I thoroughly enjoyed the first two volumes in the series, The Winds Khalakovo and The Straits of Galahesh (reviewed here and here). I will do my best to avoid spoilers for any of the books and promise to give fair warning if I include any.

The basic set-up is deeper and richer than your typical paint by numbers fantasy. In The Winds of Khalakovo, we are introduced to Nikandr, second son of the Duke of Khalakovo. He’s betrothed to Atiana Vostroma, daughter of the Duke of Vostroma. These duchies are archipelagos in the Grand Duchy of Anaskaya, which is a collection of archipelagos and islands. The society is basically Imperial Russian in culture with ancestor worship being the principle religious system.

Mixed in are the Arahman, a nomadic people; part gypsy, part Bedouin, their belief system includes reincarnation. They’ve been treated poorly by the Anaskayans, abused and discriminated against. This arose in part because the Arahman believe the land belongs to no one, a belief not shared by most other societies. The Arahman also have the ability to bind with elemental spirits.

A sect of the Arahman has arisen, the Maharraht. These are essentially the terrorists of the story. They are dedicated to fighting the Landed, their term for those who would claim ownership of the land.

In this world, most travel is by land or air. There are too many dangerous critters in the oceans for water travel. There’s a wood called windwood that when cured is lighter than air. When the Grand Duke’s windship is destroyed by a fire spirit while docking at Khalakovo, Nikandr and Atiana’s wedding isn’t the only thing jeopardized. All of Khalakovo is at risk. It doesn’t help that Nikandr has an Arahman lover who is a Maharraht spy.

This backdrop alone would make for interesting reading, but Beaulieu makes things truly epic by having the end of the world hang over everything. Centuries ago, on the island of Ghayavand, three powerful mages (known as the Al-Aqim) created rifts between the material and spirit worlds, and those rifts are widening. They bring with them a debilitating disease known as the wasting. A young Arahman named Nasim may be the only hope of closing the rifts and stopping the wasting. 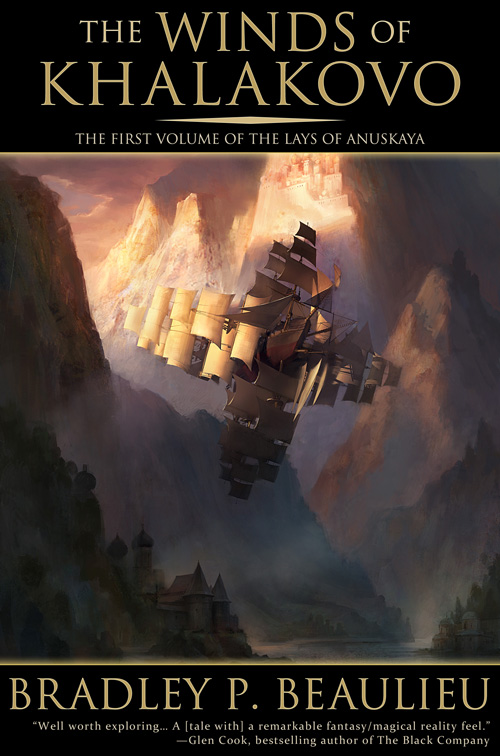 That’s the basic setup in The Winds of Khalakovo. The storry continues and expands in The Straits of Galahesh, with new characters being added and some dying.  In The Flames of Shadem Khoreh, things have progressed from bad to worse. The rifts are widening and spreading. The Grand Duchy is involved in a war with the Yrstanlan Empire on the continent. One of Nikandr’s officers, Stryophan, is on a covert mission, trying to create a second front for the Yrstanlans.  The last of the Al-Akim, Sariya, has captured Nasim and hopes to use him in a ritual to destroy the world. Nikandr and Atiana are desperately trying to find and stop them.

What we have here are real and believable characters. The principal players, Nikandr, Atiana, Nasim, and Stryophan are fully realized, three dimensional people. Many of the secondary characters who have appeared in all three volumes are fully fleshed as well, even if we don’t see things from their viewpoints.  When I finished the book, it was like saying goodbye to old friends.

Beaulieu’s writing is excellent. There are scenes a beginning writer would do well to study. I know I will. A number of passages pulled me in completely. Not a word was wasted, the writing crisp and efficient while giving a vivid picture of location, events, and character. The dialogue was natural and seemed like people talking. The combat and fight scenes balanced well between play-by-play and broad description. The magic system is unique and original, yet not so outré that readers won’t find familiar elements there. 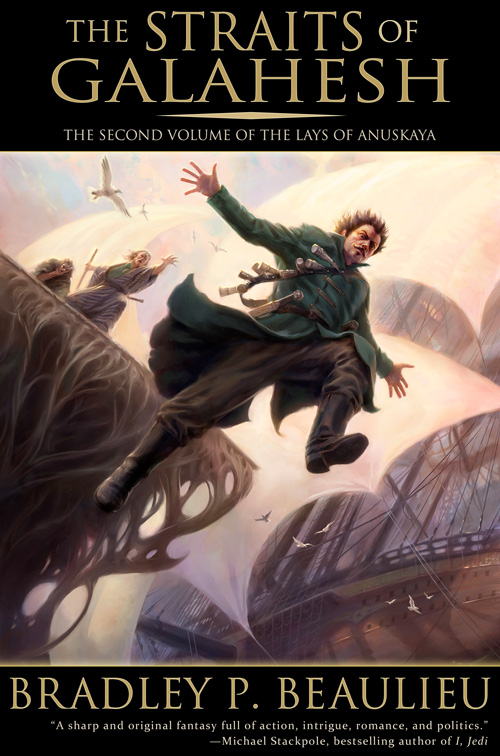 There were unresolved plot threads from the previous books that were neatly tied up. And not necessarily in the way I expected. In fact, the whole ending of the book kept me guessing. There were several ways things could have been resolved. I didn’t know until I finished the book just how Beaulieu was going to handle them. Things were unpredictable.

Well, almost unpredictable. One thing was certain. There would be betrayals. Anything less would be a disappointment and a major departure from the previous books.

These are dark books, but they aren’t nihilistic. Throughout the trilogy there’s a sense of hope. Nikandr, Atiana, and their companions refuse to give in to despair, even though there’s plenty to despair about.

The Flames of Shadam Khoreh is the capstone of a landmark series full of intrigue, swashbuckling, betrayal, sacrifice, and love. This is adventure fantasy for the thinking person. It’s too bad Errol Flynn isn’t available to play Nikandr in a film version. Bradley Beaulieu has set himself a high bar to meet in future works.

I wrote last week about crowdfunding as the method Beaulieu has chosen to publish this book. He talks about it here. The Flames of Shadam Koreh has met its base funding goal. What’s left are the stretch goals, which include interior art. The first two books in the series are being republished at the same time with redesigned covers to give them a uniform look. There are a variety of reward levels, and many of them include electronic editions of the entire trilogy. I’m hoping I have enough left after I pay my taxes to get the signed limited edition hardcovers. These books are keepers.

To ISBN, or Not to ISBN?

What to Do When Your Planet is Trying to Kill You