Today Steve reviews a new book by Edward Willett called “The Moonlit World,” part of his “Worldshapers” series. He thought it was a lot of fun. 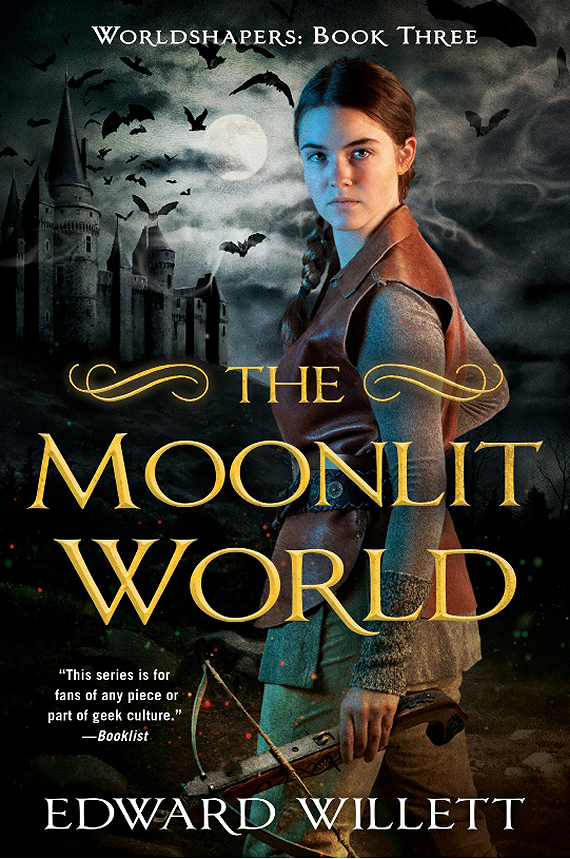 This is a brand-new book; it’s the third book in a continuing series called The Worldshapers, by Edward Willett. I’ve always been partial, for some reason, to stories in which the main character can alter the world around him or herself, like the Lafayette O’Leary character created by Keith Laumer, or Daniel F. Galouye’s Lords of the Psychon. Not quite sure why those resonate with me, except that I probably have always had the juvenile wish to control my own reality… but it’s never happened. (Echoes of the song “I Won’t Grow Up” from Peter Pan.)

Anyway, this is the third Worldshapers novel; I liked it so well that even though I got this one for free as a review copy, I went ahead and bought the first one; I’ll be buying the second one too, because it’s a fun series so far. The protagonist here is Shawna Keys, from our Earth.

Only not… it turns out there is a “Labyrinth of Worlds,” and either our Earth is the “First World,” or our world is a “Shaped” world based on the first one. Or maybe something else… it all gets kind of “meta” around that stuff. So from here on in, I’ll not refer to “our” world; instead I’ll talk about Shawna’s.

The guardian or custodian of the Labyrinth is Ygrair, a Shurak (whatever kind of alien that is); her adversary, another Shurak who considers himself a kind of cop, is (duh) The Adversary. Both are (according to the Adversary) “trapped in human form.” His mission is to kill Ygrair and destroy all the Shaped worlds. Shawna is a Shaper, one of many, who unconsciously or unintentionally created a Shaped world that seems identical to the one she started on, the First World. She has apparently lost all memory of the Shapers’ Academy, and is just now learning about Shaping. With me so far? The shaped world appears identical, complete with ancient artifacts, etc., but it is merely a shell containing people and animals that don’t know they’re artificial duplicates of the originals. The lights in the sky appear to be stars, but as older cultures surmised, they’re merely lights on a shell that look like stars; Shawna’s Shaped world is actually no bigger than it needs to be, complete with the appearance of great age, fossils, etc. Apparently unless you’ve Shaped the world you’re in, you have little to no control over the Shaped worlds.

When Shawna was attacked by the Adversary, she instinctively reacted to protect herself and created a portal, or gateway, that let her and her guide, a man named Karl Yatsar, escape her Shaped world to one based on the works of Jules Verne, and destroyed the portals behind her so that the Adversary couldn’t follow. (Incidentally, did you know that Isaac Asimov, who was a born-and-bred Noo Yawker, was a grown man before he knew it wasn’t pronounced “Jools Voin”?)

I don’t know anything about the Verne-Shaped world, because I haven’t read the second book, but it appears the Adversary followed Shawna and Karl there; Karl, being an emissary from Ygrair, gave Shawna the nano-based technology (through direct transfer) that enabled her to have some control over her Shaping and create another portal, then destroy it. So now they find themselves in the Moonlit World. They must find the Shaper of this world, steal his or her hokhmah (the power to Shape, basically), and somehow go to another Shaped world, gathering hokhmah along the way, and another, until they can get back to Ygrair at the center of the Labyrinth and give her all the hokhmah so she can fix everything and get rid of the Adversary. (If you follow all that….)

Shawna’s kind of a fun young woman—her conversation (both aural and mental rambling) is full of pop references and she has a fair amount of wit, which does serve to keep her from going a bit crazy through all of this. She realizes, when she and Karl are chased by some flying vampires, that this world has a moon that’s always—day or night—on display, which makes it ultra-convenient for vampires, too. In other words, the Shaper of this world is kind of a nut job who’s really into the dark fiction. The world itself consists of a single large/long valley populated by farmers and villagers who are the constant prey of the dark beings.

Karl is kidnapped by two of the vampires, and Shawna is taken prisoner by some suspicious villagers and their priest, who think there’s something fishy about her. So she has to convince the ordinary people that she’s okay, rescue Karl, find the Shaper, steal—by hook or crook—his or her hokhmah, and create another portal to get off this world.

Only it’s not that easy after all: whomever Shaped this world messed around with folklore. Vampires don’t turn into dust or burst into flame when hit by sunlight or staked; they just turn into naked people (well, they’re naked flying vampires, after all); dead naked people if staked. Werewolves can control when they change, day or night, I think. They, too, turn human when killed. Holy water affects vampires, and silver affects werewolves, so that much is true from folklore. Shawna will have to learn as much as she can about the rules while doing all that other stuff. (And so will the reader!)

As I said, it’s a fun series, and I recommend it; I’m looking forward to reading the second one.

I’d welcome comments on this column. Any comment, good or bad, positive or negative, is welcome! (Just keep on point, and polite, okay?) My opinion is, as always, my own, and doesn’t necessarily reflect the views of Amazing Stories or its owner, editor, publisher or other columnists. See you next time!

There are at least 15 principle characters to keep track of. Too confusing? Not a bit of it. Ten years in the writing and well worth it.