In this week’s viewing: Three shows are done for the season, with one coming down to the wire. 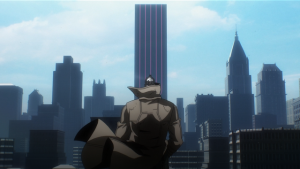 No Guns Life season finale – Everyone gets a chance to heal up, though Pepper uses it to reflect on the events that shaped her and try to make a break for it. Thwarted once again, she gives up, and gives Inui the information she promised about what happened to his old partner. The audience is not privy to that conversation, but apparently the news is bad. And involves Berühren. The fight is not over yet, not by a long shot.

This closing episode is a reminder of everything that is good and bad about No Guns Life. As the story of a war veteran coming to terms with his past choices, it’s excellent and should be an easy recommendation. As a story which has female characters, well, it’s pretty good at giving most of them intelligence and agency, but can’t quite manage to treat them with the same basic respect as the men. For instance, we were reminded this week that the director hasn’t yet figured out how to show a young woman unconcious without aiming the camera right at her crotch. Also, the Podpie episode, and the treatment of the trans landlady, which only improved this season because she was hardly in the story at all.

Recommendable, I guess, with warnings. And we’ll see how it goes if the rest of the story gets adapted. 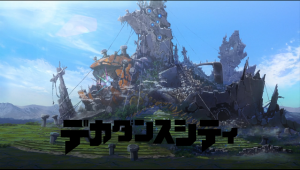 Deca-Dence finale – With the giant Gadoll bound to rouse itself soon, there’s nothing to do but improvise a desperate plan that can only work with every Tanker and Gear giving their all. Kaburagi stays true to his promise to smash everything by destroying both the Gadoll and the mobile fortress. But not the system, as Muninn cheerfully informs him before giving him the access codes so he can have his fun.

Skip ahead a few years and everyone has decided to settle, in more than one sense of the word. Sure, the game is now Stardew Valley rather than a first-person shooter, and Natsume is now an ecotourism guide rather than a fighter, but the humans have had to accept that they’re mostly serving as scenery in an entertainment for the real masters of the world.

So, after all the talk of changing the world and removing the suffocating control of the Corporation, the final message is… never mind? Embrace the system no matter where it places you, and focus on the cool stuff it gives you, like those cloned pets? What a disappointment. 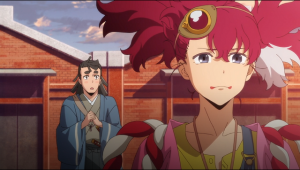 Appare-Ranman! finale – While the gunslingers take on Gil, Appare puts a plan into motion (if that’s the phrase we want here) to stop the runaway train before it reaches Chicago and wrecks at Union Station. Then the show takes a few minutes to remember it was originally about a wacky race, before rushing onward to the heartfelt farewells as nearly everyone goes their separate ways.

There’s a bad case of mixed messages in the wrap-up about Gil, as Dylan declares that they can’t play his game by destroying him with force, and then they proceed to use force to stuff him in a car trunk, and plan to eventually turn him over to the collective force of the state to be imprisoned and/or executed. But then everything about Gil has been bad for this show. As a goofy, deliberately anachronistic steampunk romp, it could be excused much. As a show whose back half is trying to be serious and dramatic and dark about a two-dimensional Joker wannabe wrecking everyone’s lives, there are a lot of things to pick apart about the ludicrous outfits, the unfortunate stereotypes, and the playing fast and loose with the setting.

I don’t know why the creators of this show decided to take a perfectly good comedy and suddenly turn it into tedious grimdark. I can’t think of a better metaphor for 2020, though. I can think of a lot of shows I’d rather recommend. 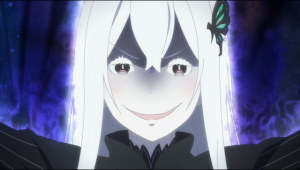 Re:ZERO -Starting Life in Another World- #37 – After restarting at the end of the first trial yet again and getting things settled for the night, Subaru returns to the gateway for another word with Echidna. Instead, what might be the second trial taunts him with the awful implications of the many-worlds interpretation of quantum mechanics. Once Subaru is suitably softened up, then Echidna’s ready to offer a deal, but Subaru realizes he doesn’t want to take it.

Echidna’s deal is a simple play to her own desires: She loves knowledge, so she’s willing to share what she knows in return for even more knowledge. If Subaru is willing to become her personal Twitch stream, she’ll put her knowledge to work for him to find the best route. Eventually. She also seems like the sort of person who wants to explore every possible outcome first, which means whole new worlds of pain for Subaru.

Plus there’s the matter of her role in creating Beatrice and the Ryūzu clones, which does not speak well of her motivations. Also the fact that now she’s cackling like a villain. Survey says: do not accept.

What happens after Subaru’s refusal will have to be wrapped up quickly, though, because supposedly this season of Re:ZERO isn’t continuing past the end of September. If it does, then look for some final thoughts next week alongside the first batch of fall premieres. Otherwise, we’ll put this aside for a bit and come back to it after the premieres.

AMAZING THINGS: Futures Past A Visual History of Science Fiction