One of the most prominent elements in horror is that of the unknown. What mystery lies around the corner can be more frightening than facing the physical monster itself. And perhaps the biggest monster we mortals will face (and immortals scoff at) is the inevitability of death. Because, after death, what comes next? It is our fascination of the unknown, or fear of it in some cases, that has driven many into the entertaining if not controversial field of ghost hunting.

The vast number of ongoing television shows depicting the practice of ghost hunting is a promising sign of the growing interest in this strange but fascinating field. From amateur supernatural sleuths to experienced “professional” investigators of the afterlife, it is more than just the tools of the trade that makes the difference. Whether you are looking for the religious factor, seeking a lost relation, investigating that next best-selling novel or just in it for your inner meddling-kid hoping to pull the mask off ol’man Jenkins, the best tool a paranormal investigator can have is knowledge. 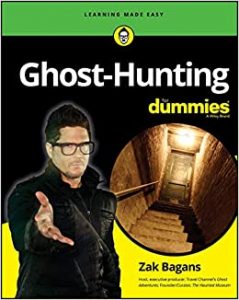 Ghost-Hunting for Dummies by Zak Bagans and published by John Wiley & Sons, Inc. is an insightful book that can provide both knowledge and entertainment. Bagans is the host and executive producer of the paranormal documentary series Ghost Adventures on the Travel Channel as well as the founder and curator of The Haunted Museum in Las Vegas. With a flair for drama and a bit of theatrical arrogance, the author does not shy away from stating ideals based on previous findings along with his own subjective opinions.

This is more than just a how-to book directing where to look for spirit entities and explaining the ever-changing technology behind the tools of the trade. Well okay, sure, that is the true body of this volume and perhaps the reason most of the readers will be seeking it out, but there is much more here. Ghost-Hunting for Dummies is a behind-the-scenes peek into previous investigations and just as compelling as many of the programs on television. Mixed with historical accounts of popular haunted locations, the case study examples, and thorough documentation of events is an ideal lesson-plan for the novice and suitable checklist for the more experienced investigator.

From the philosophical reasons of why we are fascinated with the paranormal to the simplistic curiosity of the afterlife, the fears of the unknown are not so scary when you look at ghostly elements with open minds and raw curiosity. Easy to read and follow along, the book Ghost-Hunting for Dummies by Zak Bagans is the quintessential guidebook for anyone interested in the ins-and-outs of studying the paranormal. Who knows, maybe you too can get your own television series just by filming yourself trying to contact your dearly departed Aunt Edna. All it takes is a little bit of determination, a whole lot of belief, and maybe a handful of handy tips from this book.

Are some topics too serious for humor? A lesson in manners has never been this much fun.