Home Film/Televison A Beautiful Plummet: A Review of Upside Down

“And our love changed the course of history forever” is a fine concept to base a story off of.  However, it’s a disingenuous and careless line of dialogue that should have been excised from the script of Upside Down upon review number one.  Sadly, that, and many similar offending snippets of exposition, are featured heavily in this stunning mess of a film.  Despite parts of the movie being a colossal train-wreck, I’m pleased as punch to have been able to catch it before it disappeared into the misty void of films that barely last one week on the screen.

Upside Down is a basic star-crossed lovers story with a surreal palette of world-building.  It’s set in a universe where the impossible occurred to allow for two nearly-touching planets to exist with polar gravitational forces, revolving around one Sun.  Lovers Adam and Eden (thank the holy stars they didn’t name her Eve) fight against the pull of their respective gravities, metaphorical and actual, to find true love together.  Essentially it’s Romeo and Juliet starring in a quasi-futuristic commentary riddled with unsubtle devices such as the divide between the world “up above” depicted as a glittering utopia exploiting the oil-drenched world of lawlessness and bleakness “down below”.  The handling of this theme is pastiche at best.

The unfortunate truth of what makes Upside Down an easy target for harsh criticism is the wasted potential seen in every frame.  The cast is talented and varied (there must be a mention of the underdog-cheering rascal Bob played by Timothy Spall who steals every scene he appears in), the world is interesting and filled with well-thought rules and witticisms to accentuate it, the visuals are drop dead gorgeous, and the score flows and hits all the emotive points necessary.  Where did it go wrong?  What part of Upside Down fell with such tremendous momentum that all other facets of it plummeted in the wake of the one outlying pariah’s velocity?  The abysmal writing.  Exposition that reeks of pandering and oozes the need to cater to the lowest common denominator of audience.  Upside Down is victim to not expecting the audience to understand.  Untrusting and afraid, the movie opened with a solid 15 minutes of off-screen narration explaining the workings of its universe to introduce us to what it is so very sure to be the must-know facts necessary to glean the proper story.  Disrespectful might be the word.

It’s becoming abundantly clear that a drop of science fiction mojo is a substance that will be added to the formula of many movies, like the inexplicable pink power Adam uses, for better or for worse.  Though please don’t misread, the blatant disregard for the science in science fiction when executed with panache is something to adore in stories.  There’s a wonderfully off-beat stylization that occurs when worlds are built for the sake of an inventive narrative with little to no regard for modern science.  It forces the syntactical evaluation of the term “science fiction”; making us consider that what is portrayed as scientific fact in a fictional world has no obligation to adhere to conventional truths of real-world science. Be that as it may, Upside Down just couldn’t commit and for all the sensationalism and daring gusto possible, it hits the ground wasted as it revels in pointing out the differences between the science of its narrative reality with that of our world.  It screams the shrill tones of defeatism and the unwillingness to stand up straight and present the story without an embarrassed stutter of insecurity. 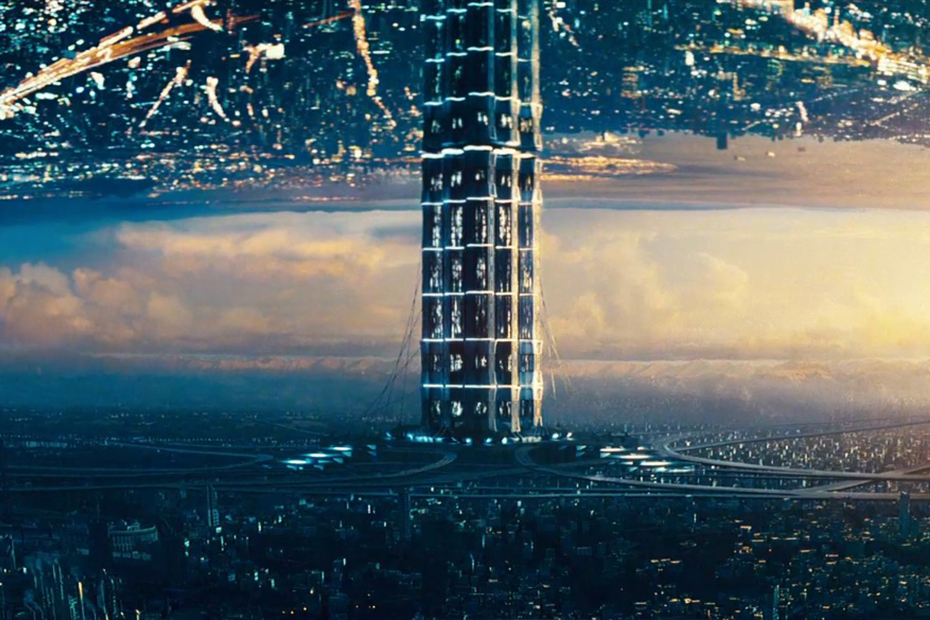 Despite all of this, another viewing may be necessary just to experience the visuals of the movie.  Upside Down is one of the most inventive and powerful movies with respect to the visuals in recent months.  A fact that only greatens the disparity at the lack of a solid story to justify such vivid and beautiful digital work.

All of the above critique aside, Upside Down deserves your attention.  It’s trying something wholly original, even if bogged down by less fantastical portions, and that needs to be celebrated.  Saying this movie is good due to the parts that are tremendous in their own right would be a disservice.  Upside Down works hard to strive for visual difference, at the sake of story.