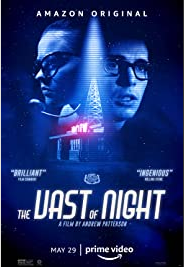 I approached the “The Vast of Night” directed by Andrew Patterson, written by James Montague and Craig W. Sanger, as a viewer who is a longtime lover of B, C and even D science fiction movies, ready for some thrills and a little fun with my popcorn. In the rural area where I grew up, movies such as “Them”, “Attack of the Killer Shrews” and “It Came From Outer Space” were the late night and Saturday matinee fare on our local TV stations. I also loved “The Twilight Zone” and its small slice of eerie life,asking was it or wasn’t it real and never letting you know what happened next after the show ended.

(And yes, I’m a huge fan of A level science fiction movies too but “The Vast of Night” wasn’t trying to be in that category as far as I can tell.)

So I settled in to watch the movie, available now for streaming on Amazon Prime. Bottom line (and no spoilers here), I enjoyed it, recommend it if you like this genre as I do and give it a B+. Here are my detailed thoughts:

I loved the small town setting and feel, which mirrored the old movies so well. The events in the classics of the genre almost always seemed to happen in an isolated place, where the characters were on their own to cope and survive or not. When Everett (Jake Horowitz) the cocky radio DJ and Fay (Sierra McCormick) the young but plucky switchboard operator went walking or running through town as they do repeatedly, I’d cringe for them, because it was a small town and so deserted. Everyone else is at the big basketball game, you see, which is where the movie opens – brightly lit, full of people, a slice of normal life in a place about to get very weird but only for certain people.

I didn’t mind the nod to “The Twilight Zone,” with references and clips from a mythical program entitled “Paradox Theater”, but I didn’t care for the moments when Everett and Fay themselves were shown as characters in a “Paradox Theater” episode. The device pulled me out of the flow of the movie and seemed gratuitous.

The extended early scene where Everett and Fay walk endlessly through their small town of Cayuga and talk and talk and TALK ran long to me. I got that Fay was a science buff bigtime (nice switch – in the old movies it was usually the crewcut guy who read all the magazines and knew all the science in the world) while Everett was clearly more a man of the world (how old was he supposed to be?) with a nice veneer of sophistication. He had a killer radio voice too and knew all about tape recorders. But I thought the sequence went on too long and got too wink-wink cutesy with the two of them discussing far out futuristic ideas like self-driving cars and tiny phones with TV screens. Ok, yeah, so we know which ones actually happened and which ones haven’t as yet but again, did we need so many examples?

How could it take so long to walk through a tiny town?

I thought this was a problem the movie suffered from in several places and could have used tightening up. (I don’t write or make movies but I do write novels so I know a thing or two about pacing.) When the caller who knows mysterious details about a government coverup conspiracy and the “is she crazy or telling the truth?” old lady shared their stories…wayyy too long for this viewer. Yes, real people do want to share too many extraneous details in interviews and go off on tangents to the actual story but in a movie or a novel, that kind of indulgence can get deadly. In fact, I was nearly ready to bail on the movie at one point because of this overly expositive exposition but I hung in there because I liked the characters and I was intrigued overall.

I found myself most fascinated by the switchboard. I could have used even more scenes there. The idea of Fay being connected to the entire world and getting little snippets of what was happening, as well as getting cut off in the middle of scary moments really worked for me. Heightened the mood and the goose bumps factor.

I got annoyed with her for running every place. Hello, old fashioned manually driven cars do exist in town and Everett is right there with one at his disposal for much of the movie. It became a point of disbelief to me after about the third time she sprints off when he could have driven her to her destination much more quickly and safely.

I did believe the two of them became so caught up in what was happening that it never occurred to either of them to go back to the well-lit gymnasium and try to recruit help. I understood their stubborn ownership of the events, especially in light of Everett’s constant reminders it might be a news story. I could see him leveraging it in his mind as a way out of the tiny town of Cayuga.

So the movie took its time building and just at the point where I thought the plot was going to kind of peter out and never really give any answers – WHOA. Head turning, all-in EVENTS. I’m not giving spoilers but I was riveted for the last half hour or so and rewatched the ending a few times. I’m still thinking about it today. I was happy I stayed with the narrative.

There are a few unanswered questions for me inagoodway. What happened to the strange, too perfect out of town couple who keep popping up at odd moments? Were they part of the overarching events or victims? Given the radio broadcast and things the conspiracy theorist mentioned, why didn’t any government agents show up? (If they did, I missed them.)

At some points in the movie I felt as if this was a “Close Encounters of the Third Kind” adjacent story, almost as if that movie was off in the distance, happening in parallel maybe or somewhat in the same timeline but decades hence. The old lady’s long recitation of local history and her own brush with the inexplicable really gave me that feeling.

I would have loved a tiny epilogue with the townspeople but I do feel the movie ended in the right place.

Sign me up for more of these “Paradox Theater”, movie length episodes!