Shebat Legion, fantasy author and editor and breast cancer fighter is hosting a fund-raising anthology to help fight breast cancer.  Below, she describes the origins of the project.

On December 15th, 2018, I underwent extensive surgery in relation to a diagnosis of Breast Cancer. The surgeon went in with her blade, cutting, attacking, all with the plan to remove anything affected and, because it was a cancer that mutated not once, but twice, removing vulnerable fields, being thorough. I received a double mastectomy, had a part of my chest wall removed along with twenty-eight lymph nodes.

I then underwent aggressive treatment, the chemo, the radiation, all with the idea that the cancer still lurked, like an invisible demon bent on my destruction, and the battle raged, me being the unwilling target. But fighting, acknowledging the war I found myself in. Me against it.

The day that I was called back for further testing after a routine mammogram, I was nervous, but not afraid. When, after the diagnostic mammogram was performed and I was asked to get an ultrasound, I assumed that a cyst had been detected. Year’s before, a cyst had been found and eventually, just went wherever cysts go when they arn’t cysts anymore.

During the diagnostic mammogram, I was asked if it would be okay if I were to allow a junior technician, a young woman, to stay during the procedure, to become familiar with the mammo machine. Whatever it is called. I can’t find the name of it. I’ve looked. One would think it was called something. Isn’t everything called SOMETHING?
I agreed to let the technician in training stay in the room. She was quiet, but seemed pleasant. The technician was kind.

At the check-in desk at the Breast Assessment Clinic at Peterborough Health Center, the receptionist was welcoming. The waiting room was decorated with beautiful quilts adorned with pink ribbons. There were posters on the wall concerning dragon boat racing, a fundraiser for this department. There was free Wi-Fi.
The receptionist checked on me between tests, while my husband waited. When it was time to get the ultrasound, the receptionist was at my side. Into the procedure room, the technician and her trainee followed us. The woman who did the ultrasound was patient and compassionate. We were now a party of four. There was light conversation. I was not afraid.

One expects an x amount of time during a procedure, but again, I imagined a cyst, and was not afraid. It wasn’t until, in my, let’s call it passiveness, because my cooperation depended on my inactivity, i noticed that there were unshed tears in the eyes of the young diagnostic mammogram trainee.
That was the moment that I knew that something was wrong. I looked at the woman doing the ultrasound and said, “oh my god.” I felt cold. I began to shake. “It could be a cyst, right? Silence. “Right?”

It was the sweet-natured receptionist that said, “sometimes, it is benign.” It was the ultrasound technician that held my hand tightly, informing me that she wanted to place some tags inside of my breasts. The women, the mammogram technician and her trainee, had moved closer to me, and it was a circle of women. I could feel, this support that was in every way, a magic that was tangible, cradling me in love and protection. There was a fierceness to this support that was fervent, a barrier, as if there existed a circle of salt.

The women held me, their minds and hearts, as the tags were placed, hurting me. The circle held me as, after the tags were inserted, I shook and wailed. It was the kindly receptionist that held me in her arms as I wept and nobody left, they stood there, not leaving, no. And in some ways, in the ways that count, they have never left me, but are still with me in that salted circle, these women from the Breast Assessment Clinic at Peterborough Health Center, and I have never been alone.
No words can ever express the gratitude toward the women of this department, with their quilts and their dragon boat races. I was to come to know them well, these women who work there, these women who are on the frontline. They not only offer testing and support and information, but introduce other women who volunteer tirelessly, to help provide wigs, and prosthetics and transportation and counselling, free of charge. These women, too, are forever in that circle of salt.

This department relies heavily on donation, and so, I am doing what I can to give back what I can, in a way that I know how to do.
I am doing a book. Klarissa Dreams Redux: The Illuminated Anthology. It will have over forty paintings painted by my mother, Klarissa Kocsis, paired against stories of every genre, because a dream is everything. That is its tagline. A Dream is Everything. It’s going to be beautiful. It’s going to be in hospital gift shops. It’s going to be in the clinic where I was diagnosed .It’s going to be in bookstores. My aim is to raise money along with awareness because those are the tools of war. And you can be in it, part of the circle, because in the end, we are never alone. We don’t have to be alone.

Cancer is never OVER. Cancer is always NOW. Right now. Waking up, now. Last thing on your mind, now. Haunting your dreams like a sadistic incubus, now.
I have chosen to place myself, solidly in view, as a spokeswoman to advocate for breast screening, because I never, NEVER want anyone who reads these words to forget one specific fact.

This could be you.

These are, to paraphrase myself, my words, as I have done, to spread my message, to share my journey:
“Be angry. Hate that cancer. It is your enemy and it is trying to kill you. Rage at it because, make no mistake, this is a battle. This is war.”
Are they the right words? I don’t know. I have words of comfort for only the ghosts and survivors of the battle lost, none for the soldiers. I have only my truth to share, that cancer is a demon, anti-matter, evil incarnate, and against it we must rage, using anger as a sword.

To this end, I am seeking stories and support for the anthology, Klarissa Dreams Redux: The Illuminated Anthology.

Illustrations in the book are by Klarissa Kocsis – Shebat’s mother – an accomplished, award winning Toronto-based artist, where she regularly exhibits.

Submission guidelines and contact information can be found below – 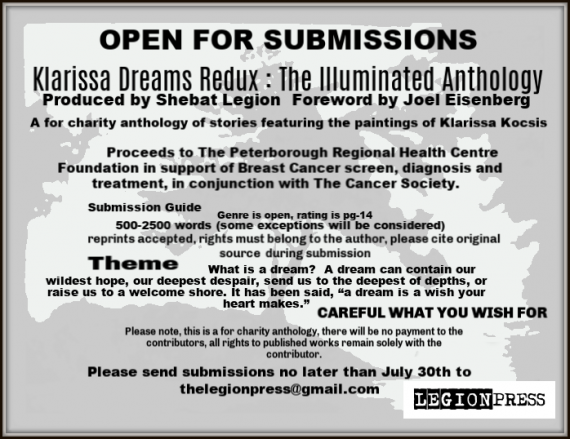 Submissions should be sent to