In this week’s viewing: Your correspondent has been travelling and unable to keep up with simulcasts, so let’s look at two series about a traveller.

Editor’s note:  this post got lost in the Worldcon shuffle.  Our apologies to author Petrea and her readers)

I’ve been off at Worldcon this past week, so in place of the usual commentary, here’s a look at a question that’s been nagging me for months… 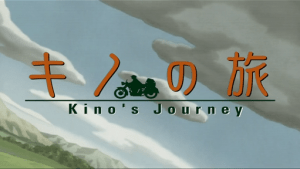 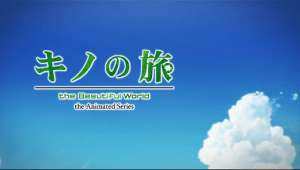 Last fall, there was great excitement about a new adaptation of Keiichi Sigsawa’s Kino’s Journey books. The first adaptation, in 2003, won a lot of fans for the tales of a young woman and her talking motorcycle travelling in a world of city-states with unique and peculiar customs. Sigsawa had been producing a book a year in the meantime, so there was now tons more material to choose from and bring in a new wave of fans.

But after a few episodes, disappointment set in. The buzz was now that the new series didn’t measure up to the old. Once it was over, long-time fans were firmly convinced that the 2017 series was solidly inferior to the 2003 one.

With HIDIVE recently picking up the 2003 Kino’s Journey, it’s now possible to test this assertion. Is it just the familiar way that things we like grow better and better the more we look back on them, or is the 2017 series truly a failure? Let’s take a look.

(A note on gender: I’m aware that some people see Kino as non-binary. On the basis of all the information I have, my best guess is that the author intends for Kino to be understood as female.)

Both series run a similar length. 2003 has 13 episodes, with a couple mashups of multiple stories and one two-parter. 2017 has 12, with one multi-story episode.

In 2003, the stories to adapt were chosen by the production team. For the 2017 series, a poll was run asking fans to pick which stories they wanted to see adapted. This resulted in major differences in the type of stories represented.

5 of 12 episodes in the 2017 series involve recurring guest characters, and 6 involve the various travellers interfering or attempting to interfere with local customs, usually through violence. In 2003, Kino is much more of an observer; the guns are truly only her very last resort.

2003 is also willing to step back and make Kino a supporting character more often. When she barely appears in a 2017 episode, it’s usually because the story is about one of the other recurring characters. But in 2003, the stories are more often truly about the people she meets in the various countries. This frees it up to provide a much wider range of stories. 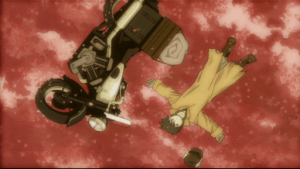 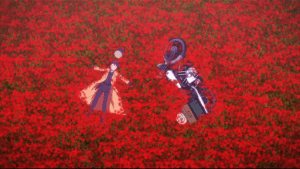 Three stories are adapted in both series: “Colosseum”, “Land of Adults”, and “The Kind Land”. The last two are practically identical in both versions, but the order in which they are presented in 2003 sets up the emotional payoff at the end of “The Kind Land” better. Then again, this probably wasn’t much of a consideration in 2017, as the reason it was voted in was probably that it’s the origin story for one of Kino’s guns, and that doesn’t depend on the order the stories are told in.

“Colosseum” has big differences. It’s the two-parter in the 2003 series. The extra time is spent filling in the personal stories of the people Kino is forced to fight and justifying and minimizing the actions she takes at the end of the story. In 2017, after all has been explained, it’s clear that Kino has mostly made up her mind before she ever enters the arena, and there’s no attempt to excuse what she does.

The 2003 version suffers somewhat from dropping most of the narrative surprises early in the story, and makes a very unfortunate decision in showing that the local king is evil by giving him an effeminate appearance. The 2017 struction of action first, explanation later, suits the reveals better, and the king is still plenty evil even without lipstick.

Author Keiichi Sigsawa is clearly something of an sf fan, and one of the most fun parts in either series is seeing stories play off of recognizable sf settings.

In 2003, there’s a story looking at a society affected like the human one in “Altruizine” (from The Cyberiad), considering how people might adjust long-term if the effects were permanent. It takes a similarly dismal view of how people would react, but ends on a note of grace.

The 2017 entry is a take on Inverted World, but works against it by making the city full of nice people and not forcing them into a situation which makes their way of life completely impossible. (It almost does, but this is another story which was probably voted in because Kino gets her guns out.) 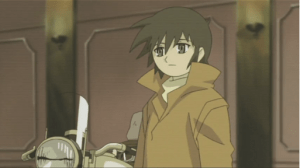 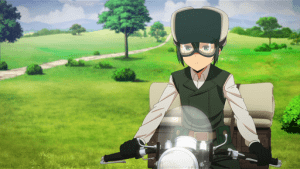 Kino and Hermès are played much the same way in both series. In 2003, Kino comes across as more detached and Hermès has more of a gift for malapropisms, but that could easily be down to the choice of stories and the evolution of Sigsawa’s writing style. Both series cover Kino’s origin story, though 2003 includes a suggestion of a second origin. 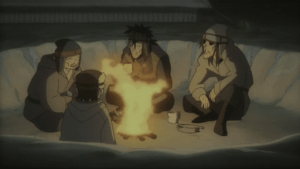 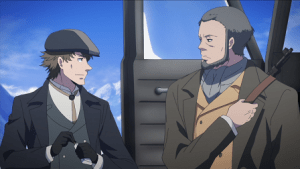 2003 puts real effort into making each land look distinctive in dress and architecture, but then squeezes it all into a maddeningly limited palette and slaps a filter over everything to make it look like it’s playing on an old, worn videotape. An interesting idea, but one which does not feel worth the distraction it causes.

The 2017 artwork is blessedly clear, sharp, and not quite as limited in color range. However, dress and technology range from Generic Late 19th Century Western to Generic Late 20th Century Western, and, with the exception of two cities that are travelling vessels, every land looks very samey at a distance. Even the two vessels don’t look that different from each other inside.

This is a totally unfair comparison, because 2017 has so much less to work with in variety of stories and settings. It does a workmanlike job of supporting what it’s got.

2003 has settings from high-tech to primitive to one where reality itself may be breaking down, and the sound department rises to the occasion. The eerieness and horror of some places is particularly well-communicated.

Opening and closing themes have much the same sound and sentiments, and could be swapped around without making much of a difference.

With a score of 3 wins, 1 loss, and 1 tie, that makes 2003 the Kino’s Journey you should watch. But there certainly is room for it to be improved upon, so while I now understand the disappointment of long-time fans, I’d like to see another try made sometime.

Unfortunately, that’s unlikely to happen soon. Having only niche success in both English and Japanese means it’s not a good prospect for another try. What we should try hoping for instead is for the original books to be picked up for translation.

In the meantime, you can check out the 2003 series (dubbed and subtitled) at HIDIVE or Netflix, and the 2017 series at Crunchyroll (subtitled), Funimation (dubbed), or Animax (subtitled).

SpaceX Reveals More Details About Its Future City on Mars

The summer convention schedule marches on. Already we have sampled the delights of E3 and Comic-Con, and WorldCon looms on the horizon. This weekend another destination convention takes the stage, as Gen Con 2013 gets underway Thursday, August 15, in Indianapolis. Tens of thousands will make the pilgrimage for the annual celebration of all things […]