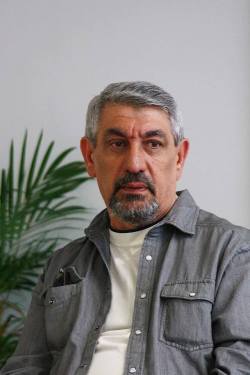 Saad Hadi is an Iraqi writer Born in Baghdad in 1956. He has worked as a journalist since 1975 and holds a Master’s Degree in Art History from the College of Fine Arts, University of Baghdad.  He has issued six books in Arabic: four novels and two collections of stories. His latest novel, The Lame Whores Birds, was published by Moment Digibooks in London, in 2013. Currently, he lives in Espoo, Finland.
I met him though Sivuvalo Project (Hold by Peruvian poet Roxana Crisólogo) and of course immediately we saw we have a lot in common.

Tanya Tynjälä for Amazing Stories: How do you view yourself as a writer?

Saad Hadi: I started as a poet. That is almost a traditional thing for the writers in Iraq. I worked as a journalist for a long time and I started to write short stories. My first story collection was I think, not so bad but not so well neither. Maybe I can be considered a flash fiction writer. I always try to give a poetical dimension to my stories and they always have a strange feeling inside. There is a mix between a lot of elements and of course fantasy and reality.

AS: So you use what Jakobson called poeticity, meaning the poetic function of the language use in prose texts.

SH: Yes, it is important for me as a writer but it can also be complicated. Sometimes I force the theme to the story to fit in this poetical language and sometimes I can lose simplicity. And then I realized that there are also a lot of poetical things in the reality that I can use in the text. The life we live is not only what we see outside. There is also what we have in our souls and our minds. We live in a long dream, perhaps we are now in the dream and it is at the end of our lives that we will wake up.

AS: How did you progress from stories to novels?

SH: In the 90’s I wrote my first novel that was also a mix between fantasy and reality. At that time I did not travel and the novel talks about travel but in the mind, with the imagination and the monkey was the companion but not from the reality. My second novel is something like a collage of a lot of texts. There are some poems, reports and stories. For me it was a new style of writing and I am very satisfied with the result. When I returned to read the text 10 years later I find a lot of good things there.

AS: Was it difficult for you to be published?

SH: Not too much but of course some. There is a crisis in the Arabic publishing world. You are asked to pay in order to be published. I left Iraq 10 years ago, a lot of things have change there, and a lot of new publishers don’t know me well. Perhaps that makes it a little bit more difficult for me to publish there.

AS: Have you tried to enter the international market?

SH: As a writer that cannot be your goal. Maybe if somebody likes your story, they are going to translate it, it comes natural. Even in Iraq I did not try. I am not so interested in that. I want to enjoy life and to write.

AS: I read your story Matryoska and it is an interesting story that can be labeled science fiction. Is there a tradition of science fiction literature in your country?

SH: There is a collection of stories that Hassan Blasim has edited with various writers of two or three generations. Some are well 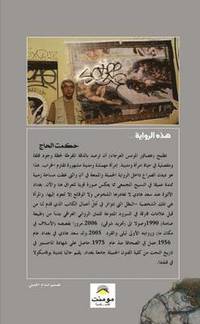 known and some are new writers. It is all that I know. There were some writers before but they were not writing just science fiction.

AS: This same story talks about human relationships. I wonder what kind of themes inspire you to write.

SH: A lot of things. For example I studied art and I am interested in the story of art. Also a lot of aspect in life makes me think about new points of view. A main theme in my writing is loneliness. I like to be alone, with myself, my imagination. Everybody needs to be alone from time to time, specially a writer. You need to be with people but also is good to enjoy your moments of loneliness. It doesn’t mean you have to be like an island or surrounded by walls. For me it is not a negative word. I am also interested in the misunderstanding between people, how to make the right contact, why we can’t build the right relationship between us even if we try every time, how even if we have a good relationship with somebody, there is not a real contact. There is just maybe a contact between bodies or words but it is also something more profound that doesn’t allow us to be really together. It can be race for example. What motivates me to write is to discover the place between reality and imagination, to mix them and made a new word through writing. My way of writing is to correct a lot, to eliminate all that is not necessary, make the phrases as short as possible.

AS: What about now?

SH: I have a lot of ideas. For me here in Finland is a good time to write, because I can relax and think well. I can remember my past, my life in Iraq, how I live and suffer there. I am now trying to make a special word around it by writing. Maybe in some years I will understand more this society and I will write something about it. I have a project to write this year, about the history of Iraq and the western society.

And as a special treat, here is one of his short stories. 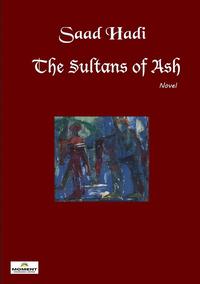 I receive always letters from dead people. Someone throws them under my door and goes without a trace. When I read them, I discover that they are telling old tales, answer vague questions, talk about the conditions of the dead in their distant world. I tried to write replies, but to whom I shall send them? They arrive without addresses, just yellow papers, end with signatures of people who passed away long years ago.

They were accumulating around me. I tore or burned or throw them from the window, But the dead rewrote their letters and sent them again. I am now briefly dipping into a sea of letters.

Yesterday, after months of suffering I woke up in the morning and found only one letter. I opened it and read the following lines:

“The letters will not stop for you. There are a lot of papers in the other world, we want to get rid of it. Angels no longer use that papers to record sins or bad deeds.

Each of them now has a small device, writes in it what he sees and hears. None of them carry notebook or pencil. Perhaps mechanical angels will be used instead of these real angels soon. It is not only the earthly world which is changing but also our world. There are billions of sheets around us. The dead, of all generations, aren’t stop writing. They write letters, poems, stories, novels and memoirs all the time, and send them to various direction or addresses, but the piles of paper remains as they are, and double daily. No hope to getting rid of them, they will not disappear quickly. This is our fate, the fate of the creatures in the earthly and heavenly worlds, we must live to read what others write indefinitely.

In September 1937 an English Don named John Ronald Reuel Tolkien published a children’s book called The Hobbit. Robert E. Howard, the creator of Conan, had been dead for fifteen months. In 1950 Gnome Press published the first Conan stories in hard cover. July 1954, Tolkien begins publishing a second version of his mythology, but […]