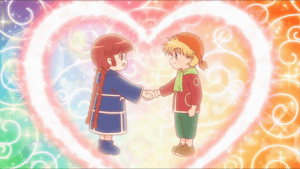 Magical Circle Guru-Guru finale – Of course it wasn’t going to be that easy to defeat Giri. What it’s really going to take is a battle royale featuring pretty much every named monster and ally from the entire run of the series. It’s going to take Kukuri summoning all her power. It’s going to take Nike finally stepping up to summon the legendary Hero’s Sword… and then proving once again that he’s just the sidekick and Kukuri is the protagonist.

It’s an aptly grand finale, and just sweet enough to make you happy for Kukuri without overwhelming the humor. Because of course it needs to get in one last bathroom joke. And it ends on a perfect note, poking at one last gaming trope— the sequel that’s basically the first game all over again.

This might not make it onto my list of the best shows of the year, but it’s a good solid show that’ll be part of my recommendation list for a long time to come. As long as it’s still available, anyone into high fantasy, RPGs, or retro games is going to hear from me that they need to check this out. 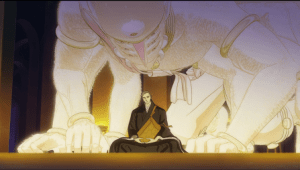 Land of the Lustrous #11 – The trouble with adapting manga is that a TV episode usually covers multiple manga chapters, and the natural breaks in the narrative can’t always be made to line up with episode breaks. So from time to time one gets an episode like this with too many different tones and topics crammed together.

The business with Padparadscha is obviously important if it had to be squeezed in here, but it distracts from the big development of Phos realizing that Kongō is hiding a lot from the gems. The others have apparently figured this out already, but so great is their loyalty that they’ve chosen to avoid questioning Kongō. And that loyalty is so strong, even for Phos, that e literally starts falling to pieces at the thought of defying him.

I’m pretty well convinced at this point that Kongō is the last fully integrated human being. On the other hand, we’ve now learned the Lunarians aren’t just the spirits of humans. This one was clearly a dog. (A white dog, specifically— “Shiro” = “White”, and see below for more on that.) Kongō essentially says that the dog’s spirit has been released. So are the other Lunarian attackers not just remote-controlled avatars, but also living beings of a sort which die when their bodies are destroyed? Or was this one special in that way as well? 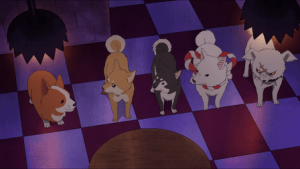 Hozuki’s Coolheadedness 2 #11 – Speaking of manga adaptations, if the manga is highly episodic, you can just avoid trying to create a smooth continuous narrative and produce mini-episodes, which is how we get the two stories per episode in this show. The first this week is fairly slight, giving us a chance to meet some of Nasubi and Karauri’s embarassing relatives, and reminding us that Hōzuki is a former child sacrifice. Having only been mortal for a few years, it’s no wonder he has no idea how to behave in a family home.

Then Shiro and his co-workers take the new guy out for traditional after-work drinks and discuss how various kinds of dogs wind up working in Hell. The top dog is a hard-charging Doberman immigrant. When they say he only came to Japan in the Meiji or Taisho era, it means he’s had maybe a century to work his way up to his current position— pretty impressive in an workplace full of immortal spirits. The corgi who occasionally slips into English may be an immigrant too.

Shiro’s boss is a native of Hell, and his other two co-workers are obviously Japanese, being Shiba Inus with good Japanese names, Aka (Red) and Kuro (Black). But what is Shiro himself? He looks like a related breed like maybe an Akita, but a more intriguing theory is proposed: that he’s descended from divine messenger dogs.

The most famous divine messengers in Japanese mythology are white foxes, but as it’s pointed out, white animals of all sorts make appearances. This is the symbology also being invoked by Land of the Lustrous with its Shiro. 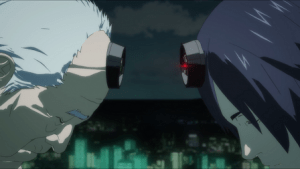 Inuyashiki Last Hero #10 – Abandoning his quota, Hiro starts raining aircraft on Tokyo at random. On the ground, Mari has made the unfortunate choice to visit the Tokyo Metropolitan Government Building, which is the go-to skyscraper for mimicking the 9/11 attacks in Japan. (This is the same building which was destroyed by a terrorist attack at the beginning of Terror in Resonance a couple years ago.)

Things proceed much as expected from there. Ichirō interrupts the attack, shepherds the remaining planes to safety, and confronts Hiro. Hiro is uncontrite, so they proceed to have an all-out aerial cyborg butt-walloping of the sort where destroying the ISS is a minor aside. Once Hiro is out of the picture (OR IS HE), Ichirō can go spend a long scene thinking he’s arrived too late to save Mari, until it is time for her to arbitrarily revive.

Meanwhile, Hiro is just operational enough to get someone to bring him more fuel. Now is the time when he either (a) guides the asteroid in to try to destroy all of humanity, or (b) somehow figures out who Ichirō is, tracks down his family and does something horrible to them, then goes and gets the asteroid. 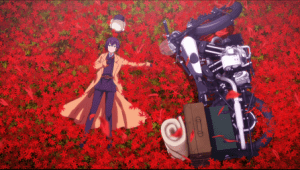 Kino’s Journey -the Beautiful World- the Animated Series #11 – A traveller named Kino stops for a few days in a place where everyone gets a brain operation at age 12 that turns them into sociopaths. There he dies defending a little girl who wants a new name and a way to escape. And that girl is our Kino.

The Land of Adults is so unambiguously warped that there isn’t much to analyze, so let’s talk about something that’s been hanging over this series from the beginning: the confusion over Kino’s gender. This column has been using female pronouns for her, but you may also find commentary making her non-binary, and if you’re watching on Crunchyroll, you may have noticed that the show description makes her female, but the subtitles in the first episode had Hermès referring to Kino as “he”. What gives?

In the very first book of stories about Kino, her gender is kept ambiguous (easy in Japanese, which does not require gender to be explicitly marked) until the last story, in which she is shown to be female. This twist is so well-known in anime fandom at this point that revealing it is like saying that a young Clark Kent is going to grow up to be Superman. I don’t normally want to bring in information not yet revealed in an adaptation, but in this case, the fact is so well-known that ignoring it would feel silly.

The argument for making her non-binary is that she presents ambiguously, and uses language that is not strongly coded male or female. But that could also be explained by the attitude of extreme caution she has developed in her traveling.

There are two moments in the grab-bag episode a couple weeks ago that convince me Kino is female in the author’s mind. The first is when the bandit lookout spots her, and identifies her as a girl when told to look closely. The second is the cooking story. There is a stereotype in anime of girls and women all having cooking skills, but nothing particular about men and boys. It’s not notable if a man can’t cook well. It’s not notable if a non-binary person can’t cook well. But a female person who can’t cook well, that’s supposed to be hilarious in anime land.

All that said, I won’t argue too strenuously with anyone who wants to claim her as non-binary. I know anime doesn’t offer many non-binary characters to choose from, and sure, we don’t have explicit confirmation direct from the author about Kino’s gender. But I’m feeling fairly confident in my bet.

Before Batman, there was Gotham. Before Gotham, there was the Gotham Preview.