That fine line between Science Fiction and Horror is commonly blurred when supernatural elements are involved. But the fusion of the genres is must successful when the intervention of fantasy is removed, allowing the imagination to soar more freely with scientific possibilities and establish the necessary depth required for plausibility, a vital component many readers require if they are to invest their time and hard-earned money. 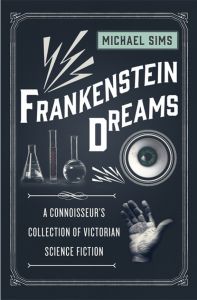 This stance couldn’t be more evident than in what could arguably be considered the story that started it all, Frankenstein. The early work of Mary Shelly lay the foundation for Science Fiction and set the bar for the literary contributions that followed. Thus, Frankenstein Dreams is a fitting title for an anthology stemming from a century of speculative work created by some of the most imaginative legends of the time. Edited by Michael Sims, this book is the fourth volume in Bloomsbury Publishing’s popular series, A Connoisseur’s Collection of Victorian Science Fiction following Dracula’s Guest (2010), The Dead Witness (2011), and The Phantom Coach (2014).

In all, Frankenstein Dreams includes a fine mix of stand alone short stories, excerpts from classic pieces, and non-fiction essays on the science and the fiction that fandom has long embraced. With detailed history behind each contribution and some insight on the editorial consideration of the work, Sims provides some strong evidence on the influence these authors have had on the genre and introduces a few tidbits sure to surprise the hardened fan.

Okay, there is nothing new in century old material. But Frankenstein Dreams: A Connoisseur’s Collection of Victorian Science Fiction is just as much a history lesson as it is a gallery of literary wonder. When brought all together, this masterful collection edited by Michael Sims, along with the previous Bloomsbury Publishing assemblages, turns into a “must have” series for the fan of Victorian era Science Fiction.