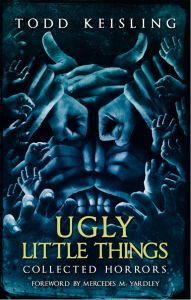 Soon to be released from Crystal Lake Publishing, Ugly Little Things by Todd Keisling (The Final Reconciliation) is anything but ugly. In retrospect, this is a remarkable little collection of stories ranging from dark and twisted to simply disturbing. Some are short quick reads and a couple are on the longer side and more complex. But rest assured, each installment is well crafted and entertaining as hell.

Mercedes M. Yardley (2015 Bram Stoker Award winner for the novelette Little Red Dead) describes Keisling’s work best in the book’s forward with, “There’s a clean elegance to the written word that is so very much at the heart of Todd’s work.” This literary type of beauty shows in each “ugly” little story, which is what makes this collection so appealing.

The collection begins with the eerie tale A Man in You Garden. Reminiscent of Edgar Allan Poe’s cult classic The Tell-Tale Heart, readers are suspicious of the narrator’s sanity from the very beginning. This uncertainty establishes the horror built around a shadowy figure that comes and goes, that terrifying realization that sometimes your mind can play tricks on you, and sometimes not. This was my favorite story of the bunch. Not to diminish the strength of the other works in this collection, but merely to point out my personal affection for tales that remind me of that Poe guy.

The Otherland Express (which first appeared in the 2014 anthology Robbed of Sleep, Vol 1: Stories to Stay Up For ed. by Troy Blackford) is a predictable read with a hero on the run from reality. With archetypal hardships mixed with a mysterious man offering to make everything go away, the story does have a satisfying conclusion that makes it a fitting addition to this collection.

For those interested in a darker piece, the story The Harbinger begins somewhat like a Twilight Zone episode with a reporter stopping by a small town to interview the owner of a popular Doll company. But this is where Keisling takes the gloves off and the story shifts in an unexpected if not macabre direction. The mystery surrounding the town’s mysterious patriarch, the dark lore behind the mining discovery long ago, and the twisted way the horrors continue will leave readers cringing with every turn of the page.

Also in this collection, readers will enjoy:

Show Me Where the Waters Fill Your Grave

Saving Granny from the Devil

The Darkness Between Dead Stars

House of Nettle and Thorn (first appeared in the 2014 anthology Dead Harvest ed. by Mark Parker from Scarlet Galleon Publications)

When Karen Met Her Mountain (first appeared in the 2013 anthology Miseria’s Chorale ed. by David Nell from Forgotten Tomb Press)

Ugly Little Things is actually a lovely little assortment of bizarre tales and horrific adventures from the twisted mind of Todd Keisling that was fun to read. Check them out if you dare. But be warned – they may not be as sweet as candy, but they can be just as addicting.