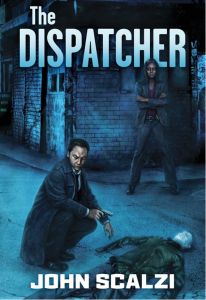 The Dispatcher by award winning author John Scalzi (Old Man’s War, Redshirts) is a short novella originally published as an audiobook from Audiovox (October 4, 2016). The version reviewed here is the printed hard copy from Subterranean Press (May 31, 2017), which also released an eBook version (April 20, 2017). Why so late to the game? I’m embarrassed to say I hadn’t even heard of this book until I saw the physical specimen on the shelf, but after reading it, I’m inclined to snag the audiobook just so I can see (or in this case, listen) to the narration by the talented Zachary Quinto (Heroes, Star Trek).

It turns out, this book is a thought provoking mystery in the guise of a Science Fiction story, or perhaps more accurately, the genre of Urban Fantasy. You might think of it as a murder-mystery seeing how a few people are “killed” along the way (some of which are via the hands of our hero), but in essence, it is more about a missing person and the bizarre motive of the kidnapper.

The story revolves around the realization – if not blind acceptance – that people can no longer die from murder. If you die of natural causes, via an accident, or even suicide, well then, you’re just dead. But if you are lucky enough to be murdered, you mysteriously disappear for a short time. Then, the body regenerates to the state it was in just a few hours before death and reappears, typically at home in bed or some other place they might be most comfortable.

Readers will not be provided any logical or far-fetched explanation for this phenomenon as it remains to be a mystery, even to the characters within the story (what’s up with THAT, Scalzi?). But the bottom line remains that you must be murdered in order to experience this pseudo-immortality. And this is where the “Dispatcher” comes in. A Dispatcher is a “licensed, bonded professional” who is typically contracted out (most commonly through an insurance agency), to humanely send people on their merry way just moments before an inevitable demise with the intention of providing them with a second chance (or third, or fourth, or…).

Bizarre premise aside, the idea does set an interesting stage for a fast-paced mystery when our hero Dispatcher Tony Valdez is coerced by the fervent Detective Nora Langdon to assist in the investigation of fellow Dispatcher James Albert who went missing after performing a “private” dispatch, a contract bordering on what some consider a “legal gray area.”

In typical Scalzi fashion, our hero is charismatic, educated, and a bit snarky at times. But he is competent at his job and easy for the reader to quickly embrace because he cares about what he does. This realistic comfortability helps sell the premise, which in turn provides a stable background for the clues Scalzi sprinkles about, giving readers numerous opportunities to draw on their inner sleuth.

Obviously missing from the audio copy (unless Scalzi has some way to subliminally transmit images via sound) is the handful of interior illustrations by Vincent Chong, who also provided the cover artwork (shown above). The black & white images span from the surreal to the macabre, but they all reflect the dark magic that seems to be at play here.

From audiobook to hardcover print, The Dispatcher is a quick, entertaining read by John Scalzi that will have you anxiously flipping the pages till the end. And though I’m confident Mr. Quinto did a masterful job narrating the audiobook (which I plan to sample as well), this printed version was a blast to read. It’s not a make-or-break deal for my enjoyment of this book, but I’d kinda like to know if Scalzi has a theory for the phenomenon that allows people to live only if they are murdered. Just sayin’.