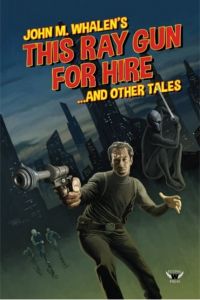 Having the privilege of reading some earlier work by writer John M. Whalen, jumping at the chance to review his latest book was a no-brainer. This Ray Gun for Hire . . . and Other Tales is a fun read available in both print and eBook format which should appeal to fans of the noir pulp fiction westerns as well as those loyal to the classic space sagas.

Like his Mordecai Slate stories in the Hunting Monsters Is My Business book reviewed here at Amazing Stories a couple years back, this is an action-packed collection of stories centered on strong heroes thrown into a slew of unnatural situations. But the comparison ends there.

On the outside, as the title implies, Frank Carson is just another gunslinger looking to make a buck. And at times, you might even get the impression that the character seems willing to forgo the usual scruples most literary heroes are tied down with. But on a more intimate level, the author is letting you in on the secret that there is a lot more to this hero than expected. It turns out that Carson, the champion in most of these stories, is a complex and sometimes surprising hero who brings authenticity and compassion to some otherwise absurd situations.

Face it. Where else are you going to find a collection of short stories following a hired gun, but also including elements like assassinations, ninjas, kidnapping, a “Huma-Form” cellular cloning disguise machine, native territorial reservations, murder mysteries, Dr. Moreau type genetic mutations, pirates, giant insects, and at times, a little compassion? All of these things taking place in the distant future on real and imagined planets throughout the galaxy?

Combined, these elements would be too overwhelming in a single adventure. So, dividing them up into smaller individual stories is the ideal format to showcase such an array of fantastic ideas. This also makes it easier for the busy reader to absorb the complexity in smaller dosages if necessary (though I flew through them in a single sitting). Included are:

This Raygun for Hire (a Frank Carson story)

The Tuqamari (a Frank Carson story)

The plotlines of these pieces may be dime-novel simplistic with a modern speculative twist, but this doesn’t mean that they are poorly written. In fact, this unique combination is what makes these raucous stories quick and enjoyable reads. Sure the action is over the top at times and our heroes rely heavily on the “unbeatable” factor when confronting the enemy (defeating a band of ninjas does make one want to know where Carson learned some of his skills), but the human compassion hidden behind such a willingness to kill does make these characters compelling and well worth the investment.

If you’re looking for a raw comparison, consider the prospect of pulp classic creator Quentin Tarantino writing space opera. The stories are a mixture of western, noir pulps, and classic science fiction. What more could you ask for?

This Ray Gun for Hire . . . and Other Tales by John M. Whalen will keep you turning the pages. It’s also a nice place for new Whalen fans to start.