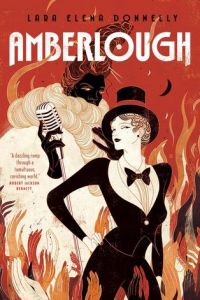 You know what has become cliche recently with book reviews? Saying you should read a book because of the current political climate. I’m not sure if reviewers are going out of their way to find these books or whether publishers feel this is what sells now, but I’ve seen way too many reviews recommend a book just for that reason. Having committed this sin myself in the past, I promise to try and recommend a book for reasons besides politics. That said, Amberlough by Lara Elena Donnelly is a perfect novel to read for these divisive political times…damn it.

Amberlough is set in Amberlough City in the state of Amberlough (obviously the founders of Amberlough weren’t a creative bunch) one of the four states that make up the federation known as Gedda. Our three point of view characters are Cyril DePaul, a wealthy socialite and spy, his lover Aristide Makricosta, a smuggler and cabaret singer, and Cordelia Lehane, a dancer at the same cabaret Aristide works at and drug seller. From these three characters’ perspectives we watch as the One State Party, or Ospies, come to power in Gedda turning the liberal federation into a one-party, conservative state that comes down hard on anyone who doesn’t fit their dream for a perfect society.

At its heart, Amberlough is a pessimistic historical fantasy. Although Gedda looks like no place on our Earth, the culture and politics of the country strongly resemble that of Wiemar Germany, while Amberlough City reminds me of a mix between Paris and New York. Meanwhile, the Ospies, if you couldn’t guess already, are the book’s Nazis and their rise to power sort of parallels what happened in 1930s Germany, except without the defeat in a world war or a horrible economic depression…which makes you wonder how this group became so popular in the first place. Granted there are references to a religious movement motivating people to vote for the Ospies, a strong economic desire to encourage people to buy Gedda products and allegations of massive voter fraud, so perhaps that is a sufficient enough explanation for their rise to power.

Quick comment on geography: one of the other states of Gedda, Tatie, has an ongoing border conflict with neighboring Tzieta, which parallels Germany’s dispute with Poland over Danzig and the Polish Corridor. Throughout the book Tatie is described as being landlocked, but on the map that comes with the book, Tatie clearly has access to the sea. So either I missed something about Tatie’s coast being miles of unscaleable cliffs or there was definitely a miscommunication between author and illustrator.

Now on to what I liked about Amberlough. It is well-written with original slang and believable dialogue among characters. The world-building is also great. Gedda comes off as a unique nation-state that is still recognizable thanks to the examples Donnelly pulls from our own history. I especially liked how none of the characters are the walking talking cliches you usually find in dystopias. Cyril, Aristide and Cordelia oppose the Opsies, but they can also be cowardly, they can cheat on their significant others, they can bribe cops, sell drugs, etc. Supporters of the Opsies aren’t just cookie-cutter racist Nazis either. One of the first Opsies we are introduced to just wants to clean up the corrupt police…and there is nothing wrong with a goal like that on its face.

Granted the Opsies want to do some horrible things when they come to power, like expel a Gypsy-esque ethnic group, force women out of the work force and persecute homosexuals, but I think Donnelly did a good job highlighting the gray morality of the WWII era. Yeah the Nazis and the other Axis powers were terrible…but so was Stalin’s Soviet Union and they were America’s ally in the war. Let’s not also forget some of the questionable things America did during the war, like the Japanese internment camps, and Britain didn’t exactly have a perfect track record when it came to treating the native populations of its colonies with respect and dignity. It just goes to show you that when it comes to war and politics, no one is completely squeaky clean, and I am glad Donnelly recognized this.

So with all of that said, what didn’t I like about Amberlough? Well the book is definitely a slow burn with things not picking up until the last third. It relies heavily on dialogue rather than action, so if you like fight scenes or epic battles, this is probably not the book for you, but if you are into spy thrillers then I can recommend it. Of course, if I had to be brutally honest, I do find myself a part of the former group. I am a more action-oriented reader who enjoys a little escapism and thus I found the melancholy tones of the book to be kind of a downer. I still think it’s a good book and I am happy I read it. Lovers of interwar European history (or people who are very interested in current events) can get a lot of enjoyment out of Amberlough, it just wasn’t for me.

Nevertheless, if you want reminder of a forgotten era of history overshadowed by the horrors that came afterward, give Amberlough a try.