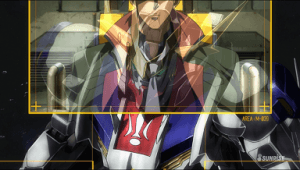 Mobile Suit Gundam: Iron-Blooded Orphans #42 – Jasley finally has Tekkadan right where he wants them in a no-holds-barred, knock-down drag-out space battle. He throws his own child soldiers into the front lines, forcing Tekkadan to essentially fight their own, as Zack points out. The mech pilots are very pragmatic about it — yeah, it sucks, but what can they do right now other than fight to survive?

The one teensy little fly in the victory ointment is that not everyone else is right where Jasley wants them. McMurdo Barriston, who is about as smart as you would expect a guy who has survived into old age in a literally cutthroat business would be, has figured out what Jasley is up to and called in a favor of his own to get Iok pulled out of action.

Iok and Rustal are about to have bigger distractions anyway, with other parts of Gjallarhorn now trying to foment a revolution. McGillis’s assistant is serving as the public face of the rebellion, which means McGillis himself will be acting the part of peacemaker who enacts the reforms the rebels demand.

This will shortly put Tekkadan up against Iok, Rustal, Julieta, and Vidar, now that Tekkadan has no conflicting tie to Teiwaz. Orga thinks the path is straight and clear to Tekkadan becoming part of the new Gjallarhorn order, but McGillis probably isn’t planning to have it survive that long. 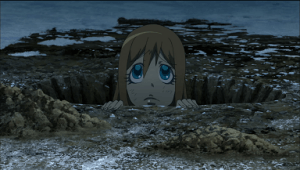 Saga of Tanya the Evil #5 – Viktoriya does turn out to be the highly efficient aide-de-camp Tanya wasn’t looking for, and soon the experimental mage battalion is being assembled. But Tanya has reached a high enough rank now to find other ways to amuse herself. Given a mere month to improve her soldiers, she takes their training to the extreme and clearly enjoys every moment of it.

Alternate fantasy Romania has decided it wants to join the fun by launching a surprise attack on a previously quiet border. Dakia’s army still fights like it’s the late 1800s, however, and the mages slaughter them by the thousands. (My military history expert says this isn’t too different from how actual Romania fared in actual WWI.)

For an encore, Tanya rules/lawyers her way all the way to the Dakian capital for one last attack with maximum collateral damage. But she still kicks it off with a devout prayer to the Supreme Being. Is piousness enough, or is she heading for a lecture about using her power for good? 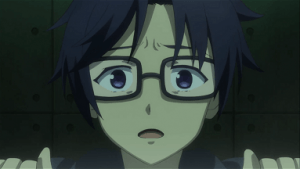 CHAOS;CHILD #4 – Three teenagers sneak into a closed hospital and head for the basement to try to find their way to an abandoned high-security psychiatric ward, because that always goes well. It’s the same hospital we saw in the recap of Chaos;Head where Takumi went for some kind of treatment, but both people he had contact with there were apparently killed.

Takuru and Onoe also have a history there, as Takuru suddenly recalls. It appears they were part of a research program into people who had the potential for paranormal powers. Really important question: Was that before or after the strange light in Shibuya? Takuru looks more than six years younger in the flashback, so I’m thinking before.

The one concrete result of the research, aside from a whole bunch of permanently disordered mental patients, was the basis for the Sumo Stickers. Perhaps the stickers at the murder sites could have been used to unbalance the powers of the murder victims. And the “holy barrier” Kurusu disturbed might be intended as an anti-psychic zone. 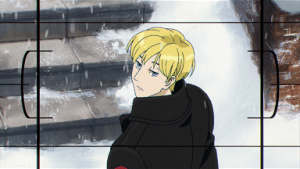 ACCA: 13-Territory Inspection Dept. #5 – Prince Schwann is getting impatient for his new girlfriend to be procured for him, but everyone he sends to Bādon is seduced by its decadent specialty foods. Jean is dispatched to the frozen north (or south), where he finds Waldo and gets lectured about how the simple folk of Birra are true to their rustic fare but not above accepting subsidies to keep their economy on par with other districts. In addition to being generally restive about federal control, the individual districts are suspicious of each other, it seems.

A few careless-on-purpose words from Lilium kick Jean in the direction of a major revelation: that Nino is spying on him for two different entities. Grossular only started in the past month, after becoming concerned that Jean was involved in the coup plot. The other is the one that’s been watching him his whole life.

Grossular didn’t know Jean was already under surveillance. That means the other entity is outside ACCA and all it audits. I’m leaning pretty strongly now toward Jean being part of the royal family and unaware of it.

So is Lotta really his sister, then? And if so, how awkward does this make things for Schwann when he finds out? There’s not just the whole dating-your-relative thing; there’s also the fact that this probably makes Jean and Schwann rivals for the throne.