In this week’s viewing: Izetta destroys a ship, Cheating Craft blows up the whole concept of narrative, and more! 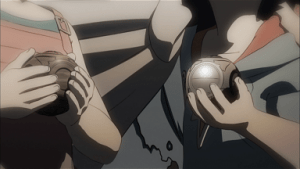 BBK/BRNK #19 – Through narrative trickery, Azuma has enough time to hitch a ride from Guy all the way to the fortress and still arrive in the middle of the previous episode. He arrives just in time to wish he hadn’t, as it gives Kaoruko a chance to unload everything she’s been carrying since they left Treasure Island together.

Azuma was the chosen heir who inherited the heart of Ōbu; Kaoruko got a cheap wooden imitation. Azuma got to spend ten years adventuring with their dad; Kaoruko was abandoned in Taiwan to become Guy’s puppet. Furthermore, she is sick of all the patriarchal patronizing about how she has to be protected because she is a girl.

And all Azuma can do in response is feebly protest that actually their parents totally liked her, and insist that she take back the thing that symbolizes her non-inheritance. Take a tip from Arabashiri, dude, and get her something she actually wants.

Now we know how Zampaza is able to work without a crew: Guy has put together a device fooling it into thinking they’re present. You may think there could be less messy choices than whole units of blood, but in Japanese idiom, blood carries the essential qualities of a person and their personality, so that’s probably why it’s being used there. 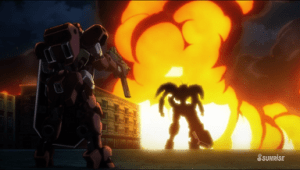 Mobile Suit Gundam: Iron-Blooded Orphans #32 – Yes, Fareed is smart enough to realize the Earth Branch is being fooled, but unfortunately not smart enough to find some magical way to defend himself without using deadly force. For that and other losses, Tekkadan is still ready to execute its enemies.

Both of the ones they can read commit a fatal mistake by trying to talk down to child soldiers. Radice tries to justify his existence by claiming he was trying to spare Takaki the hard part, but Takaki proves that he is willing to make a hard choice. Mossa goes with a bit more dignity, but feels a need to go on and on about morality and innocence and hey quit interrupting the lecture you damn punk! It brings to mind the moment last season when Carta Issue’s fleet couldn’t pose and say their motto before getting shot out of formation. This show is not kind to antagonists who want to monologue, and that’s a good thing.

Mossa is competent enough to destroy the evidence, so no one knows for sure who hired him. But again, Fareed is a smart guy, and he’s got to at least have suspicions that Rustal is behind it. 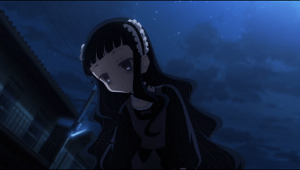 So she wasn’t looking for a fight at all. Either Snow White has herself a creepy fangirl, or Fav thought it would put on a better show if Snow White had help.

Meanwhile, Ripple gets a flashback, and it now seems like a cruel joke that her magical girl outfit means she’s dressed to be called a slut. Magicaloid 44’s flashback indicated that the players got to pick the appearance of their characters in the video game; perhaps Ripple chose that in a moment of self-loathing.

Izetta: The Last Witch #7 – Someone on the animation staff is going to be real tired of drawing stunned expressions by the end of this show.

In Britannia, Finé and Izetta drop in on a conference between Alternate Winston Churchill, representatives of conquered countries, and ambassadors from the US of A and the newly introduced country of Louisiana. Viewers in the US may immediately think this is a timeline where the Civil War ended differently, but I believe this Louisiana is Alternate Canada. The anime world thinks of Canada as entirely French, and if you recall that the name Louisiana once meant French-controlled territory extending much further north than the present state, then it makes some kind of sense.

The rest of the episode is constructed around WWII references real and fictional. Notably, the 633rd squadron takes its name from a the heroes of a fictionalized pastiche of actual RAF operations during the war. And the Drachenfels is basically the Graf Zeppelin, which did in fact turn out to be largely useless to Germany and was captured and sunk by the Soviets. 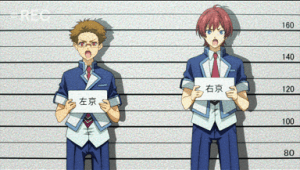 Cheating Craft #6 – I don’t know what to make of this episode. Maybe this is in the source material. Maybe this was a filler episode trying to be more entertaining that the clip show which one usually gets in filler episodes. (If that’s the case, then it succeeded.) Maybe the director was called away on urgent business at a critical time and told the key animators that they could each do whatever they wanted with the characters for a minute or two.

At least we found out the name of the mysterious guy from the pen shop. And next week’s title suggests a return to wacky extreme testing, so probably this was a filler episode. I wish I could be more certain.

In the 1970s, we lived in Vienna for five wonderful years. I loved it, but all my experiences fall into one mental time frame, and I have trouble remembering what came first. So, I know that I was reading whatever was on my parents’ shelves, including a lot of Gogol, Dickens, and, for reasons known […]

AMAZING Things Amazing Stories Will Be Giving Away