In this week’s viewing: Kemono Michi bows out, and three more shows are going to the end of the year. 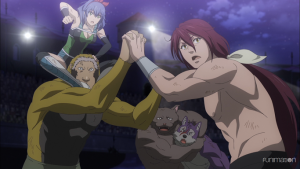 Kemono Michi: Rise Up finale – Genzō and MAO are finally given a chance to talk, heart-to-heart, and iron out their misunderstandings. Which happens to be during an epic session of slamming each other into the mat for the entertainment of all.

In the finest pay-per-view tradition, the action spills out of the ring and turns into a general melee in the locker room and the stands. In a less fine tradition, everything is reset so that the story can happen all over again. The erstwhile Dark Lord gets a respite to take a new shape and grow again; Genzō is broke and back to monster hunting to try to finance the pet shop; Shigure is still obsessed with money; Carmilla is still obnoxious; Wolfgang is still the butt of a mean-spirited joke.

It’s a conclusion which showcases both the biggest strengths and the biggest weaknesses of Kemono Michi. On balance, this is not one I’ll enthusiastically recommend in the future. It’s more one about which to say sadly, “It had some great moments, but…” 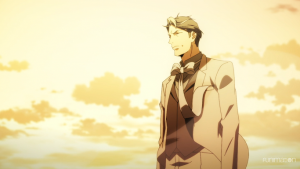 Special 7: Special Crime Investigation Unit #11 – Warlock finally comes for Kiryūin, and they engage in some cathartic trash talk and zapping which clarifies what has been hinted for some time: Kiryūin is one of the ancient dragons, who has renounced the accumulation of power for its own sake. Meanwhile, Warlock’s inattention allows Nijō to pry Mizuma loose from his control, at least for a time.

The most interesting detail revealed about the dragons here is that quality of worshippers counts as much as quantity. Kiryūin is still more powerful than Warlock thanks to his small-batch, artisanal, minimally processed cultists, as opposed to all that mass market crap Warlock has been feeding on.

But the other thing we learn is crucially important, given this show’s obsession with numbers. “Nine” refers to the nine heads of the most ancient dragon. Kiryūin and Warlock are two of them, leaving seven more. With Mizuma back on side, Kiryūin now has seven people coming to join him in the fight. Seiji might not be the only one with extra powers by the end of this story. 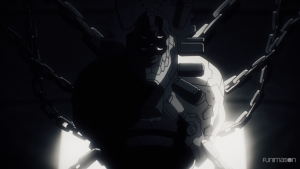 No Guns Life #11 – Inui’s latest clash of the agents of Berühren ends in a draw, thanks to the appearance of Tetsurō. This buys everyone some time to think, and consider the implications of Harmony, and for Inui to take a curious new case involving a haunting.

While Inui doesn’t vocalize what he’s thinking as he sits and smokes and watches Tetsurō, the cascade of words and images gets the general idea across. He recalls when he last had a partner, who was a decent guy within the context of the war. He knows that he’s designed to work better with a teammate. And Tetsurō is maybe, just maybe, the sort of person he could trust enough to work with.

But Tetsurō is also the harbinger of Berühren’s plans. It’s confirmed by Mary that the burns were the result of Harmony allowing Tetsurō to share in what happened to the Extended he was controlling. So there’s the plan: get everyone converted to Extended, then use Harmony to produce utopia. Much the same way as the board of directors has already formed a linked consciousness, everyone will be forced into a kind of empathy. That can only improve things, right? (Spoiler: go check out the last story in The Cyberiad.) 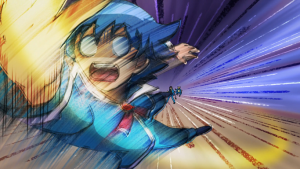 Welcome to Demon School! Iruma-kun #12 – The Battlers are indeed the school clubs, and just like the school clubs, there is a strong expectation that everyone will pick one and stick with it. Iruma is pulled this way and that— literally— but fate seems to insist on nudging him toward the magical maker club. Plus, the club president is already featured on the show visual, if you check the Crunchyroll page…

The maker club has a couple of attractions for Iruma (so to speak). One is that he might learn more about his magic ring and how to control it. But the other is that the club isn’t just for futzing about randomly; the president has a clear vision of trying to use gadgetry to help out less-abled demons. Doing good for others would certainly appeal to him.

Yes, this could just turn into a stew of horrible ableist tropes. But it hasn’t yet, so let’s see where this goes.

The BlackSci-Fi.com Online Campaign Corner/ The Astronauts Chosen: Changing of The Guard