Home Science If Space Doesn’t Work This Way, Try With the Death Star

Following on last week’s post – Star Wars and Space Problems – I want to discuss here an (already announced) topic: the infamous Death Star. For reasons I don’t fully comprehend, this one seemed to have attracted a fair share of interest, more than the average SF creations. The lack of credibility is only a marginal aspect, or so it seems. 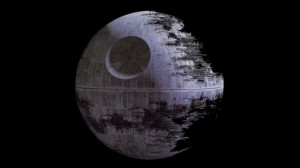 Let’s start with some obvious observations. According to the well-known, already discussed principle that SF people have no sense of scale, it is easy to notice that, if the Death Star was actually so huge to be mistaken for a moon, the rescue of Princess Leia makes no sense at all. I haven’t done the maths here, but the odds of Luke locating Leia’s prison look slim indeed (maybe this is a secondary effect of the Force: it works better than a GPS).  More worrying appears the orbit of the Death Star. Isn’t it too low for a stable one? If we assume, as it’s commonly done, an Earth-size Endor, this configuration violates all rules of astrophysics and beyond. And, last but not the least, why in hell should we even be thinking of building such a massive starship, given its cost? This aspect is the most debated one, and a few calculations exist about how expensive it would be. Unsurprisingly, everybody came out with a different figure. The highest I was able to find out is a staggering 15,602,022,489,829,821,422,840,226.94 USD, “1.4 trillion times the US debt and 124 trillion years of war in Iraq” (I quote). As if this were not enough, these few bucks “only get you the very basic model of Death Star, no options, no GPS, no radio, no leather heated seats, no mega-laser to obliterate planets, no turbolaser towers, no computer systems, no miscellaneous life support systems, no crew quarters, no turbo-elevators, no energy generators, no showers, no air conditioning, no Darth Vader’s jacuzzi, no Emperor’s home theater system, and no bloody canteen.” I don’t feel encouraged. 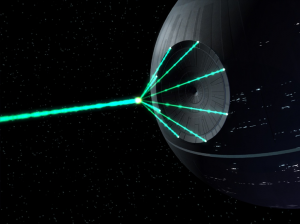 Others tried to cost it in a more realistic way. Some economists from Lehigh University, Pennsylvania proposed the more modest, but still impressive, 852 quadrillion USD (yes, fifteen zero). It amounts anyway at many, many times the world’s GDP (around 13,000 in 2012). But even this estimate has been criticised as an unrealistic one. Why? Because the Death Star figured out in this case is a sort of oversized battleship, no more no less. In a detailed and well-argued article, Randi Simberg has observed that using a real battleship as a reference is not going to work. For a start, a Death Star is not a “floating” ship, it’s an orbiting one. Furthermore, space vessels are not made of steel (like the battleships) but of other materials (aluminium, carbon composites, titanium, just to mention few). Simberg has not come out with his own estimate. But he makes a good point when affirming “the absurdity of attempting to predict future costs on the basis of existing technology. The ability to construct an artifact like a death star implies a vast off-planet industrial civilization, one that is utilizing all of the material and energy resources of the solar system, and perhaps doing most of the major manufacturing off planet, lowering the environmental burden on the home planet.” So, no Death Star in the near future? You never know.

In November 2012 34,435 people have actually petitioned the White House to actually start building one, in a XXI century version of the Keynesian New Deal.  It sounds like this: “Secure resources and funding, and begin construction of a Death Star by 2016. Those who sign here petition the United States government to secure funding and resources, and begin construction on a Death Star by 2016.By focusing our defense resources into a space-superiority platform and weapon system such as a Death Star, the government can spur job creation in the fields of construction, engineering, space exploration, and more, and strengthen our national defense.” 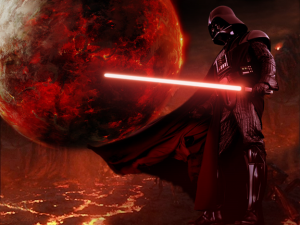 There’s no need to worry, however. The Obama Administration has replied declaring that a Death Star isn’t on the next budget, for a series of reasons. Cost is the most important one (“We’re working hard to reduce the deficit, not expand it”). Ideological motivations do play an important role (“The Administration does not support blowing up planets”). But technical issues enter in the evaluation too (“Why would we spend countless taxpayer dollars on a Death Star with a fundamental flaw that can be exploited by a one-man starship?”). I can’t but agree.