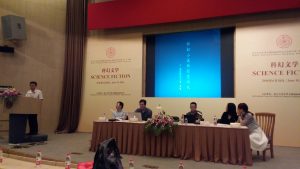 Oddly, the sex and killing are incidental. In the end, it’s about the main character becoming human despite having been shaped as a weapon