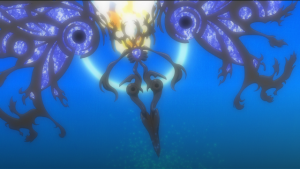 Otherside Picnic #4 – When Sorao tries to suggest that maybe the Otherside is too terrifying to keep exploring, she winds up driving Toriko away. The Otherside itself comes looking for her, though, first in the form of a mysterious man and then as a group of ersatz neighbors who somehow pull her and Kozakura back in.

The big question Otherside Picnic now starts to tackle is, is there intelligent life in the alternate reality. Toriko, when enthralled, seems to say yes, but it is so alien that it can only communicate through that most primal emotions, fear. On the other hand, the people who suddenly showed up at Kozakura’s door were able to use language and behave more or less like humans for a short time, so either the mysterious sentience is working with humans or it is slowly learning to communicate on a more sophisticated level.

When Toriko is freed from the grip of whatever the hell that was, she realizes that she was not speaking to Satsuki. But what if that was Satsuki? If some intelligent creatures of the Otherside are able to take on the form of a middle-aged man to give warnings or annoying neighbors to trap the unwary, why not a young woman to hang out wth humans? 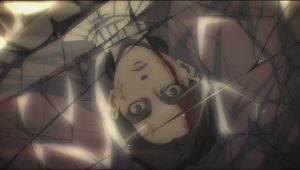 Attack on Titan #66 – The battle is almost fully joined as the delayed Titans show up to try to save the War Hammer’s operator. Meanwhile, Armin demonstrates why he isn’t fighting in the city by managing to blow up everything in the harbor. That just leaves Reiner, deperately trying to not be forced into choosing which of his friends to kill.

Even though Eren is fully back in the story, it still feels like Reiner is the protagonist now. With the power of three Titans now, Eren is becoming more and more a sheer force of nature. Reiner is the one trapped between empathy for his old comrades in the Survey Corps, loyalty to his country, and wanting to protect his family.

The last is what seems to win out, just as Gabi and Falco were Reiner’s reason for not killing himself before. So the Armored Titan finally puts in an appearance, though you get the impression Reiner might just settle for making it look like he drove Eren off. 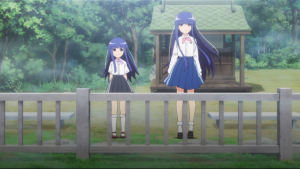 Higurashi: When They Cry – GOU #16 – Rika wakes up in Hinamizawa once more to discover that if there is one thing worse than being disembowelled, it’s being disembowelled very slowly because the person doing it keeps wanting to stop and monologue at you. Under extreme duress (from the disembowelling) (well also maybe from the monologuing), Rika is willing to agree that it’s all her fault for ever trying to leave town and make something of herself.

In a way, Rika has fulfilled her pledge to give up after another five loops. Just instead of killing herself with the magic sword, she’s agreed to be trapped in Hinamizawa forever. Unless she was just saying that in the hope of lulling the local powers into complacency until she can sneak over to where the sword is again.

There is a lot of information in that awful conversation, though. Like the fact that there is some kind of endemic local disease which makes people think Oyashiro is telling them to kill people. And Satoko is being treated at the sketchy local clinic, although apparently not very well considering what she did. The same clinic where Nurse Tarano, who now appears to have been important to the lifting of the curse, works. And now Tarano wants a word with Rika. No wonder Rika has that look on her face. 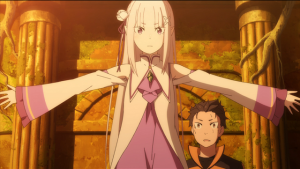 Re:ZERO -Starting Life in Another World- #41 – After fumbling his way to restoring Emilia’s confidence, the next obstacle Subaru faces is Garfiel. Or, more specifically, Garfiel’s own childhood trauma which has kept him from passing the first trial to remove the barrier at the Sanctuary.

This one is a group effort, with a big assist from Ram almost sorta kinda admitting that she reciprocates Garfiel’s feelings for her. But also from Emilia, who really does seem to have gotten over whatever it is she’s facing and is ready to embrace her full identity.

Under this combined attack, Garfiel is finally ready to admit that maybe his mother did love him, and accept that sometimes tragedy happens but it shouldn’t keep him from trying to keep everyone trapped. We also learn in passing that he’s younger than he looks.

Subaru’s reaction to that news does literally mean “you’re an eighth-grader”, but the full meaning is not so much “wow, you’re young” as “wow, you’re a pathetic nerd”. Chūni colloquially means a person in the throes of chūnibyō, or “eighth-grade syndrome”, which is a where a person with delusions of grandeur and high exposure to geek culture invents a magical or superheroic identity to convince themselves that they are super-special. 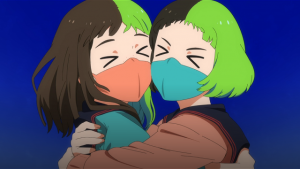 Wonder Egg Priority #3 – There is something about Ai that says “follow me home and invite yourself into my life”, because her latest comrade-in-arms does just that. Kawai Rika follows in Koito’s footsteps by getting very familiar with Ai very quickly. Sleeping in the same room unlocks the new power of synchronization! But it also means that Ai has to live in Rika’s world for a while, in a very literal sense.

In an anime about the struggles of teenage girls, I guess an episode about pop idols and creepy stalker fans was inevitable. Wonder Egg Priority rises above the tropes a little by including an idol who was horrible to her fan, though. And with that, it begins to shed a little more light on what brings the girls into the dream world.

Both Ai and Rika are fighting to restore other girls who committed suicide. But they both also feel responsible for the suicides in some way. In Rika’s case, it was very straightforward: she rejected Chiemi. In Ai’s case, there was some kind of falling out, but it’s not clear if Ai thinks she directly harmed Koito.

We do know now that the school counselor was somehow involved in it, explaining why Ai has so little interest in talking to him about it. The bullying, the guilt, and the shock of Koito’s death would be hard enough for any kid to talk about, but the counselor is part of why Ai is going through what she’s going through. Her mother probably has no idea, just as she has no idea why Ai keeps getting injured or is suddenly making new friends.

Amazing Histories, June 1928: Beyond the Visible