A review of the ‘sequel’ to The Company They Keep, the Inklings and creative collaboration. 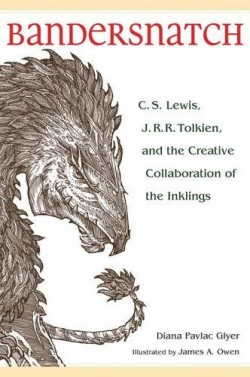 Bandersnatch:  C. S. Lewis, J.R.R. Tolkein, and the Creative Collaboration of the Inklings is an entertaining and thought-provoking somewhat-sequel to Diana Pavlac Glyer’s award winning The Company They Keep, the work that challenged C.S. Lewis’ statement “that one doesn’t influence Tolkien, one “might as well try to influence a bandersnatch!””.  Prior to Dr. Glyer’s decades long immersion and research into the Inklings, the only known way to influence a Bandersnatch was with an oversized elephant gun (thank you Larry Niven).

Dr. Glyer has proven that there are alternative methods.

The Inklings were perhaps the world’s most renowned group of English writers. “Properly speaking,the Inklings was neither a club nor a literary society, though it partook of the nature of both. There were no rules, officers, agendas, or formal elections.” – Warren Lewis, Inkling and brother of C.S. Lewis.

It was apparently common academic knowledge that C.S. Lewis’ statement was sacrosanct.  The author of the Narnia series and the Ransom trilogy (Out of the Silent Planet, That Hideous Strength, Perelandra) said you couldn’t influence Tolkein and therefore no similarities of thought, style, purpose, could ever possibly have leaked between the two.

Glyer rightfully questions this assumption, most likely basing her initial hypothesis on the radical idea that a near dozen men of letters, each of whom read their latest to each other, solicited critique from each other and penned each other voluminous letters of commentary, couldn’t help but influence each other’s works.

As it turns out, there’s quite a bit of Lewis in Tolkein and a near equal bit of Tolkein in Lewis.

The Company They Keep more than supports (with academic veracity) the idea that what C.S. Lewis was saying was not that other members of the Inklings didn’t have an impact on Tolkein’s Ring, but that Tolkein wasn’t influenced.  If he liked an idea, he heartily made it his own and if he didn’t like it,  it was as if the comment had never been made.  Once the serial numbers have been filed off, the work stands as a whole.  But it’s not as if the serial numbers were never there.

Glyer uses The Company They Keep as the launching point for a less academic and more accessible presentation of the Inklings.  The background and works of a handful of prominent Inklings are detailed.  Threaded throughout are demonstrations of the influence that each author had over the others, with particular attention paid to Lewis’ contributions to The Lord of the Rings and Tolkein’s influences over Lewis’, particularly the Chronicles of Narnia.

Layered over a fascinating discourse on the history of fantasy’s Christian Apologist wing, is a treatise on methods of creative collaboration.

Using the Inkling’s own correspondence, notes and edits, as well as interviews with surviving Inklings, Glyer illustrates how the group formed and fell into a critical-collaborative methodology that allowed them to fiercely critique each other’s work and yet remain friends;  perhaps more importantly, receive each other’s comments, edits and suggestions as positive input to a creative whole.

Each chapter of Bandersnatch is set off with an illustration by James A. Owen (using a somewhat HIrschfieldian trick of ‘hiding’ the Bandersnatch in each) and a call-out titled DOING WHAT THEY DID – a summation of the collaborative lessons revealed in the chapter.

The concluding section of the book offers guidelines, in detail, for those who wish to form their own reading group and avail themselves of the successful techniques undeliberately created by the Inklings.

Bandersnatch will serve equally well for those wishing to delve into the roots of some of fantasy’s seminal classics, as valuable instruction for those forming reading/critiquing groups and as a prelude to the more detailed and academic The Company They Keep.  Bandersnatch is a quick read (no need for vorpal swords), entertaining and informative.  Highly recommended for anyone who wants to keep their fantasy creds up-to-date.