In this week’s viewing: Odd Taxi forms more connections, Mars Red explains what certain people are really up to, and more! 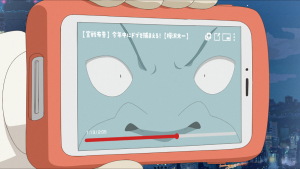 ODDTAXI #5 – As Odokawa spends an evening ferrying around a manager and parts of an idol group, and Kakihana flails his way through a date whch is a bad idea in every possible way, the threads really start to come together to form… what?

First, we get a lot of things confirmed. Kakihana’s online paramour is in fact one of the idol girls. Shirazawa is stealing drugs and Dobu is her black-market contact. And the missing girl definitely has a connection to Yamamoto, the idol group’s manager.

It’s Yamamoto’s turn for a close-up study this episode, and he’s very different from showbiz managers as usually depicted in anime. Either they’re upbeat and kind of useless, or they’re tyrants and creeps. Yamamoto is focused on the business value of his talent, but he’s also competent at dealing with them and generally the kind of person they seem safe to be around. For now, anyway.

Recall that Yamamoto was already given Odokawa’s name a few episodes ago. It’s not a coincidence that he needed to take an extended ride in that specific cab. And he never lets on exactly why, but Odokawa puts the pieces together after finding out where Yamamoto’s office is and Yamamoto becomes very interested in his dashcam footage.

Meanwhile, more connections are forming: Tanaka knows the other backup idol singer well enough to convince her to plant a phone as a tracking device. Kabasawa finally gets his chance at online fame by trying to whip up a mob to go after Dobu. And Kakihana took out a short-term loan to finance his fancy dinner. From the preview it looks like he may wind up in hock to the mob. Perhaps this is where we meet the mysterious Yano. 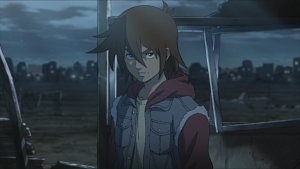 Megalobox 2: Nomad #5 – Joe goes back home, insofar as he’s ever had one, to discover it really is no more. Which is kind of to be expected, given that one of the adults holding it together died, the other ran away, and then the previously mentioned super-typhoon smashed what was left. Now his found family is scattered, and the members he can find just want him to go away again and leave them in peace.

Most of this episode is dedicated to filling in the context for Joe’s feelings of guilt. When Nambu got his terminal prognosis, he decided to go peacefully and enjoy the time he had left. Sachio had a tough time accepting it, but it was Joe who ultimately retreated into delusion. He returned to megaloboxing because it was the one thing he knew how to do, and convinced himself that he was doing it for his friend. It doesn’t really matter whether he won the exhibition match or not, the mistake was not being there for Nambu.

And yet, after feeling betrayed by what Joe did, Sachio has somehow followed him into a life of underground boxing. Sachio, though, is clearly no good at it. If he was just training so he could be ready beat Joe up if he ever saw him again, Sachio’s had his chance now, but that doesn’t seem to be enough. Does he think he can face Joe in the ring someday?

Mars Red #5 – Maeda is only down with exhaustion, so while he rests up in the hospital, Code Zero heads into Yokohama to clear out a nest of vampires. Only Maeda is not in the hospital, someone else has already taken the ringleaders out, and for the biggest surprise, they aren’t actually Nakajima’s real vampire military unit.

Takeuchi described Ascra a little while ago as the vampirism-causing agent but poisoned. Rufus Glenn has apparently been able to dial up the poison far enough to kill high-level vampires (or put them into some kind of stasis). So now the technology exists to artificially create vampires, amp up their aggression, and put them down again if they overdo it. And Glenn is sharing it with Nakajima, so that Nakajima can go to his superiors and say look, we don’t need those fancy imported English vampires, Japan can produce its own.

The conspirators’ main obstacle now is DeFrott, who sounds open to working with Maeda, and even has a plausible-sounding explanation as to how Misaki’s accident wasn’t his fault, he just wanted to give her some extra time to wrap up her business on earth.

But a larger problem looms for everyone. Mars Red makes a point of letting us know that it’s the late summer of 1923. If its timeline resembles ours at all, Tokyo is scheduled for a monumental earthquake on September 1st. In the aftermath of the quake, Japan will turn more militaristic and xenophobic, boosting people like Nakajima. 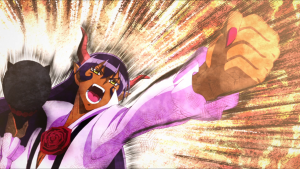 Welcome to Demon School! Iruma-kun season 2 #3 – While the student council desperately tries to hold things together, they also try to get to the bottom of what’s happened to Ameri. It’s clear that someone cast a spell on her with malicious intent, and there is one obvious suspect. A very, very obvious suspect.

Romove Romiere, the handsy, hip-waggling, homophobic head of the Disciplinary Club, has been after Ameri’s job since forever and has no compunction about going for it the moment she’s been weakened. Does he care if suspicion falls on him? Apparently not, as the upcoming election doesn’t seem to have any rules banning this sort of thing.

Bablys, then, is heading for an electoral contest between a loud creep and a usually strong and competent girl who’s been sidelined by a dirty trick. The one slim hope is that the spell on Ameri should wear off if the council tries to keep her on her daily routine. But according to Alicred, something’s holding up the unraveling of the spell. Something that Iruma’s going to have to fix, probably at the cost of yet another deeply embarassing misunderstanding. 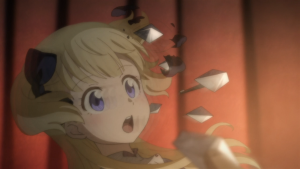 Shadows House #4 – Emilico manages to annoy a powerful doll enough to be assigned to a grueling nightly search for the source of last week’s phantom. But thanks to her unshakeable optimism, she makes a couple new friends and learns a little more about the workings of the house.

The explanation for the phantom turns out to be mundane, or relatively so as things in this setting go. Soot leaked out of a pipe, and became semi-sentient just on its own. Nobody deliberately set it on people. That backs up the reasons Emilico’s been given for why the house needs to be properly cleaned on an ongoing basis.

On the other hand, the deadly trap in the front hall doesn’t necessarily mean that no one ever gets to leave, just that they’re not supposed to sneak out the front door in the middle of the night. It does seem to be aimed at people leaving, not arriving, though.

Tanya Tynjala gives a rundown of article that appeared on the Amazing Stories Web site in June for Spanish readers.