I was on the hook for an editorial subject for today (it’s been a little tough concentrating these days given our personal circumstance), so I hopped on over to File 770 to peruse the daily Pixel Scroll. I can usually find something over there upsetting or bothersome enough to get the juices flowing.

No such luck, I thought, even AFTER reading the comments. (What’s up Mike? I can almost always pull an editorial subject out of the File, either from the entries, the commentary, visiting the linked posts/pages/sites or, at last resort, the comments on the linked to items for some Fourth Level Upset).

But no. Nothing. I could write about the Presidential election (but I’m already doing that elsewhere: for a sample, take a gander at Br’er Rabbit for President), but that’s relatively off topic for Amazing Stories (hence – writing about it elsewhere).

I checked File 770 for the fifth time and still no inspiration. 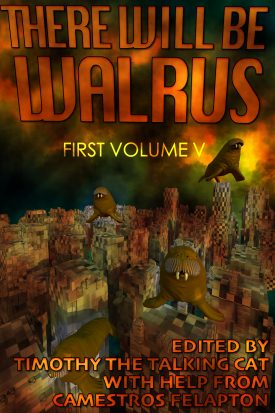 Until I downloaded the free e-book THERE WILL BE WALRUS First Volume V  edited by Timothy the Talking Cat and Camestros Felapton (incidentally, there are over a thousand anagrams for that name, many of which feature the word Spacemen, such as A Spacemen Lofts Rot.  Which sounds like something that might happen on a generation ship….) and I realized that this is the latest example of a new sub-genre aborning.

Last year we had John Scalzi Is Not A Very Popular Author And I Myself Am Quite Popular: How SJWs Always Lie About Our Comparative Popularity Levels by Theophilus Pratt and Alexandra Erin. 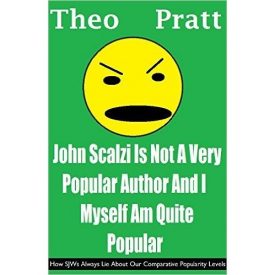 Puppies were upset by “message fiction”, SF works that they felt were too encumbered by metaphor and commentary on reality that were far too preachy with the added insult and umbrage of not falling into line with their bent view of the world.

Science Fiction written with an OVERT message, taking a take on a micro-political niche and excoriating it with appropriately bad prose.

Lets give it it’s due and call this new sub-genre Puppy SF.  Pupsif for short.  It’s located on the hierarchy somewhere near skiffy.

Anyone else wondering how long it will be before the Pupsf Awards are announced?