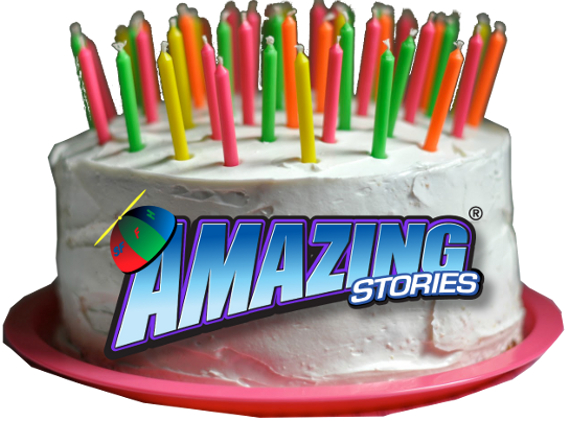 Today’s only missive from Amazing Stories heralds a change to our regular weekly line up, presages some additional changes of some import, serves as a somewhat state of the union address and introduces our (new) editorial policy.  Seeing as how this kind of nicely breaks down into four different parts, I’ll deliver them in parts:

Today, December 1st, 2013, marks AMAZING STORIES’ first annual re-birth anniversary.  One year ago today we turned the website on in a beta test/developmental role and our contributors got to work filling the site with what many have come to recognize as some of the best commentary, reviews, revelations and insight regarding the genre offered on the web today.

I’m quite proud of that, especially considering that my faith in Amazing Stories was based in large measure on the belief that there existed within fandom (both the fannish and pro varieties) a soft spot for our genre’s founding magazine.  I have not been disappointed in that belief.  In fact, I’ve been overwhelmed by it.  The depth of feeling for Amazing, the community’s desire to see it come back in a big way and the community’s willingness to help have frequently caused me to update and accelerate plans, just to try and keep up with them!

Our recognition of this first anniversary is far more of a tribute to our contributors, members and supporters than it is anything to do with longevity.  To each and every one of you – THANK YOU!

On January 3rd, 2014, Amazing Stories will officially turn one year old.  On that same day much earlier this year we opened the site up for public use.

Several very cool things have happened along the way:  in less than a year we’ve been joined by nearly 3,000 other fans, friends and fellow travelers (and the pace of membership is ramping up as well.  Last week we had two days in a row in which more than 20 fans signed on.  And since those days, our daily average has increased from less than 3 to more than 5, nearly doubling); our daily impressions have increased from a handful to well over 1,000 and we’re well on our way to having more than half a million views per month by this coming February.  Our number of contributors has grown from a dozen or so to 126 (and counting).  We’re averaging 7 posts per day and that’s increasing too.

Our first year anniversary also makes Amazing Stories eligible for Hugo Award nomination consideration at this year’s Worldcon (Loncon 3).  It’s considered gauche to push for nominations – so consider this nothing more than a statement of eligibility – and an endorsement of our contributors whose work is what someone would really be nominating if they chose to do so.

So once again – THANK YOU ALL!  It has been a truly AMAZING one year’s ride.

(Amazing Stories is:  1 year old as of this relaunch: it will be 88 years old come this March/April.  Issue could is at 609 and holding, with the last issue, published by Paizo Publishing, bearing the following – Volume 74, Issue 3, Number 609.  If you’ve not seen it mentioned before, when fiction publication resumes, it will do so beginning with Volume 75, Number 1, Whole Number 610.)

In an effort to keep the site current, give you all plenty of interesting stuff to read and view and to support future plans, we are once again changing our daily posting schedule around a bit.

Friday’s content will continue to increasingly address and focus on fannish issues – fanzines, clubs, conventions, fan history and the like.  Saturdays will be devoted to editorializing and a few additional information-based features currently in development and Sunday’s will be devoted to fiction excerpts alternating with the IAAA gallery of space art, news, past popular posts and highlighted websites of interest to fans.

Incidentally: we’re very interested in receiving news updates and information from fanzine publishers and from clubs regarding your events, accomplishments and activities; if we get enough of this kind of information we’ll devote a special posting to it in the future.

Up till now we have been publishing excerpts of works by authors closely associated with Amazing Stories.  We are now opening up that process to anyone who wishes to submit a recently released or soon-to-be-released longer work.

We want to accompany the excerpts with background information on the author, an introductory piece (explaining the nature of the excerpt and setting the scene for it) and a note or two from the author regarding their process, intent when writing the work or similar follow-on material.  We will also be happy to include promotional and purchasing information;  advertising space will be made available to the author/publisher (for a limited time) at no cost (followed by a discounted cost program for an extended period).

Details of this program will be published shortly on Amazing Stories.  Items submitted prior to the opening of the program will be placed in the circular file (questions regarding it will be answered).

From now until the foreseeable future, Amazing Stories will be publishing an editorial and/or an essay of commentary every Saturday.  The content of these editorials will be drawn from both in-house and from submissions.

The general theme of these editorials will be to address issues of concern to the genre community – and will not exclude humorous takes on the same.

I do feel it necessary to explain what an “editorial” is, what commentary is and how they will work here at Amazing Stories:

An editorial is the official (OFFICIAL) position of a publication on one or more (presumably related) issues.  It’s as if the magazine itself were to stand up and deliver a polemic on say, the sins of misrepresenting science fantasy as science fiction.

However, when it comes to this particular publication, the official editorial position of the magazine itself may very well NOT be representative of the views of all of Amazing’s contributors.

This is important to remember.  Amazing Stories’ content is provided by completely independent individuals who contribute because they want to see Amazing Stories come back and be successful. While they are staunch supporters and serve as valued and trusted advisers, they have no powers to compel me (except of course by offering persuasive arguments or walking out the door) and they don’t have the final say in setting editorial policy.*

Therefore, when you see an editorial offering on Amazing Stories, please keep in mind that it represents MY position on an issue. It would be extremely unfair of readers to tar all of the site’s contributors over a disagreement in editorial content.  Unless an individual contributor endorses those editorial views here on site, consider your disagreement (or even distaste) to be with me and not with them.

I’d like to think (and do!) that Amazing Stories’ readers, members and subscribers are a cut above the regular internet crowd; that they are people capable of distinguishing finer points, of avoiding black vs white argumentative styles, of understanding nuance and detail.  And that they are the kind of people who would much prefer to engage in meaningful discussion that leads to insight, education and elevation rather than simply trying to shout down and out-insult others with whom they may disagree.

The internet has already proven that it is possible to divide people with words; that it is possible to live life in a self-reinforcing information bubble that stunts growth and maximizes misunderstanding.  I’d like Amazing Stories to be a place that bucks that trend.  I’d like it to become a place where people can express themselves and their feelings and beliefs – even unpopular ones – in an environment that is capable of handling such in a mature manner.

And because I have the final say, that’s what we’re going to try to do.

*Please don’t read that to imply that there is any ongoing strife or disagreement among the folks who make this site happen.  I work hard to include everyone in the decision making process – even been yelled at for doing too much of that! – and I like to think that more often than not we arrive at consensus decisions that are at the very least acceptable to all.

I read, or heard, or watched somewhere this past week someone complaining that the problem with the United States now is that we need a vision, a direction, something we can all focus on as a possible goal…that this (forging a new nation, destroying fascism, putting a man on the moon) is what the United […]

What Happens Inside a Black Hole?