In this week’s viewing: Re: ZERO and The Lost Village fling confusing clues in all directions, and more! 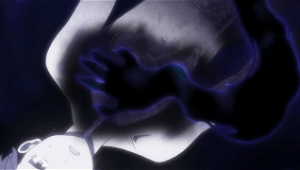 Re: ZERO -Starting Life In Another World- #7 – After making next to no progess in figuring out the mysterious nighttime attack, Subaru decides to try just hiding and saving himself for a change. Of course, that doesn’t work out either, when he discovers that he’s formed an attachment to the other inhabitants of the manor that leaves him genuinely regretting the consequences, even if they did rebound on the person who has now dismembered him twice.

At least Subaru does learn where his new power (probably) comes from. It’s a spell laid on him by the Jealous Witch. Which only leaves, why, and how? Is the witch actually present in town or in the manor, in disguise? Did Emilia actually give Subaru her proper name the first time around?

So Subaru heads for another incarnation, this time dying willingly for another chance to figure it all out. You know, when the protagonist flinging himself off a cliff to certain painful death is a proud and uplifting moment, you’ve got to admit that a show’s gotten pretty dark. There was no way of knowing (well, unless you’d read the source material, which is not available outside Japan as far as I know) that it was going to be like this. That full-hour preview was the best marketing decision of the year so far. 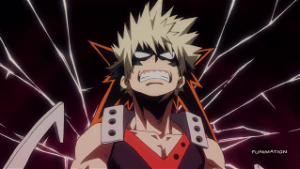 My Hero Academia #7 – It all boils down to Katsuki not being able to accept the compliment that Izuku is trying to give him. After years of being told he’s the coolest, the awesomest, the most gifted, he can’t stand anyone threatening that status, even if it’s because he’s inspiring them to try their best.

And he also can’t accept pity, because pity means he has flaws, and the entire basis for his  self-esteem is that he has to be perfect. That was why he reacted quite so badly to Izuku trying to rescue him from the slime monster.

Katsuki is set up for some major ego damage when Izuku does finally beat him in a straight-up one-on-one fight. (Outwitting him and Īda so that Ochako can score the victory won’t count; it’s got to be just him and Izuku, mano a mano.) After that, he should become much less insufferable. In the meantime, All Might has to manage a couple of students who look set to kill each other sooner than work things out.

Īda and Ochako are a nice balance to all the manly growling resentment going on between Izuku and Katsuki. Getting someone to give themselves away through ridiculous overacting is a new ploy to me, but hey, it worked. 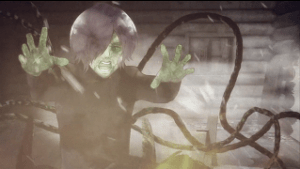 Kagewani -II- #7 – Being a horror show, the only reason Kagewani ever catches up with previously introduced characters is because something terrible is going to happen to them. This week it’s Satoru, the plant-monster-infected boy who spent some time as a prisoner of Sarugaku, was instrumental in the monster breakout at the end of last season, and has been living a quiet life in the mountains ever since. Unfortunately, a new monster and the Sarugaku staff track him down at the same time, and the result is a tragic end for yet another good person.

So now, any chance of a not totally unhappy ending really does come down to the hope that Kimura is slightly more motivated by rivalry with Homma or by wishing to impress his mentor than by his desire to grab all the monster goodies for himself, because if that wins out he’s going try to take over the kagewani, and he’s not going to be able to control it, and everyone’s going to be doomed.

One more note on Homma’s name: Alert reader Christopher Carson pointed out on social media in response to last week’s commentary that our Homma is probably named after Masaharu Homma, a WWII commander executed for his involvement in the Bataan Death March. 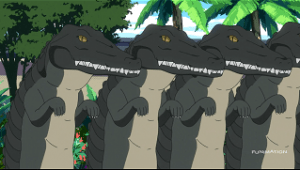 Concrete Revolutio #19 – Another little jump ahead and now it’s late 1973. Fūrōta has recently learned what really happened with the Tartaros Bugmen and has disappeared. The is the furthest forward the show has gone yet (excepting Jaguar’s origin story). The prime minister is being dragged down by scandals (as was the one in our timeline), but has a chance to distract the nation by unfreezing a hero from centuries before.

Iron Mask is an obvious nod to tokusatsu live-action superheroes, especially the Garo franchise, which features heroes wearing magical armor with a wolf-like mask. Considering what’s been done to other superhero tropes, she doesn’t come out of it too badly; sure, she learned that defeating the badguys didn’t end all war, but then she got to go hang out with Abel Tasman and see the world, and she’s taken the transition to the modern era quite well.

Speaking of time travel, Jaguar turns out to have been active and hanging out with superheroes as far back as the late Sengoku period. In his personal timeline, that was probably after his Infernal Queen days, when he started to take a more nuanced view of good and evil. But it’s a reminder that we don’t know what he’s been up to in other parts of the timeline. We know he was instrumental in creating the Superhuman Bureau, but was he laying the groundwork for that in earlier centuries, or was he trying (and failing) to create some similar organization back then?

It’s just a little aside that Earth Girl now has the ability to send people through time, but now that both she and Dr. Hitoyoshi have access to the technology, it’s probably going to play a significant role in the last few episodes. Possibly someone is going to change history to create our timeline.

Speaking of Dr. Hitoyoshi, it appears his mysterious maid has now joined the Bureau. Is she another superhuman? Is her power to just make no one notice her? It’s a little suspicious how she’s worked her way to the center of things and we’ve yet to really learn anything about her. 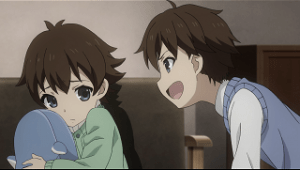 The Lost Village #7 – Mitsumune now gets a turn to reveal his backstory. As a little kid, he was constantly overshadowed by his twin brother Tokimune, so much that when Tokimune died while teasing him, he had to pretend to be Tokimune to keep his mom clinging to her last shred of sanity.

…maybe. He also remembers getting up on that railing from what appears to be Tokimune’s point of view. So which one is he, really? Does he even know? Does the author even know?

At least this explains the giant penguin, though not the portion of a face that appears with it. I guess that’s Masaki’s contribution, and we might get an explanation next week, if the villagers can hold off on the witch-burning long enough.

Although I’m still pretty sure she isn’t Masaki Aida, she does seem to know a bit about how Nanaki Village functions, which puts her one up on even Koharun and the tour leader. So maybe she’s a bit better at research, or maybe she has been there before, following in Aida’s footsteps.

An Interview with Timothy the Talking Cat

Hard work and developments at the University of Neuvo Leon signal a resurgence of Mexican science fiction.